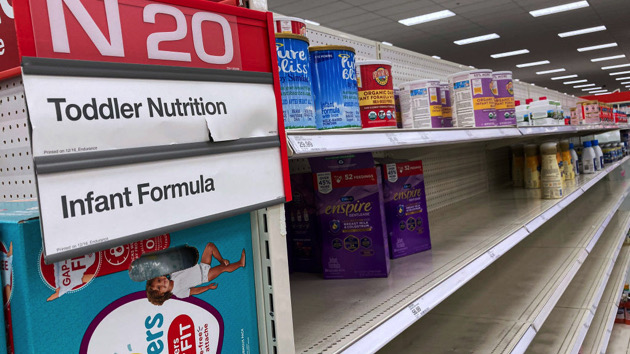 (WASHINGTON) — The House Oversight Committee is launching an investigation into the nationwide shortage of baby formula, and demanding records and information from four of the largest manufacturers.

“The national formula shortage poses a threat to the health and economic security of infants and families in communities across the country — particularly those with less income who have historically experienced health inequities, including food insecurity,” Chairwoman Carolyn Maloney, D-N.Y., wrote in letters to Abbott Nutrition, Mead Johnson Nutrition, Nestle USA and Perrigo, obtained first by ABC News.

The committee is investigating potential price gouging and the steps the companies have taken to address the shortage impacting families across the country.

“We have asked for a briefing by the end of the month, and we’ve asked three basic questions: Do they have the supply to meet the demand? Is there a supply chain problem that can be corrected? And what can we do to make sure this doesn’t happen again?” Maloney told ABC News.

President Joe Biden spoke to major retailers and manufacturers on Thursday about how to boost supplies for American consumers, according to senior administration officials, as some retailers have limited the number of formula purchases each customer can make.

“While we are a small player in the infant formula market, we are absolutely committed to doing everything we can to help get parents and caregivers the formula they need so their babies can thrive,” a Nestlé spokesperson told ABC News. “We have significantly increased the amount of our infant formula available to consumers by ramping up production and accelerating general product availability to retailers and online, as well as in hospitals for those most vulnerable.”

The White House has also called the Federal Trade Commission and state attorneys general to investigate potential price gouging. The Food and Drug Administration could also announce ways the U.S. can import more formula from abroad.

On Capitol Hill, Republicans blamed the Biden administration for the shortage, which is due in part to Abbott halting the production of four formulas at its production facility in February due to bacterial infections that led to two infant deaths.

“This should never happen in the United States,” said Rep. Elise Stefanik, R-New York, a member of House GOP leadership and mother of an eight-month-old boy.

Republicans Stephanie Bice of Oklahoma and Randy Feenstra of Iowa have also proposed legislation to streamline the import of formulas produced overseas.

The House Energy and Commerce Committee has also scheduled a hearing on the topic later this month, and could ask regulators and representatives from Abbott to testify, according to a committee aide.

Abbott Nutrition, Mead Johnson Nutrition, and Perrigo have not responded to ABC News’ request for comment.