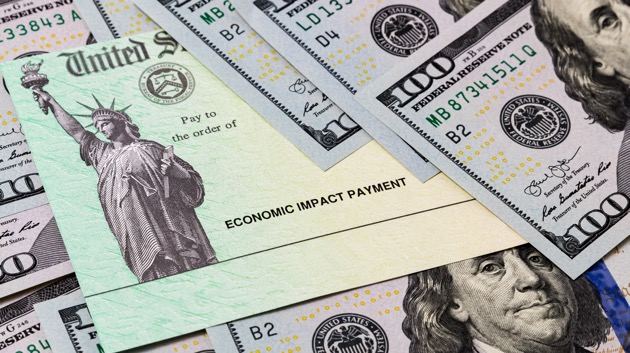 (NEW YORK) — Americans saved or paid off debt with most of their pandemic stimulus payments, according to surveys from the Federal Reserve Bank of New York.

For the second round of relief checks that gave $600 to eligible Americans and were issued at the end of December, survey respondents said they spent or planned to spend 25.5% of the total. Respondents said the other 74% went or would go toward paying down debts (37.4%) or savings (37.1%).

For the third round of stimulus checks, which gave $1,400 to eligible Americans in March, respondents said they spent or expect to spend 24.7% of the total, save 41.6% and use 33.7% to pay down debt. Of the amount used for spending, an average of 13% is expected for essential items and an average of 8% on non-essential items.

The latest data on the second and third checks is in line with results from an earlier survey from the New York Fed on the first round of relief payments issued last year — where respondents said they spent 29.2%, saved 36.4% and used 34.5% to pay down debt.

The findings were drawn from the New York Fed’s monthly Survey of Consumer Expectations, a nationally representative online survey of about 1,300 U.S. households. Data for the second and third checks were based on the January and March 2021 surveys, which respectively had 1,062 and 1,007 respondents. Data on the first round of checks was from the June 2020 survey, which was based on 1,423 respondents.

New York Fed economists said in a blog post announcing their findings that the results of the survey indicate an environment that continues to be marked by high unemployment and high uncertainty over the duration and economic impact of the pandemic.

“As the economy reopens and fear and uncertainty recede, the high levels of saving should facilitate more spending in the future,” the researchers added. “However, a great deal of uncertainty and discussion exists about the pace of this spending increase and the extent of pent-up demand.”