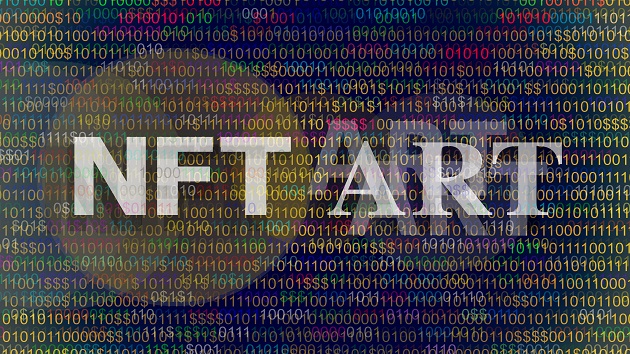 (NEW YORK) — Jazmine Boykins is a visual artist who goes by the name “blacksneakers.” She owns and operates a gallery in North Carolina, but recently she’s been selling art that exists purely online as non-fungible tokens, or NFTs.

“I’ve always known I’ve wanted to be an artist, probably since I was a little kid,” says Boykins. “However it didn’t morph into digital art until maybe a year or two ago.”

NFTs are digital assets that exist on the blockchain, which acts as a decentralized, public ledger that publicly details every time an NFT has been bought or sold. Blockchain technology also supports cryptocurrencies like Bitcoin and Etherium, but whereas those tokens are replicable, NFTs are limited in quantity.

NFTs can take the form of virtually any type of online content.

Boykins sells art in which she aims to highlight black narratives. Alternative band Kings of Leon released their latest album as an NFT. NBA TopShot is a marketplace that sells basketball highlights as NFTs. Last month, Time Magazine sold three digitized versions of their covers as NFTs, and the New York Times auctioned off a column as an NFT. Just this week, a man sold a photo of a cheese sandwich from 2017’s “Fyre Festival” as an NFT.

Seemingly the only thing that unifies NFTs is their relative scarcity.

“Some of them might be one of a small limited batch of twenty, some of them are even just one of one: truly unique. And you can point to the spot on the blockchain where that is and prove that,” says Roberts.

But owning an NFT isn’t the same as owning the rights to a piece of content. Kings of Leon fans can still buy the band’s latest album through traditional means or listen to it on most popular music streaming services. Basketball fans can still catch highlights on TV or YouTube. Even Boykins’ art is available to look at on her website or Twitter account for free.

As a result, the tech has its fair share of detractors. Many argue that simply tying a piece of content to the blockchain doesn’t give it value, especially when that content is easily accessible elsewhere. Even Boykins was skeptical at first.

“I honestly thought it was a little weird,” she says.

Roberts says much of the hesitation over NFTs has to do with skepticism about how much value a piece of digital content can hold.

“You can understand the technology, and try to bone up on that,” says Roberts. “But even once you learn the tech and you understand that… that still doesn’t mean that you want to buy or own an NFT or see it as emotionally appealing. You really just have to get past the mental hurdle of non-physical ownership,” [he said.]

Even then, it’s not for everyone says Roberts.

“There’s a lot of people who, even once you get to that point, they say ‘it doesn’t make much sense to me.’ And I think that’s fair,” he says.

Boykins says the value of NFT, for her, comes from how they help legitimize digital artwork, which she feels has been maligned by critics.

“You have the whole stigma against digital art: whereas digital art is not as hard or complex as traditional. Although both mediums can be pretty intense depending on how you go about it,” she says.

Despite the stigma, NFT art has raked in big money. In March, digital artist “Beeple” sold a compilation of his works at auction for $69 million. The sale represented the third-highest amount ever paid to a living artist – digital or otherwise – behind only Jeff Koons and David Hockney. Boykins said she has taken solace in the recent success of NFT art.

“To now see that is very comforting because, regardless of how it’s done, these artists get to be acknowledged for their work, recognized for their skill and their ability,” [she said.]

Roberts says one of the major appeals of NFT art is that it provides a more direct connection between creators and their customers.

“When we talk about NFTs in the music world or the art world, that right now is touted as one of the big appeals, is that this is a way to actually give royalties directly to the creators.”

NFTs, and the underlying blockchain technology, have also drawn criticism for how much energy they require to function.

“There are computers all around the world that are basically racing to sort of create the next block in the chain,” says Brian Khan, managing editor at Earther and is part of the faculty at the Columbia Climate School at Columbia University.

Blockchains use a “Proof of Work” model, which requires numerous massive computers working simultaneously to add the next line in the digital “ledger.” The process allows the technology to remain decentralized and secure, but it also eats up a significant amount of computer power.

Kahn says that results in pollution.

But he says it doesn’t have to be this way. Other, more efficient processes have the potential to cut down on the tech’s energy consumption, such as “Proof of Stake.” That model selects a computer at random to add each block to the chain, eliminating the need for multiple energy-hungry systems to run at the same time.

“That’s the thing that I think, you know, excites a lot of people in both the climate space and in the blockchain space, to think about how do we clean this up while also still maintaining the thing that makes this interesting in the first place,” says Kahn.

Khan says he’s optimistic about the future because the sudden popularity of NFTs has thrust the blockchain’s environmental shortcomings into the spotlight.

“We’re having this talk comparatively at the beginning of something that could grow in a more sustainable fashion. So that’s why I have a little bit of a, I guess hope so to speak about this space and what could come next.”

Boykins says she’d be happy to see the blockchain that supports her NFT art become more environmentally friendly. And she has high hopes for the tech in general.

“It’s going to get bigger and bigger, and probably become the new mainstream way of collecting artwork I feel,” she says.