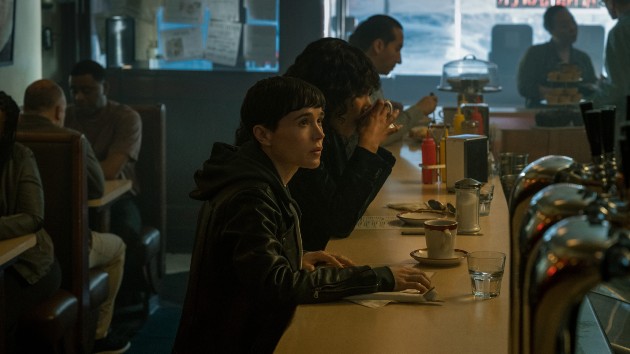 The Oscar-nominated actor appeared on GMA the same day alongside co-star Emmy Raver-Lampman, who plays Allison Hargreeves or Number Three, to discuss the new season.

Page, who came out as transgender in December 2020, announced in March that his character would transition in season three and be known as Viktor Hargreeves. Viktor goes by he/him/his pronouns and is also referred to as Number Seven.

“So far it’s seemed really positive, which makes me feel happy in terms of the representation and hopefully it meaning something to people,” Page said of how audiences have received him as Viktor thus far.

Page said working with showrunner Steve Blackman and Thomas Page McBee — a writer with whom Page previously worked on Tales of the City — on Viktor’s storyline and trans identity was “such an incredible experience.”

Raver-Lampman, meanwhile, teased that The Umbrella Academy season three will feature the “wild and crazy” Hargreeves family trying to get back to their original timeline. She also gushed about her friendship with Page, whom she called “just the best.”

“I’m just so lucky getting to have the privilege to not only work with you, but call you one of my dearest friends,” she told him.

The Umbrella Academy is based on the popular comic book series of the same name and was created and written by My Chemical Romance‘s Gerard Way.