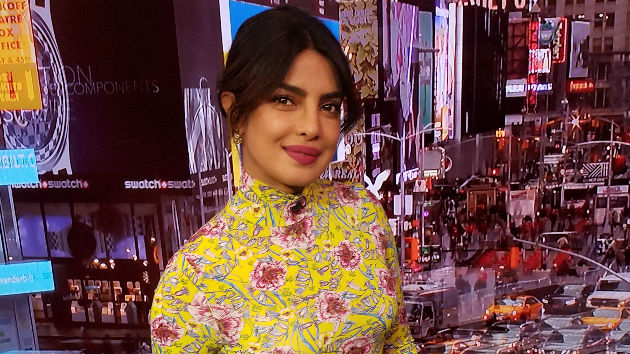 “They are dating and it’s brand new,” says the insider, adding, “It’s a good match and they are both interested in each other.”

The report follows multiple sightings of the 25-year-old “Jealous” singer and the 35-year-old Bollywood superstar-turned ABC TV spy together over the Memorial Day weekend.

On Friday, Jonas and Chopra were spotted attending the Beauty and the Beast Live concert at the Hollywood Bowl, according to another concertgoer who tells the magazine, “They walked in together just before the performance was starting. They looked great together, but no hand-holding or obvious PDA.”

“The two were seen heading to the concessions stand during intermission before returning to their seats to finish taking in the show,” the eyewitness continues. “They snuck out right as the show was ending.”

Then on Saturday, the pair reportedly attended a Los Angeles Dodgers game, according to a source who saw them “talking really closely” and that they were “very smiley and very happy.”

“They weren’t trying to be private as they were in a pretty public place, but they were talking to people around them, sitting closely and they both just seemed super happy,” adds the onlooker.

When questioned by Jimmy Kimmel on arriving at the Met Gala with Jonas last year, Chopra told the Jimmy Kimmel Live! host, “Yeah, we were on the same table and we already know each other. So he was like ‘Hey, you wanna go together?’ And I was like, ‘Yeah, OK, let’s go together.’ It ended up working out.”