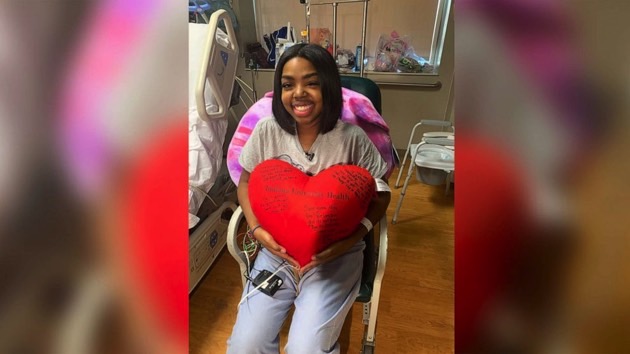 (AVON, Ind.) — An Indiana women who suffered a heart attack at age 14 is now celebrating a new start in her life after undergoing a heart transplant.

Jaelyn Kinchelow, of Avon, Indiana, was running at her middle school track practice nearly a decade ago when she said she felt a tightness in her chest.

“All I could remember was myself slowing down because I just couldn’t keep up,” Kinchelow told Good Morning America. “Shortly after that, my legs gave out and I fell to the ground.”

Kinchelow was transported by ambulance to a local hospital, where she was diagnosed with a heart attack and quickly underwent open-heart surgery.

Surgeons repaired a torn coronary artery wall using a vein from Kinchelow’s leg, but permanent damage to her heart remained.

“After surgery my heart was only functioning at about 5%. They put me on an ECMO machine,” Kinchelow said, referring to an extracorporeal membrane oxygenation machine, which removes carbon dioxide from the blood and sends back blood with oxygen to the body, giving the heart and lungs time to heal in critical care situations. “They didn’t think I was going to make it so they had to do all they could to keep me alive.”

After spending nearly one month in the hospital, including eight days in a coma, Kinchelow was able to go home.

She went on to high school, participating in show choir and roller skating, and earned her bachelor’s degree, with a dream of becoming a nurse, like the ones who had helped save her life.

At the start of her last semester of nursing school, in January, Kinchelow said she again began to feel a shortness of breath.

“I couldn’t do my daily activities. I was too tired to talk upstairs,” she said. “I went to the hospital and spent three weeks in the hospital in January and they decided I needed to be on the transplant list.”

Kinchelow was admitted to the hospital in mid-January and spent the next two months there, waiting for the right heart to become available.

“The call is the thing you look forward to when you’re waiting. You just never know when it’s going to come,” she said. “They were saying that with my blood type, it’s like one of the longest waits. That was one of the things I was just scared of.”

On March 27, Kinchelow got the call she had been waiting for from a woman named Debbie, who was Kinchelow’s transplant coordinator at the hospital.

“They handed me the phone and she said, ‘I have some good news for you,’ and I said, ‘Debbie, if you’re not calling about a heart I don’t want to hear it,'” recalled Kinchelow. “I just lost it after that.”

The next day, Kinchelow underwent a 12-hour surgery to receive her new heart. Her old heart was so enlarged she said doctors took around six hours to remove it.

“Her story is pretty unique,” said Dr. Robert K. Darragh, Kinchelow’s pediatric cardiologist at Riley Children’s Health and an associate professor of clinical pediatrics at Indiana University School of Medicine. “There are some questions medically that we still don’t have perfect answers for her about how she got to the point of needing a transplant.”

As Kinchelow recovered from the transplant, she said she received a letter from the family of her heart donor, something she said was surprised to receive since typically it takes over a year for a connection to be made.

“They said the family jumped through hoops to make sure they got a letter to me,” she said. “That was a huge surprise and so emotional for me.”

Kinchelow said she is now sharing her story to raise awareness about both organ donation and the risks of heart disease among women.

Heart disease is the leading cause of death for Black women in the United States, according to the Centers for Disease Control and Prevention.

Across all races, heart disease causes about one in every five female deaths each year, while only about half of women know that heart disease is their No. 1 cause of death, according to the CDC.

And in the U.S. alone, more than 100,000 adults and children are currently on the national transplant waiting list, according to the Department of Health and Human Services.

“If more people were donors, there wouldn’t be a waiting list, and some people don’t make it because there aren’t enough donors,” said Kinchelow. “I want to put it out there, just think about it and do your research.”

Kinchelow was discharged from the hospital in May, five months after she was first admitted and put on the transplant list.

She said she plans to “pick up where she left off” and finish her nursing degree and then begin her career helping to save other people’s lives.

“I would say to anybody, don’t take your health lightly,” said Kinchelow. “Although I was 14, I knew something was not right. It’s important to pay attention to anything that feels different.”