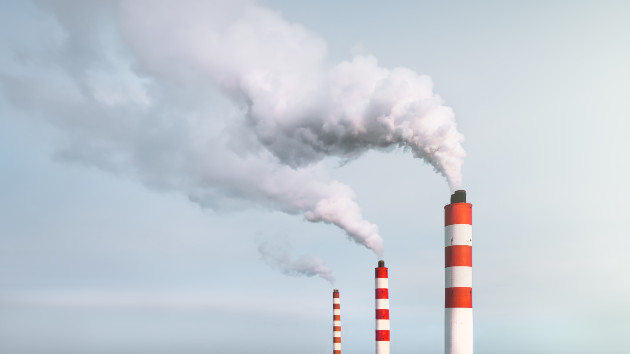 (NEW YORK) — Almost half of Americans — 137 million people — are experiencing more days of “very unhealthy” and “hazardous” air quality than in the previous two decades combined, according to a report published this week by the American Lung Association.

This particle pollution or “particulate matter” comes from wildfires, wood-burning stoves, coal-fired power plants and diesel engines, and can cause multiple health problems, including asthma attacks, heart attacks and strokes. With repeated exposure, it can cause lung cancer.

“We’ve seen much better air quality in most areas today than when we started the report. But over the last five years, we’ve seen an uptick, and we attribute a lot of that to climate change. We’ve had some of the hottest years on record — creating dry conditions that lead to drought and wildfires,” said Paul Billings, senior vice president of public policy for the American Lung Association.

Last summer, over 100 wildfires in the West carried smoke and ash thousands of miles, affecting places as far as New York City, where the air quality index (AQI) for fine particulate matter reached levels greater than 150, which is 10 times above health exposure recommendations, according to the World Health Organization’s 2021 updated Air Quality Guidelines. The new guidelines reflect strong evidence that air pollution can have major health consequences, including premature death, at even lower concentrations than previously understood.

Dr. John Balmes, a professor of environmental health sciences at the University of California in Berkeley and a volunteer medical spokesperson for the ALA, has studied the effects of California’s air pollution for over three decades and said all the progress in the Mountain West “has pretty much been undone by wildfires.”

Balmes said his wife has “fairly severe asthma,” and because of the wildfires in California, they’ve had to increase the central filtration in their ventilation system and now have two portable HEPA filters.

“She always wears an N95 when she goes out during wildfires, and she tries not to go out,” he said.

Echoing earlier research, the report also found that people of color were 61% more likely than white people to live in a county with a failing grade for at least one pollutant. Balmes said that because of where they live, “Low-income communities of color have the highest exposure to diesel exhaust” and often do not have “ventilation and filtration appliances to reduce exposure in their homes.”

Dr. Franziska Rosser, assistant professor of pediatrics in the division of pulmonary medicine at University of Pittsburgh, researches the effects of air pollution on children with asthma. She recommends that parents of children with asthma check the AQI by going to AirNow.gov and to either avoid outdoor air pollution exposure when it reaches unhealthy levels or choose activities where kids are not breathing as heavily.

“We’ve long advocated for much more protective standards,” Billings added, noting that the organization is asking the Biden administration to strengthen the national limits on particulate matter air pollution.

“The public has a right to know when air pollution threatens their health and the health of their children, seniors and families,” he said.

In a statement, the Environmental Protection Agency said, “Improving air quality is a major priority for EPA and we appreciate the ALA’s focus and attention on air quality and health.”