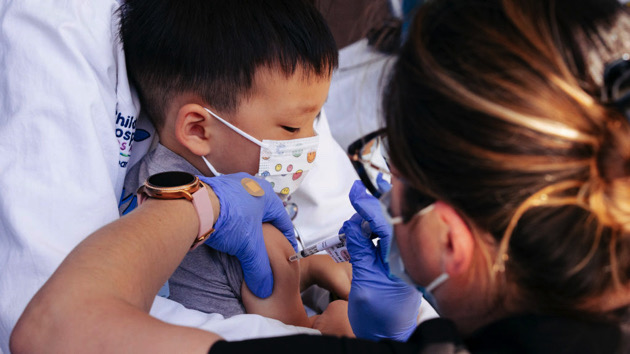 Wesley Lapointe / Los Angeles Times via Getty Images)(NEW YORK) — Since the COVID-19 vaccine was authorized for children under age 5 last month, states have been able to pre-order doses directly from the federal government.

Roughly 300,000 children between ages six months and four years have received at least one dose of a COVID-19 vaccine as of Thursday, according to the Centers for Disease Control and Prevention.

That is equivalent to about 1.5% of the roughly 19.5 million children in the United States who recently became eligible.

Despite the low number, states are continuing to order vaccines as they expect infection numbers to increase and confidence to build over time.

ABC News reached out to all 50 state health departments between June 21 and July 7 asking how many doses had been ordered for children under age 5 and received data from 41 of them.

Those states have ordered at least 3.09 million vaccine doses for the youngest age group to be distributed to providers, hospitals, vaccination centers and more, according to the results.

This number does not include retail pharmacies in the states who have pre-ordered doses through the Federal Retail Pharmacy Program.

“Having millions of doses out of the gate is incredibly helpful,” said Dr. John Brownstein, an epidemiologist at Boston Children’s Hospital and an ABC News contributor. “It’s a good start. My gut feeling is that there’s going to be an initial rush, like when doses became available for other age groups, and then a little bit more of stable access.”

As of June 21, California — the state with the largest population — has ordered more than 400,000 doses of the vaccine, the state’s Department of Public Health told ABC News.

Of those doses, more than 221,000 doses are of the two-dose Moderna vaccine and 176,00 are of the three-dose Pfizer vaccine, the California DPH said.

The doses “can be administered at the more than 8,500 vaccine sites throughout the state, with additional doses becoming available in subsequent weeks,” the DPH said in a statement.

Meanwhile the state with the smallest population, Wyoming, has ordered the fewest doses at 3,700 as of June 30, state health officials told ABC News.

The state’s health department there said 2,000 doses were of the Pfizer vaccine and 1,700 were of Moderna’s vaccine.

Brownstein said it’s incredibly important for young children to get vaccinated because they are also susceptible to severe effects of COVID-19.

“There’s always been this view that, for some reason, adults are the hardest hit with COVID-19,” he said. “And while that may be true proportionally, children also suffer severe consequences, sometimes deaths, even long COVID.”

He added, “Giving our kids that baseline protection through vaccines is incredibly important … especially as we head into the fall.”

Florida is the only state in the U.S. that didn’t preorder any COVID-19 vaccines for young children, federal officials told ABC News last month.

“The Florida Department of Health has made it clear to the federal government that states do not need to be involved in the convoluted vaccine distribution process, especially when the federal government has a track record of developing inconsistent and unsustainable COVID-19 policies,” a spokesperson for the department told ABC News in a statement.

“When states are administering vaccines, they can optimize vaccination sites, making sure they’re available to lower income families, minority families,” he said. “In the absence of that, higher income families will always be able to find time off to get off work and find vaccines for their kids. Ultimately what will happen is a lack of vaccine equity.”