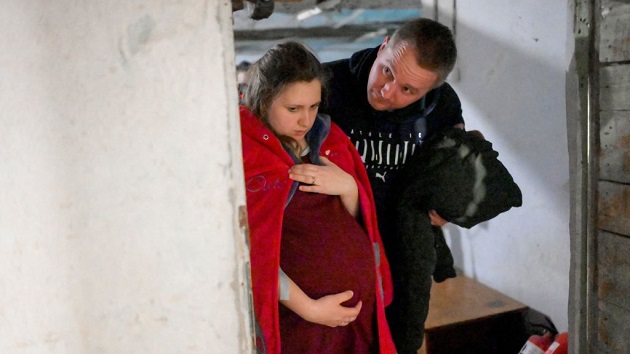 (NEW YORK) — As the war in Ukraine rolls into its second month, pregnant women fleeing the violence face innumerable challenges given their unique health status.

Pregnant refugees and their unborn children are uniquely vulnerable to higher rates of death, disease and mental health challenges that can persist after birth.

“There’s obviously the risk of physical harm. … [The] placenta can separate causing something called placental abruption that can lead to hemorrhage and death for both mom and baby,” said Dr. Elizabeth Langen, associate clinical professor of maternal-fetal medicine at the University of Michigan.

Prenatal stress is also associated with an increased risk of preeclampsia — dangerous elevations in blood pressure during the second half of pregnancy — as well as gestational diabetes, according to a peer-reviewed study in the Journal of Caring Sciences. Both of these conditions confer risk to both the mother and fetus.

Reports from Ukraine indicate women are giving birth in makeshift shelters in basements and subway stations. Equipment, facilities and qualified providers are scarce.

Injured pregnant women were photographed evacuating from the Mariupol Children’s Hospital after it was destroyed by airstrikes earlier this month. The U.N. High Commissioner for Human Rights has reported over 75 verified incidents of attacks on health care facilities since the start of the invasion, all of which would constitute war crimes.

“Pregnant women are extra vulnerable because they’re going through a period of time where they can’t run away as fast and they are going to need medical help and are going to have a major life event that sometimes requires a lot of resources from a hospital,” said Langen. “If you’ve destroyed their hospitals and their infrastructure, you’re going to see more women die in childbirth.”

Even after relocation, expectant mothers face many barriers to care. Anissa Dickerson, a certified nurse midwife and the co-director of the Refugee Women’s Health Clinic at Boston Medical Center, has seen many of these issues working with refugees in the past.

“We have patients show up for their first prenatal visits and they might be in their late second trimester, early third trimester. They may have had one ultrasound but they didn’t have anything else or they had some lab work, but we’re not really sure what it is,” said Dickerson.

“There is some data out there saying that displaced people have a higher rate of preterm birth, low birthweight and stillbirth,” said Dickerson, an observation corroborated by a study in the journal of Social Science and Medicine.

Perinatal complications are often compounded by a lack of essential resources.

“If there is malnutrition because of inadequate access to food, that malnutrition for moms can lead to growth problems for the baby while they’re in utero,” said Langen. “As those kids grow up, they seem to have the opposite problems. They’re more likely to have obesity and diabetes and problems with their metabolism, because they lived in such a deprived state while they were a fetus.”

Refugees experience higher rates of depression, anxiety and post-traumatic stress disorder, according to a peer-reviewed study in the journal BMC Medicine. In new mothers, these conditions can have long lasting repercussions for both her and her newborn.

“If mom has postpartum depression or postpartum PTSD, which is certainly more likely if you’re delivering in a war zone, that impacts how she’s able to bond with the baby, and how she’s able to provide the care that she would want to after the baby’s born,” added Langen.

In light of the U.S. recently announcing its plan to accept up to 100,000 Ukrainian refugees, Dickerson hopes for an opportunity to address these challenges and provide holistic care for these women and children.

“They’re more than their immigration status,” she said.

Sophia Gauthier, M.D., is a pediatric resident physician at St. Christopher’s Hospital for Children in Philadelphia as well as a contributor to the ABC News Medical Unit.