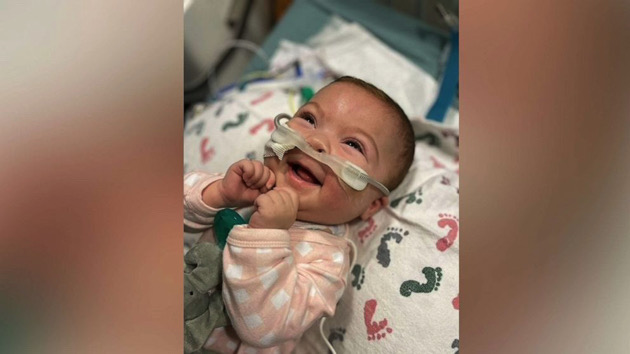 (SAN DIEGO) — A California girl has beaten the odds to reunite with her twin and return home with her family after a six-month stay at a San Diego hospital.

Charlotte and her twin sister, Olivia, were born to Karla and Joshua Valliere last December, but in January, Charlotte was suddenly admitted to Rady Children’s Hospital with breathing difficulties and a respiratory infection.

At first, the Vallieres didn’t know what was wrong. Olivia was healthy, and although Charlotte had been born with one lung, she hadn’t had any issues after birth.

“Her one lung grew like 1.5 sizes, so it was compensating for the lack of the second one. So [doctors] did run all the studies. She was totally fine — oxygenation, everything 100%, so we were cleared to go after four days in the hospital,” Karla Valliere told Good Morning America. “It was six weeks at home — total bliss. Everything was great … and all of a sudden she started having breathing problems.”

The Vallieres took their daughter to Rady on Jan. 29, and she was admitted and placed on an extracorporeal membrane oxygenation machine, or ECMO.

Dr. Matthew Brigger, chief of the pediatric otolaryngology division at Rady Children’s Hospital, started seeing Charlotte, who was just six weeks old at the time. Charlotte would eventually be diagnosed with tracheal stenosis and complete tracheal rings. This meant she had a birth defect with her airway where the rings in her trachea were abnormal and she had an abnormal narrowing of the trachea, or windpipe. She also had a blood vessel wrapped around her trachea.

“This set of anomalies, with the single lung, with the way the aorta was wrapped around the trachea itself and the trachea being this narrow, is actually fairly rare,” Brigger told GMA.

“We knew that she had a critical airway that if anything were to progress, trying to keep her intubated, that was gonna potentially injure the airway and give us more difficulty in repairing it. So the ECMO was sort of a bridge to surgery,” he continued.

But the surgery was a major one and in order to do it, Brigger and the rest of Charlotte’s doctors had to wait until she was big enough, since she and her twin had been born a few weeks early and therefore, Charlotte was small for her age.

“Initially I [told the parents], ‘Well, if we can get through surgery, I’m gonna give her 50-50,” Brigger said. “[But] I’m thinking more 20% of getting through surgery at the time, just knowing how much that we had to go through.”

Despite the low chance of survival, Charlotte’s surgery was a success.

“Fortunately, Charlotte’s a fighter and we got to do the surgery. She sailed through surgery,” he said.

The Vallieres said that throughout the monthslong stay in the hospital and all the ups and downs, with Charlotte’s complications, multiple surgeries and treatment, they drew strength from their own daughter.

“The thing that I think that I believe got us through was her. She never gave any sign of weakness,” the mom of two said.

After spending 185 days in the hospital, Charlotte was finally discharged on Aug. 1, and her parents and twin sister were there to celebrate and bring her home.

“It was just a lot of emotions and it was just a roller coaster. But now we have them together, so it’s worth it,” Karla Valliere added.

Today, Brigger said he doesn’t anticipate Charlotte needing a second lung at all and her future looks bright.

“Prognosis is very good. She may not be running marathons in the future but she is Charlotte so it’s hard to say. She’s proved people wrong all along. I expect her to be able to live a good life,” he said.