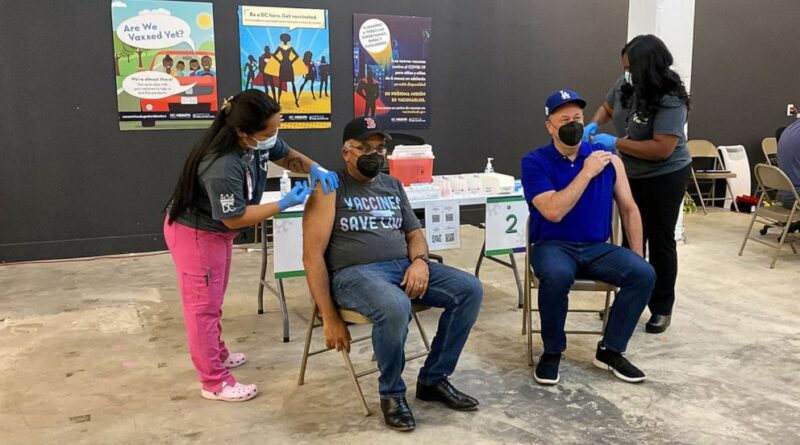 The sooner the better, Jha said, urging people to get a booster between mid-September and mid-October, “but no later than the end of October for maximum protection” ahead of the holidays, he said in an interview with ABC News following his own vaccination.

For people who have recently had COVID, Jha suggested following the guidance from the Centers for Disease Control and Prevention and waiting at least 90 days, or three months, before getting the updated vaccine. Other experts have suggested that waiting four to six months will allow people to mount a stronger immune response to the vaccine.

Waiting longer, Jha said, increases the chance of getting reinfected — and ultimately, “it’s very hard to time the market,” he said.

Jha, who got his updated shot on Friday morning at a clinic in Washington, D.C., alongside second gentleman Doug Emhoff, described the new vaccine as a vital lever in the forecast for this winter’s COVID spread.

While some modeling shows a potential for a large surge this winter, Jha said, others show only a “modest bump” — and the difference could be determined by how many people get an updated vaccine ahead of the colder winter months, a time when the virus has ticked up the past two years.

“If you go get these vaccines, you actually can influence what happens,” Jha said.

“There is nothing fated about what’s going to happen. If a large proportion of Americans go out and get these vaccines, it will have a significant beneficial effect on keeping infections low.”

Twenty-five million vaccines have shipped out as of Friday, according to the White House, and Jha said he’s been pleased to see that states are already submitting reorders.

But the latest numbers on just how many people have actually rolled up their sleeves for a shot aren’t expected until next week, Jha said. And while the booster campaign is expected to ramp up over the coming weeks, past metrics show Americans are booster fatigued: slightly less than half of vaccinated people have gotten a first booster shot, while one-third of people over 50 have gotten a second booster shot after becoming eligible this past spring.

The newest shot, which targets both the most dominant variant, BA.4/BA.5, and the original COVID strain, carries the potential of being the only shot Americans need this year, similar to an annual flu shot, and offering greater protection against COVID because it matches the virus that’s circulating now.

While experts caution that another new variant could always buck the plan, introducing new factors like heightened spread or evasion of immune protection, Jha said the country is already in a position of giving young, healthy people one shot a year and doesn’t think even a new variant would change that.

For people under the age of 50, they last became eligible for boosters in the fall of 2021, just as omicron was gaining steam. Those people have only just become eligible for another booster shot with the introduction of the updated bivalent booster this fall — one year later.

“I feel very confident based on everything we have that for the average-risk person, even an Omicron-like variant is unlikely to lead us to suggest that [young, healthy] people are going to benefit from a second shot within a year,” Jha said. “I think that is both unrealistic and not necessary.”

That said, older people may see a faster waning of protection from their vaccines, as has been the case throughout the pandemic, warranting another shot to re-up protection sometime in the spring, Jha said.

Though there isn’t evidence from a large-scale clinical trial yet to demonstrate just how much better protection will be from the bivalent boosters, Jha said he believed there was “strong consensus” that they would be better.

He pointed to evidence on safety and efficacy about the millions of vaccines that have already been distributed, as well as a clinical trial on bivalent vaccines that targeted BA.1, an earlier omicron subvariant, which vaccine companies later forgoed in favor of the newer strains, BA.4 and BA.5.

“If you look at the totality of the evidence, everything we know about the initial shots, if you look at the way the BA.1 bivalent clinical trials, what they showed us about how it generates immune response, everything suggests that BA.5 bivalents should provide a much higher degree of protection,” Jha said.

Shots for people under 12 are expected this fall, though vaccine companies must first submit data on the younger age groups to the Food and Drug Administration, which will then review the data for authorization and eventual recommendation from the CDC.