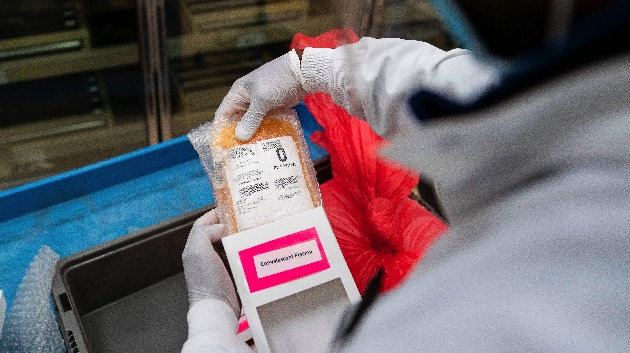 (NEW YORK) — Medical researchers say there is renewed promise in reducing COVID-19-related hospitalizations and deaths by increasing the use of convalescent plasma treatments early on in a coronavirus infection.

And some medical experts are pushing the federal government to allow more patients to receive the treatment, as lab-based monoclonal treatments such as Regeneron have seen lessened effectiveness against the omicron variant.

Researchers at John Hopkins University on Tuesday released the results of a 16-month nationwide study on convalescent plasma use on COVID-19 patients and found it had a 54% relative risk reduction in COVID-19-related hospitalizations.

Dr. Arturo Casadevall, one of the study’s co-authors and chair of the department of molecular microbiology and immunology at Johns Hopkins Bloomberg School of Public Health, told ABC News that the results are promising, especially if the plasma is used early on in the infection period.

“The results show a 54% efficacy in reducing hospitalization if you give it up to day nine. It is clear and highly significant,” he said. “If you look to less than five days, the efficacy is much, much higher.”

Researchers observed 1,181 adults who contracted COVID-19, half of whom were given polyclonal high-titer convalescent plasma that contained a concentrated mixture of SARS-CoV-2 antibodies. The other half were given placebo control plasma with no COVID-19 antibodies,

After the Food and Drug Administration granted emergency use authorization for monoclonal treatments made by Regeneron and Eli Lilly, the use of plasma treatments for hospitalized coronavirus patients decreased.

However, Casadevall, warned that plasma treatment options need to be more strongly considered as the omicron variant has made monoclonal antibody treatments less effective.

George Yancopoulos, the president and chief scientific officer at Regeneron, told ABC News his company does have a collection of antibodies that are effective against the omicron variant, but it will take at least a few months before it is authorized and shipped.

“People that are high risk who come down with COVID who receive plasma in lieu of monoclonals hopefully stay out of the hospital,” Casadevall said. “And so plasma holds the line until Regeneron comes out with a new set of monoclonals.”

The John Hopkins study comes two weeks after the World Health Organization advised against the use of treatments that use COVID-19 survivors’ plasma. The WHO said it used data from 16 trials involving more than 16,000 patients around the world and determined that the treatment did not “improve survival nor reduce the need for mechanical ventilation.”

Casadevall told ABC News that the WHO did not use the data from the John Hopkins research in its decision.

“We hope that they reverse their recommendation against convalescent plasma in light of the Hopkins study results, since this therapy is inexpensive and available in resource-poor countries where plasma can provide a major tool to reduce hospitalizations and mortality,” he told ABC News.

Andrea B. Troxel, a professor of population health and the director of the division of biostatistics at NYU School of Medicine who has also written studies on convalescent plasma treatments for COVID-19 patients, told ABC News that previous studies on the effectiveness of plasma treatment have been mixed, but she found the results of the John Hopkins University study to be very encouraging.

Troxel said the issue with plasma treatments is determining the right time for their use during the infection period, and the data in the new study gives doctors a better idea of its effectiveness.

“This is the sweet spot for plasma, early enough in the infection the plasma can do what it needs to do. For other studies, it maybe was a little late,” she told ABC News.

Casadevall said the Food and Drug Administration should extend its emergency use authorization for plasma treatments to the outpatient space to ensure the treatment is given at the right time.

“There is a strong benefit for these patients in receiving plasma,” she said. “It is safe and there is no reason not to trust this evidence.”