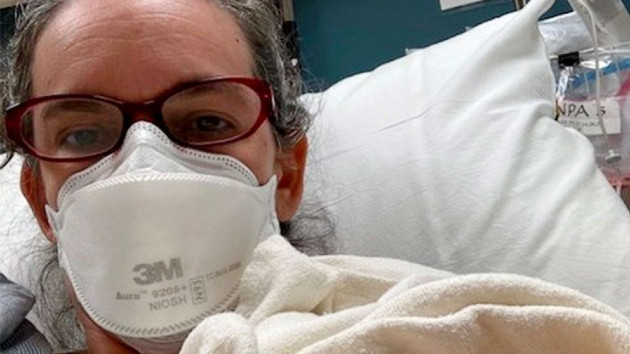 (NEW YORK) — Jennifer Dornan-Fish is marking two years grappling with the long-term impacts of COVID-19 on her body.

She said her road to recovery from the virus has been mired in a “bewildering array” of agonizing and debilitating new symptoms — which gradually emerged after she had already fended off her initial infection.

A couple weeks after testing positive in March 2020, it seemed like Dornan-Fish had made it mostly out of the woods. However, the healthy 46-year-old said she struggled with COVID fatigue and labored breath but avoided hospitalization.

She said she was “convincing myself I was on the mend” and was anxious “to jump back into” her busy life finishing her next book and homeschooling her son. But then, “everything started going haywire.”

Dornan-Fish told ABC News her doctors have diagnosed her with Post-Acute Sequelae of SARS-CoV-2 infection (PASC) — the official term for long COVID symptoms. She has been tested for autoimmune issues like lupus, multiple sclerosis, Ankylosing spondylitis, along with blood cancers, to rule other, non-COVID causes out.

“It wasn’t like I just crashed all at once,” Dornan-Fish, now 48, said. “One little thing went wrong. Then another. And it just got worse and worse until – I have honestly very little memory of the first few months. I was so out of it.”

She began getting painful, itchy rashes on her thigh and shoulder, and her gums.

Then came “coat hanger pain” in her shoulders and neck. Then the brain fog. The front of her throat felt tight, as though an invisible hand was clamping down on her breath.

“I could barely talk,” she said. “The brain fog has really, to be honest, been the most disturbing symptom of them all. I make my living writing, thinking, so to not be able to do that was terrifying.”

Getting out of bed for more than a few minutes would take everything she had.

“My husband had to feed me, he would bring me meals. I could barely sit up. I couldn’t wash myself. I couldn’t take care of my child,” she said. “I was just surviving.”

In that first year of the pandemic, scant medical treatment existed for the mysterious virus which had overrun intensive care units around the world — let alone a tried-and-true way to fight COVID’s prolonged effects.

Dornan-Fish saw a “round-robin” of specialists — a “trial and error” process, which she said has been exhausting.

“I tried a million different things,” she said.

She started getting new allergies: she was hospitalized for a reaction to baby aspirin, which she had been taking to avoid the blood clots she had heard were associated with COVID. She had a reaction to her family’s longtime kitchen cleaner.

“I almost went into anaphylaxis from a scented trash bag,” she said.

About nine months out from her initial COVID infection, Jennifer started having tremors.

“My doctor called them ‘seizure-like,'” she said. “We don’t know what they were.”

Over time, her allergies seemed to start improving. Her brain fog got a little better. But the tremors got “much worse,” and took new forms.

“I’m not actually shaking on the outside, but it feels like a vibrating cell phone in my chest. Or, like there’s an earthquake inside me,” she said.

“For a little while — and it has gotten better — but a bird would cheep outside the window, and I would jump,” she said. “Not to be glib, but I’ve lived in the jungles of Belize and have killed poisonous deadly snakes with machetes. Like, I do not jump at cheeping birds.”

Her son, now 13 years old, has seen how post-COVID has ravaged her health.

What was once understood as a respiratory virus has emerged, for many, as an all-out attack on the system. Researchers are pushing to find better treatments to help long-haulers — and better answers to understand why they’re impacted for so long, with more than a billion federal dollars devoted to studying COVID’s prolonged health consequences.

Some theories from experts include a person having a particularly high viral load when they first get sick; or lingering COVID viral particles sticking around in the body even after a person has “cleared” their initial infection; or another virus that was previously latent getting reactivated, like Epstein-Barr.

After even a mild initial infection, many COVID survivors across a diverse age group still report exhaustion, cognitive problems and other symptoms. Studies so far estimate as much as 10% to 30% of people who get COVID may later develop long-hauler symptoms.

It has not been a comfortable adjustment for Dornan-Fish. Before COVID, she recalled being able to hike and run for more than 10 miles at a time.

Of the treatments she has tried, it’s “hard to tell whether it’s my body naturally healing? Or are these things that I’m trying working?” she said.

Meanwhile, physicians have focused on managing symptoms. While firmer treatment protocols are under review, at this time, there are no conclusive data or recommendations regarding the use of supplements in the treatment of long-COVID.

At first Dornan-Fish said she took a beta blocker, a medication sometimes used for postural orthostatic tachycardia syndrome (POTS), which helps to reduce heart rate. That seemed to help, she said, but had to stop when it dropped her blood pressure too low.

D-ribose, a carbohydrate naturally produced by the body and supplement aimed at boosting energy, was the first thing she said helped her move around more regularly. She’s been taking high-dose B vitamins, CoQ10, and NADH, which she said have helped boost her energy. She’s been taking Dexedrine for the brain fog — a stimulant approved by the Food and Drug Administration to treat ADHD and narcolepsy, which works by increasing the release of neurotransmitters involved in memory, attention and mood.

She said meditation and breathwork have also helped calm her autonomic nervous system. Gradually, Dornan-Fish has felt some of her strength return.

“I’m ready for a game changer,” she said. “It doesn’t have to be a silver bullet, but I would definitely like something that makes a more significant difference in my ability to function.”