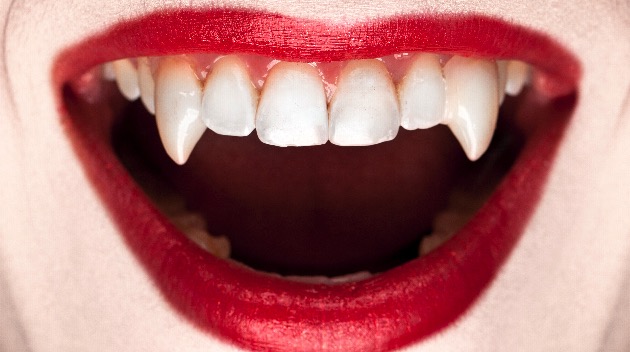 (NEW YORK) — Just when you didn’t think things could get any creepier this season, a DIY vampire fang Halloween hack gone wrong has made its way to TikTok.

Popular TikTok personality Whitney Kait, known as @muawk, shared a video of herself trying to remove fake fangs where she appears to breathe hysterically and panic after realizing they aren’t budging.

Since posting, Kait’s video has received more than 10 million views and more than 6,000 comments from other TikTokkers who were just as freaked out by her experience.

“The panicking, I felt that!” one person said, with another chiming in, “please tell me you got them off” along with a surprised face emoji.

Her viral vampire fang fiasco might be even more dangerous than it first appears. She later posted a video update where she’s seen brushing her teeth with the fangs still stuck in place. She also admitted in her caption, “Okay I need actual help!!!! I used nail glue (yes I’m dumb) but how do I get them off!!!!!!!”

A few people directly entertained Kait’s plea for help responded with “try eating an apple and see if they fall off.” Someone else suggested for her to embrace her new look, saying, “just accept that you are now a vampire for life.”

There was a response video posted by Illinois-based dentist Dr. Julie Davis, who advised Kait to call a dentist for safe removal. “Be really careful until they fall off or a dentist removes them,” she captioned the video, along with a look of concern. She also offered to help Kait if she is in Chicago.

Another Michigan-based dentist, Dr. Zainab Mackie, also known as “Your TikTok Dentist,” posted a video informing everyone not to use nail glue. “It’s poisonous and won’t come off,” she says.

As an alternative, Mackie suggests if you are using acrylic nails as your fangs to try using denture glue as it is safe and easy to take off. She also said orthodontic wax is an alternative that won’t stay on but is great for pictures.