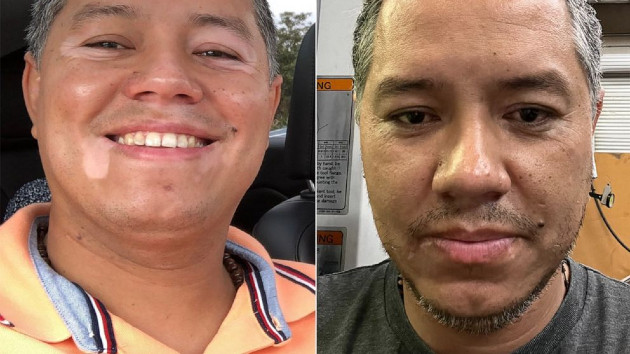 (NEW YORK) — The U.S. Food and Drug Administration granted approval on Monday for Opzelura, which is the first topical JAK inhibitor cream for the treatment of vitiligo for people 12 and older.

Vitiligo, which research estimates that 1.9-2.8 million adults in the U.S. have, is an autoimmune disorder caused by antibodies that attack a person’s pigment-producing cells. This causes patches of skin to lose color and become almost chalk white.

“With the approval of Opzelura in nonsegmental vitiligo, Incyte has once again delivered a treatment to patients with high unmet medical need who previously had no approved therapies,” Hervé Hoppenot, Incyte’s chief executive officer, said in a press release. “We are proud of Incyte’s scientists and development teams that have made this milestone possible, and we’re pleased that eligible vitiligo patients now have a choice to address repigmentation.”

The discoloration doesn’t usually cause a medical risk but can result in physical complications, such as eye issues, hearing problems and severe sunburn. It also can be challenging to deal with people’s reactions.

“Growing up with vitiligo has been pretty hard. Going around people seeing you with white patches. It’s very stressful that people judge you from your skin,” Berardo Rivas, a 41-year-old who’s been living with vitiligo for over 30 years, told ABC News. “It was traumatizing growing up.”

Rivas said he had minimal success with other treatments prior to joining the clinical trial for Opzelura, but he told ABC News he first started to see positive results after four months and more noticeable results in 1 year.

“My wife looked at me. She stared at me and she’s said, you know, you have pigment back on your eyes and I was like, I didn’t believe her. So I ran straight to the mirror. And I saw it … I was just jumping with joy. It’s like, oh, it’s working. You know, thank God,” he said.

Vitiligo can’t be cured and it’s difficult to control. Oral and topical steroids are a common treatment for vitiligo before this FDA approval, but most are not a long term solution, experts told ABC News.

“Since long-term use of steroids has a lot of side effects, dermatologists are always looking for steroid-sparing agents.” Dr. Mansha Sethi, a board-certified dermatologist in Houston, who was not involved in the clinical trial, told ABC News.

Doctors may also try phototherapy, which stimulates cells to make skin pigment, but this option is not always easy to implement as it can be expensive and involves going into an office equipped with phototherapy devices multiple times a week, every week.

“Emerging topical JAK-inhibitors, like Ruxolitinib (Opzelura), are a promising option,” Sethi said. “I personally have used JAK inhibitors off-label for several patients with vitiligo. Since it’s off-label, patients have to spend hundreds of dollars out of pocket to buy them from compounding pharmacies.”

But now, with FDA approval, insurance companies are expected to begin covering this prescription drug.

It’s difficult to predict how much the medication will cost depending on the plan you have, but as is common with pharmaceuticals, Dr. Stein says that Incyte plans to “provide copay cards that will limit the out-of-pocket cost to patients to hopefully as little as $10 or less.” And the company has a program that some may qualify to get Opzelura for free called IncyteCARES.

Dr. David Rosmarin, director of the Clinical Trials Unit at Tufts, and the principal investigator for the Opzelura vitiligo clinical trials, told ABC News he started searching for better treatments in 2013.

“We realized that the immune system is too active destroying the pigment cells,” he said.

He wondered if, Opzelura, which was already FDA approved for the treatment of mild to moderate eczema, would be able to stop the immune system from attacking the pigment.

It works as a JAK1/JAK2 inhibitor that targets specific immune system pathways specific to vitiligo.

Opzelura was tested in two Phase 3 clinical trials, which enrolled over 600 men and women ages 12 and older.

Results of the trial showed “Adolescent and adult patients with vitiligo achieved substantial facial and total body re-pigmentation within 24 to 52 weeks of therapy.”

Half of all participants had 75% improvement of their facial vitiligo after one year using the study’s measurement of repigmentation.

Rosmarin said the side effects were well tolerated.

“Six percent of patients will get some acne, which is usually mild. And about 6% can have an application site reaction, which could be some redness,” Rosmarin said. “It has a very favorable safety profile, topical easy to use, and has proven to work very consistently.”

The medication requires a prescription and is applied as a cream to clean skin on areas affected by vitiligo twice a day.