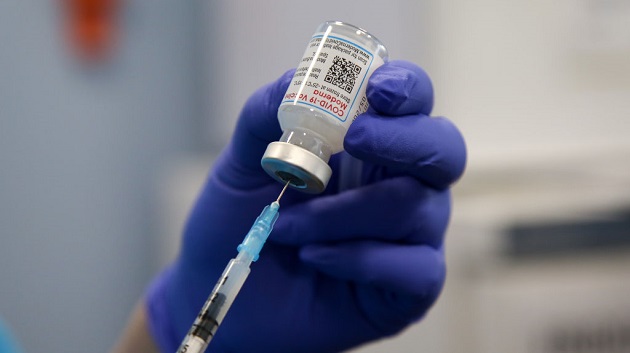 (WASHINGTON) — The head of the Food and Drug Administration on Thursday said the agency would move along to review Moderna’s data for its kid vaccine regardless of when Pfizer submits its data on kids under five, a move that will be welcome news to some parents who were upset that waiting to authorize the vaccines together would delay the timeline.

The FDA was considering reviewing the Moderna data for kids under six, which was submitted for an emergency use authorization on Thursday, alongside Pfizer’s data, which is expected to be submitted in the next few weeks, so that the vaccines could be compared side-by-side.

But on Thursday, FDA Commissioner Robert Califf told reporters the FDA would not “hold up” the Moderna application to wait for Pfizer.

“Most of the experts that I’ve talked with would say it would be ideal if they could be considered together. But if they don’t come in at the same time, then there’s not going to be a hold up on the Moderna application, just to make it come in at the same time,” Califf told reporters Thursday after a hearing on Capitol Hill, in comments that were later confirmed by an FDA spokesperson to ABC News.

A senior administration official also confirmed to ABC News the FDA would act “as expeditiously as possible” to authorize the Moderna vaccine, so long as it meets its standards.

The official said there would be no delay and the application would be judged “on its merits.”

Moderna, which is a two-shot vaccine, is different from Pfizer’s vaccine, which is a three-shot vaccine. Pfizer hasn’t finished gathering its data yet, but some expect it to be more effective because booster shots, or third shots, have shown to boost immune response in adults.

In the meantime, Moderna’s vaccine data is ready for review, though the company will continue to submit more data for its applications over the week or so.

At the same time, experts have questioned the low efficacy numbers against infection. During the omicron surge, two doses of the vaccine were roughly 51% effective against COVID-19 infection, including asymptomatic and mild infections, for children 6 months to 2 years old, and 37% effective among kids 2 years to 6 years old.

But Moderna’s Chief Medical Officer, Dr. Paul Burton, defended the vaccine’s efficacy against infection, arguing that omicron led to more breakthrough infections, but that the shot produced an antibody response that was even stronger in the young kids than it was in the 18-24-year-olds.

“I think moms and dads and caregivers, doctors and nurses should be reassured by this result,” Burton told ABC News.

“The antibody levels that we saw here were high, and we can translate that to what we see in adults where we get really good protection against severe disease and hospitalization,” he said.

Moderna is also studying third shots across all age groups, including for a variant-specific vaccine that could more effectively target some of the newer strains of the virus.

It’s not clear if the FDA’s decision to move ahead separately on Moderna will significantly affect the timeline for kids under five getting vaccinated.

While Moderna hopes its vaccine will be authorized within a month, which is the usual timeline for vaccine authorization during the pandemic, the company still has to submit more data to the FDA in the coming weeks to complete its submission.

The FDA has signaled that the Moderna submission will take some time to sift through because it has to also review the company’s data on its vaccines for kids up to age 17, which haven’t been authorized yet.

Burton said that the FDA should have the bulk of what it needs to do the review, though.

The FDA is expected to put out more information tomorrow on the timing of its meeting of FDA independent advisors, who will publicly review and discuss the data to kick off the process.

Pfizer’s CEO Anthony Bourla has said that he expected the company to submit data to the FDA in the “coming weeks,” and that it could be authorized in June.