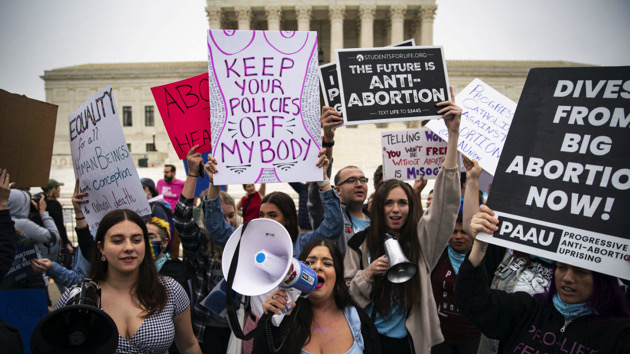 (NEW YORK) — An unprecedented leak of a draft Supreme Court opinion on abortion is putting a new spotlight on what could happen if the court overturns Roe v. Wade, the landmark case that made abortion a federally protected right in the United States.

The document, obtained by Politico, shows the Supreme Court’s conservative majority of justices are ready to overturn nearly 50 years of established abortion rights precedent via the Mississippi, Dobbs v. Jackson Women’s Health, a case the court heard last year and is expected to rule publicly on by the end of June.

“Roe was egregiously wrong from the start,” writes Justice Samuel Alito, the opinion’s apparent author, in a copy of the draft posted online Tuesday night.

Chief Justice John Roberts called the leaked draft a “singular and egregious breach” of trust in a statement issued Wednesday.

Here are five things to know about the leaked draft, the Mississippi case and what is expected to happen to abortion access in the U.S. if Roe is overturned.

1. The Mississippi case centers on a 15-week abortion ban.

In the case, the state of Mississippi is arguing to uphold a law that would ban most abortions after 15 weeks of pregnancy, while Jackson Women’s Health, Mississippi’s lone abortion clinic, argues the Supreme Court’s protection of a woman’s right to choose the procedure is clear, well-established and should be respected.

Since the Roe v. Wade ruling and the 1992 Planned Parenthood v. Casey ruling that affirmed the decision, the court has never allowed states to prohibit the termination of pregnancies prior to fetal viability outside the womb, roughly 24 weeks, according to medical experts.

Mississippi, through its state health officer, Dr. Thomas E. Dobbs, an infectious disease physician, argues Roe and Casey were wrongly decided and that each state should be allowed to set its policy.

2. How the draft ruling became public remains a mystery.

The leak of the draft ruling on a high-stakes issue like abortion is being described as an extraordinary breach of protocol and tradition for the Supreme Court, whose nine justices and their clerks are known for being extremely discreet.

The document, which Politico said it obtained from a “person familiar with the court’s proceedings,” is marked “first draft” and dated Feb. 10, 2022 — two months after oral arguments were heard in the case Dobbs v. Jackson Women’s Health Organization.

“The Constitution does not prohibit the citizens of each State from regulating or prohibiting abortion,” the draft states. “Roe and Casey arrogated that authority. We now overrule those decisions and return that authority to the people and their elected representatives.”

Following the publication of the draft, Chief Justice Roberts announced he has directed the Marshal of the Court — its chief operations and security officer — to investigate the leak.

“To the extent this betrayal of the confidences of the Court was intended to undermine the integrity of our operations, it will not succeed. The work of the Court will not be affected in any way,” Roberts said in a statement. “We at the Court are blessed to have a workforce — permanent employees and law clerks alike — intensely loyal to the institution and dedicated to the rule of law.”

“Court employees have an exemplary and important tradition of respecting the confidentiality of the judicial process and upholding the trust of the Court. This was a singular and egregious breach of that trust that is an affront to the Court and the community of public servants who work here,” he said. “I have directed the Marshal of the Court to launch an investigation into the source of the leak.”

3. The draft ruling is not a final Supreme Court decision.

The drafting of Supreme Court opinions is a fluid and dynamic process, sources familiar with the internal operations have told ABC News.

The leaked document is part of that fluid process and is not the court’s final ruling.

Though the document is from February, an unnamed source familiar with the deliberations told Politico that Justices Alito, Clarence Thomas, Neil Gorsuch, Brett Kavanaugh and Amy Coney Barrett all initially supported a ruling siding with Mississippi and “that line-up remains unchanged as of this week.”

A Wall Street Journal editorial this month suggested that Chief Justice John Roberts, known for his passion for established precedent and the court’s reputation, may try to convince one of his conservative colleagues to join him in a narrower opinion that would not completely overturn Roe v. Wade.

4. Overturning Roe v. Wade would give power to the states.

If the Supreme Court rules to overturn Roe v. Wade, the power to decide abortion access would rest with the elected leaders of each state.

As of today, more than half of the nation’s 50 states are prepared to ban abortion if Roe is overturned, according to the Guttmacher Institute, a reproductive rights organization.

Twenty-one states already have laws on the books that would immediately ban abortion if Roe were overturned. Five additional states are likely to ban abortion should Roe be overturned, the Guttmacher report said.

Because the states that plan to ban abortion are focused in specific geographic regions, including the South, the expected effect is that women will have to travel much longer distances, at a greater cost and inconvenience, to seek abortion care, according to Elizabeth Nash, interim associate director of state issues at the Guttmacher Institute.

On the other side, states that support abortion rights, like California, Connecticut and New York, are also ones to watch if Roe is overturned because they could fortify laws that enhance and protect abortion access in their states, experts say.

5. Abortion remains legal in all 50 states as of now.

Abortion rights advocates are messaging to people that abortion is currently legal in all 50 states.

Though many states over the past several decades have passed laws that limit abortion access — as seen most recently in Oklahoma, Florida and Texas — Roe v. Wade, which made access to abortion a constitutional right, currently remains the law of the land.