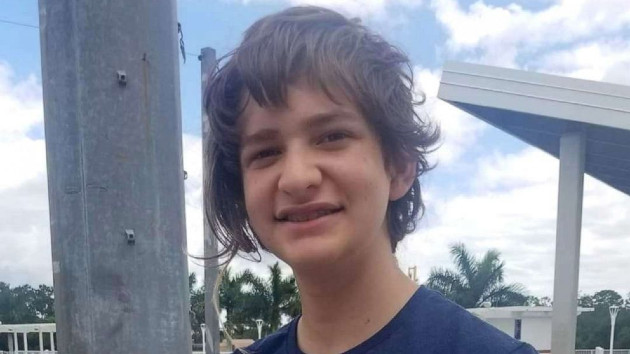 (NEW YORK) — A Florida teen has been battling an infection suspected to be caused by a rare, brain-eating amoeba for over 50 days, as his family prays for him to wake up, they said.

Caleb Ziegelbauer, 13, was suffering from a severe headache, high fever and hallucinations when his family brought him to Golisano Children’s Hospital of Southwest Florida in Fort Myers on July 9, according to Lee Health, the hospital’s parent company.

After quickly ruling out bacterial meningitis, doctors began treating the teen for primary amebic meningoencephalitis, a disease with similar symptoms that’s caused by Naegleria fowleri, an amoeba that destroys brain tissue. Caleb swam in brackish water days before experiencing his symptoms, further causing doctors to suspect he was infected by the amoeba, the hospital said.

Samples sent to the Centers for Disease Control and Prevention ultimately tested negative for Naegleria fowleri, though Caleb’s doctors continued treating the teen for primary amebic meningoencephalitis due to his symptoms and history, the hospital said.

Caleb was on a ventilator and has suffered seizures while in the pediatric intensive care unit, though his condition has been stable in recent weeks, his family said. After more than 50 days at the children’s hospital, Caleb was transferred this week to a rehabilitation hospital in Chicago for the next phase of his treatment.

His mother, Jesse Ziegelbauer, said they sought out Shirley Ryan AbilityLab because Caleb needs a disorders of consciousness program.

“He is made of pure grit and determination, and it is exactly that which we are banking on to wake him up,” Jesse Ziegelbauer said during a press briefing Wednesday before they left on an air ambulance. “I can’t wait for him to share his story. It is his and only his to share.”

His mother described Caleb, the eldest of four siblings, as an “amazing big brother” who loves baseball and science and wants to be an epidemiologist when he grows up.

“Caleb is brave. Caleb is strong. Caleb is a fighter. Caleb is young. Caleb is healthy. Caleb has a brain capable of healing,” she said.

As he continues to fight, his family say they remain hopeful.

“Every finger twitch we see makes us excited for what’s to come,” Jesse Ziegelbauer said.

Infections with Naegleria fowleri are rare but often fatal. Out of 154 known cases of primary amebic meningoencephalitis reported in the U.S. from 1962 to 2021, only four people have survived, according to the CDC.

This summer, a Missouri resident with a confirmed Naegleria fowleri case died, while a child in Nebraska died from a suspected case, health officials in their respective states said.

Infections mainly occur during the summer months in recreational water, according to the CDC. People can become infected by Naegleria fowleri when water containing the amoeba enters the body through their nose.

People can try to reduce their risk of becoming infected by Naegleria fowleri by limiting the amount of water that goes up their nose while in bodies of warm freshwater and by avoiding recreation in warm freshwater during periods of high water temperature.

Caleb started complaining of a headache days after playing in the water at a local beach in Port Charlotte on July 1, his family said. Though his tests were inconclusive for the disease caused by Naegleria fowleri, his doctors at Golisano Children’s Hospital believe that to be the cause of his illness, the hospital said. It is also common for Naegleria fowleri not to be initially detected in patients with primary amebic meningoencephalitis, according to the CDC.

Caleb’s family has been speaking out since they first learned of his likely diagnosis in hopes of alerting people on how to protect themselves.

Tampa-based Jet ICU was among those who heard about Caleb and offered to fly him and his family to Chicago at no cost.

“We heard about the story. We had to step in,” Jet ICU flight paramedic Jared Wayt told reporters Wednesday. “He’s already beat the odds. So hopefully we can help further his care and his recovery.”