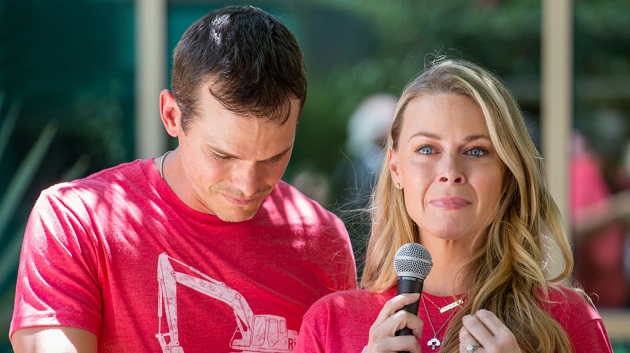 In 2019, the Smith family were outside their home when River, who was 3 at the time, slipped through their home pool gate and went into the water. Even though he was pulled out of the pool shortly afterward, River had been deprived of oxygen for too long and later died.

Smith said in the years since, grief has been a “messy” yet “hopeful” journey for both her and her family.

“It’s looked like anger and severe sadness and frustration and confusion but it’s also looked like growing through it and seeing joy in my other children and seeing them thrive in school and bringing awareness to drowning prevention,” the mom of four told co-hosts Hayley Hubbard and Jessica Diamond on the Meaning Full Living podcast.

Even though their shared and individual grieving processes have been complicated and difficult experiences, Smith said she hasn’t shied away from speaking up about it and wants others who’ve lost children to know that they’re not alone and that grief doesn’t have to look any specific way.

“So many times, it was not pretty … sobbing tears, screaming in my car, punching my steering wheel, sitting by his bed, holding his blanket, crying until nothing else came out. That’s where I was and that’s what’s real and I think people don’t talk about that,” said Smith, who has continued to share snippets of her family life on social media since River’s death.

“I was just trying to show the realness of pain and grief and it’s not easy and it’s OK to feel those emotions … but you just can’t stay there, you can’t stay stuck in that place,” she added.

It’s a message Smith has been conscious about teaching her older children as well. Lincoln, now 8, and London, 10, both witnessed their younger brother’s accident.

“We had to be very honest from the very beginning,” Smith said. “The nurses said you have to be very honest. Kids are resilient and they’re going to know if you’re sugarcoating things so we just went home with that intention of being very honest … We said, ‘River was without oxygen for too long. They did everything that they could but Bubbie died.'”

Smith said she and her husband decided to put their children in play therapy to help them cope with their grief but they also made an effort to keep River’s memory alive, talking about him together as a family, keeping pictures of him displayed at home and not hiding their own grieving from their children.

“We just let them process their emotions and we have continually told them that whatever they’re feeling … it’s OK,” she said.

After River’s death, the Smith family welcomed another child, a son named Maverick. Smith said she knew early on that she wanted to make sure Maverick got formal water safety lessons.

One way Smith has been able to turn her family’s tragedy into meaningful purpose is to advocate for water safety, and she’s been spreading the word through her social media platforms.

Smith shared multiple safe swimming tips on Instagram, many of which echo the advice of water safety organizations like the ZAC Foundation, which was founded in 2008 by Karen and Brian Cohn, whose son Zachary also died in a drowning accident in 2007.

Below are some water safety tips parents should know, from the ZAC Foundation:

Keep your eyes on your kids. If your child doesn’t know how to swim, be sure they’re at arm’s length any time they are in or around water.
Enroll children in swimming lessons.
Ensure there is four-sided fencing around backyard pools with self-closing, self-latching gates.
Be sure there are alarms on doors and windows leading out to the pool area.
Become your kids’ first line of defense and learn how to perform CPR.
Remove pool toys when not in use as children can be attracted to them.
Empty the water from inflatable pools and buckets when not in use.
Wear and have your children wear Coast Guard-approved life jackets in the water.
If kids are wearing life jackets and or “puddle jumpers” in the water, talk to them first about what it feels like to be in the water without a life jacket on.
Talk to children to make sure they don’t play in water areas without adult supervision. Make sure kids never go into the water without permission. Only swim where there are lifeguards supervising.
Check flag warnings for water conditions and avoid getting into the water if conditions are unsafe.
Create a water safety plan for you and your family, just like you would for a fire safety plan.
Keep a phone nearby in case someone needs to call 911.