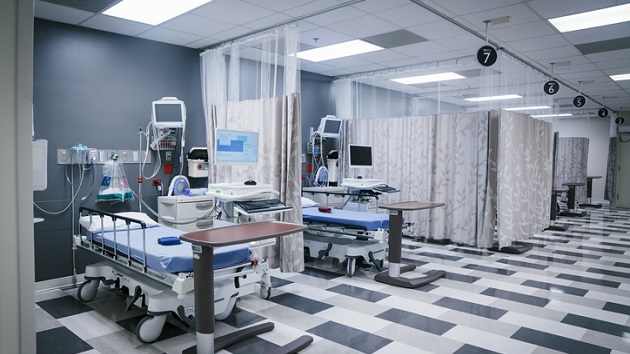 (NEW YORK) — Following weeks of increasing infection rates, a growing number of Americans are heading into the hospital in need of care.

On average, nearly 2,400 virus-positive Americans are being admitted to the hospital each day, up by 17% in the last week, according to federal data. Forty-one states and territories have reported increases of 10% or more in their daily number of COVID-19-related hospital admissions.

The U.S. is reporting more than 68,000 new cases every day, up by 20% in the last week, and 52% in the last two weeks. The nation’s daily case average has more than doubled in the last month.

Over the last week, nearly every state in the county — 45 states and territories — have seen increases of 10% or more in their daily COVID-19 infection rates.

Last week, counties across the Northeast moved into the “high” risk category for COVID-19 risk, after weeks of increasing cases and hospitalizations.

The “high” community-level transmission suggests there is a “high potential for health care system strain” and a “high level of severe disease.” Thus, the Centers for Disease Control and Prevention recommends people wear a mask in public indoor settings, including schools.

As infection rates continue to increase across the country, some health experts are questioning how much higher totals are than initially reported.

“We’re probably missing a lot,” David Dowdy, an epidemiologist at the Johns Hopkins Bloomberg School of Public Health, told ABC News last week. “I would not be surprised to find out that our confirmed case count is under-counting the total number of cases by a factor of two or three. I think it’s quite possible that we’re having right now, as many cases as we were during the, you know, the delta wave of August or September, certainly not what we had this past winter, but we probably are having a lot more cases than what’s currently being reported.”

“We see that the number of hospitalizations being reported has again increased by about 20 to 30% from the low back in April. So while we may not have a perfect read on those numbers, they are more reliable than the case counts,” Dowdy said.

Despite increases in other metrics, the average of daily COVID-19-related deaths remains at a persistent plateau. The average currently stands at 340 fatalities a day. That is still much lower than during the omicron peak in early February, when the U.S. was reporting more than 2,600 deaths every day.

The U.S. is also now less than 2,500 deaths away from hitting 1 million COVID-19 related deaths, putting the nation on track to reach the milestone in the next week.