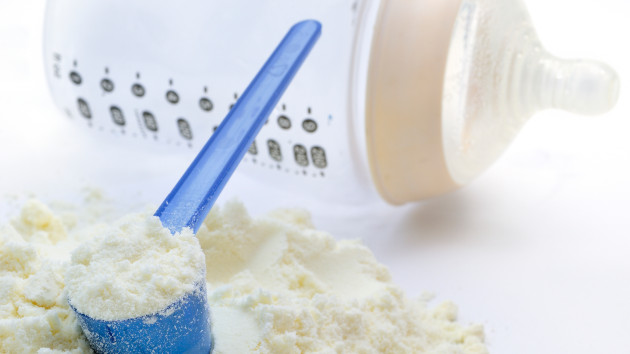 (WASHINGTON) — An internal review of the Food and Drug Administration’s actions leading up to the infant formula crisis finds a combination of human error, antiquated technology, and poor communication and accountability amongst an already threadbare food workforce all contributed to a perfect storm of problems which exacerbated the supply shortage.

The issue was only worsened by the FDA’s lack of a robust mandate to strong-arm industry players’ compliance, the review found.

During more than 40 interviews with over 60 FDA staff and leadership “directly involved with the events that transpired” the review found “inadequate processes and lack of clarity” may have delayed the agency’s response to contamination concerns at at infant formula maker Abbott’s facility in Sturgis, Michigan; and that at several junctures, critical information slipped through the cracks of agency awareness.

In a statement, FDA Chief Robert Califf said the agency didn’t have the power to force the industry’s hand.

“The situation at the Abbott Sturgis facility has highlighted just how little authority the FDA has to compel many companies to ‘do the right thing’ without intervention,” Califf said.

The internal review echoed that sentiment: “a confluence of systemic vulnerabilities” here demonstrated the need for more investment in modern tools and tech to prepare for future public health challenges.

FDA’s limited mandate and resources prevent them from managing “supply chain issues and shortages of critical food products,” the review said, especially when it comes to a supply chain like that of baby formula, which had already been strained by the Covid pandemic — and which Abbott’s recall and pause in production further stressed.

The review also noted that the contaminant and illness at the heart of Abbott’s massive shutdown, Cronobacter sakazakii, is “poorly understood” and lacks thorough federal oversight — and that those “scientific gaps” in understanding Cronobacter “hindered the FDA’s response throughout the incident.”

The discovery of Cronobacter inside Abbott’s Sturgis plant prompted a massive voluntary formula recall in February, after four babies who had consumed Abbott’s formula contracted a Cronobacter infection. Two of the infants subsequently died, although Abbott maintains there has not been conclusive evidence that its formula caused the infant illnesses, since none of the Cronobacter strains found at their plant matched the two samples genetically sequenced from the sickened infants.

Ultimately, it was the combined findings of Cronobacter inside Abbott’s plant — along with a pattern of serious operational deficiencies and consumer complaints — which led to its closure.

In a statement to ABC News regarding the internal review, an Abbott spokesperson said, in part, they “will continue raising the bar” on their formula’s regulatory requirements “by working with FDA and industry partners to further advance infant formula safety and processes.”

Abbott’s shutdown ricocheted across the country, exacerbating the supply shortage and forcing families to scramble for alternatives in the hyper-concentrated formula market.

FDA’s Califf has previously noted some of the points outlined in the report released Tuesday: that the response was “too slow,” with “decisions that were suboptimal along the way,” while warning that FDA’s workforce is “very tired, overworked,” and the agency’s food safety arm is underfunded.

Califf has also previously underscored FDA’s lack of authority to “compel companies to give us information,” and has pointed the finger instead at Abbott’s failure to be upfront about the issues at their plant.

Critics of FDA’s response have previously pointed out that there was a brewing problem in the formula market before Abbott’s shutdown — and that the administration had plenty of warning signs both about the pandemic supply chain issues and about Abbott’s quality control problems long before things reached a boiling point this spring.

But this report contains several new details about repeated fumbles in the response, including crucial delivery system errors and a need for better staff communication at the FDA.

The review says FDA found that some samples taken from Abbott’s Sturgis plant after their contamination concerns came to light “were delayed in transit by third party delivery companies.”

The review comes after FDA leadership revealed this spring that a whistleblower complaint from a former Abbott employee detailing a “litany of violations” at the Sturgis plant had remained in limbo for months. That complaint had been sent to the FDA last October, but was not delivered, seen or escalated until four months later — because of, what the FDA has said, was “an isolated failure in FDA’s mailroom, likely due to COVID-19 staffing issues.”

The new internal review now says that such gaps in coordination between systems (though here, punting accountability to a “third party,”) “makes it difficult for the agency to connect related submissions and rapidly identify emerging safety and quality issues.”

“The FDA should evaluate procedures for shipping and testing samples sent to regulatory laboratories and consider whether changes should be made to analytical capability and capacity, and ways to enable immediate notification and escalation of analytical results for significant public health threats,” the review says.

The review adds that the agency is “collecting an inventory of every entry point for consumers, whistleblowers, other government agencies, clinicians, and other members of the public to facilitate notification to the FDA of their concerns about product safety and quality,” which will help “streamline” safety concerns to “rapidly assess emerging safety signals.”

The internal review ultimately identified five major findings for FDA to improve upon, including the need for more modern data technology which “allows for the access and exchange of data in real time to all the people involved in response.”

“The lack of coordination between systems makes it difficult for the agency to connect related submissions and rapidly identify emerging safety and quality issues,” the report says, and “inadequate processes and lack of clarity related to whistleblower complaints may have delayed the FDA’s response to those complaints.”

The review also underscores the need for FDA to optimize its emergency response capabilities to handle multiple concurrent public emergencies. FDA “lacks procedures for facilitating this complex coordination of staff on response activities that expand beyond the established foodborne outbreak response policies and procedures,” the review found.

The review also blames Covid infections at the manufacturing facility which “delayed the FDA’s in-person response to complaints raised” regarding Abbott’s Sturgis plant, and underscores the need to strengthen FDA’s food workforce including more training, staffing, equipment, funding and regulatory authorities “to fulfill the FDA’s mission.”

It also emphasizes the importance of closing knowledge and oversight gaps on Cronobacter and translating that knowledge into “appropriate control measures.”

Those gaps in understanding “hindered the FDA’s response throughout the incident,” the review said.

It also noted, FDA oversight should focus on accountability within the infant formula industry, which employs “dated technology and record keeping practices that can cause delays in collecting critical information needed to perform and define the scope of recalls.”

Moreover, the FDA lacks robust enforcement teeth to make sure companies are adhering to best practices of strong food safety culture, the review said; manufacturers aren’t required to make Cronobacter isolates available to the FDA for sequencing and uploading into the national database, which “limits the data available to help identify clusters of illness and potential sources of contamination.” Without further authority “it will be difficult for the FDA to identify early signals of potential safety issues and work with manufacturers to mitigate these hazards.”

FDA’s Califf had asked for this review to be done; the agency will “form working groups charged with implementing the recommendations,” and a year from now, FDA’s progress on the above recommendations will be assessed, the review said.

Meanwhile, the U.S. Department of Health and Human Services’ Office of Inspector General has also launched its own audit into how the FDA responded leading up to the recall and closure of Abbott’s Sturgis plant — and whether they followed proper recall protocol once deadly bacteria had been detected inside the plant. Findings from OIG’s audit are expected sometime in FY 2023.

The FDA says they are working with the OIG and “looks forward” to their “findings and recommendations.”