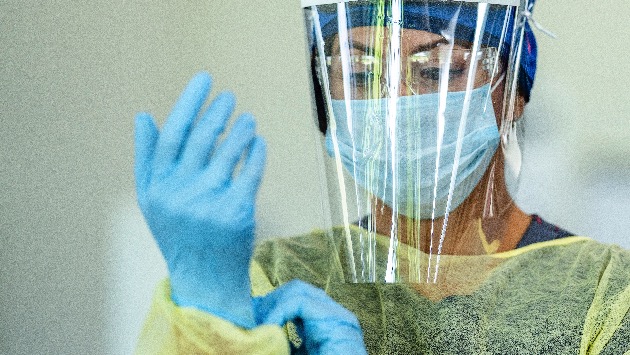 (NEW YORK) — The country’s largest nurses’ union praised the federal government on Wednesday after officials said three states tasked with implementing their own safety measures for health care workers would lose that right unless they adhered to agreed-upon guidelines.

The U.S. Occupational Safety and Health Administration had announced Tuesday it was considering stripping Arizona, Utah and South Carolina of their abilities to oversee workplace safety enforcement because they’re not in compliance with an emergency standard order passed over the summer that guarantees certain protections.

OSHA had allowed 22 states to oversee work conditions for health care workers — measures including the wearing of personal protective equipment, or PPE, enforcing social distancing, providing paid sick leave — so long as local workplaces adopted requirements at least as strong as those agreed to at the federal level.

Deborah Burger, president of National Nurses United, which represents over 175,000 nurses, said in a statement on Wednesday that health care workers from coast to coast have been pushing for better protections as they put themselves at risk working on the front lines of the coronavirus pandemic.

“We urge federal OSHA to act expeditiously to put in place the necessary elements for federal OSHA to resume enforcement in Arizona, Utah, South Carolina and any other states which fail to enforce the [emergency standard] to ensure protections for health care workers,” Burger said in a statement. “We will never emerge from this pandemic if we don’t make sure nurses and health care workers are safe at work.”

The Republican governors of Arizona, Utah and South Carolina defended their states’ action and accused OSHA of overreach.

Arizona Gov. Doug Ducey contended that the Industrial Commission of Arizona’s OSHA, or ICA, the state’s workplace overseer, intends to comply with the emergency standards but is seeking public input on the mandate. Ducey accused the federal government of not justifying its threat to revoke oversight powers.

“The federal government’s threat to strip the ICA of its OSHA authority is nothing short of a political stunt and desperate power grab,” Ducey said in a statement.

Utah Gov. Spencer J. Cox said in a statement that he had concerns over the emergency standard, saying it “would place an unfair burden on the health care industry” and his state didn’t “have regulatory authority to require employers to pay their employees sick leave.”

“We reject the assertion that Utah’s State Plan is less effective than the federal plan,” Cox said.

South Carolina Gov. Henry McMaster said his office is preparing for “a vigorous and lengthy legal fight” and that OSHA’s announcement Tuesday was “clearly a preemptive strike by the federal government.”

Burger stressed that all three states needed to prioritize the safety of health care workers and come together to make sure they’re protected as hospitalizations keep increasing.

“Arizona, South Carolina, and Utah had the duty — legally and morally — to come into compliance and protect workers,” Burger said. “They did not, and we could not be more proud that OSHA is standing up to hold them accountable today.”