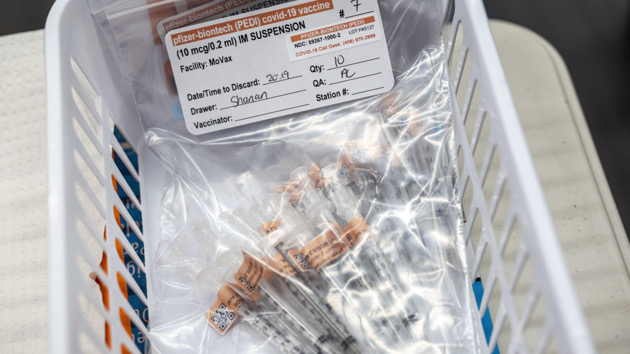 (NEW YORK) — While top U.S. health officials are urging some Americans to get yet another coronavirus booster shot, local health departments across the country are grappling with a growing dilemma — how to address a declining demand for vaccines, while minimizing the waste of unused millions of doses currently in state stockpiles and at risk of expiring.

Since the emergency use authorization of the first COVID-19 vaccines in the U.S. last winter, federal data shows that states received a staggering 720 million doses, and more than 570 million of those shots have been administered.

However, an ABC News analysis of state-provided data found that millions of those shots have not ended up in arms, largely due to a significant decline in the number of individuals willing to get vaccinated — with many vaccine doses now left unused in refrigerators or discarded in trash cans across the country.

ABC News contacted officials from health departments in all 50 states, and in analyzing state provided data, found that tens of millions of COVID-19 vaccine doses have either gone to waste, remain unused, or will expire in the coming weeks and months.

“It is a tremendous loss of opportunity for these vaccines to not make it into the shoulders of those who need them,” C. Buddy Creech, director of the Vanderbilt Vaccine Research Program and associate professor of pediatric infectious diseases, told ABC News. “Not only is it a financial loss for the purchaser of vaccines — the U.S. government — but also a significant health loss for those who are not yet protected from COVID and its complications.”

Although the total number of vaccines at risk of being wasted is not publicly accessible in every state, available data provides insight into some states’ efforts to ensure the shots do not go unused.

“We have worked with local public health to fill orders for vaccine from providers with existing inventory versus ordering new doses, and to redistribute vaccine with soon to expire dates to use up inventory within the state before we order more with longer expiration dates,” Lynn Sutfin, spokesperson for the Michigan Department of Health told ABC News. “Our field reps are moving vaccines across the state to help redistribute as needed to avoid wastage.”

Vaccine dose wastage can result from a variety of issues, including dropped vials and syringes; and improperly prepared, unused, or expiring vaccine doses, various officials reported.

“Most of the wasted or unused doses are reported because a provider punctures a multidose vial in order to give someone a vaccine but does not necessarily have enough people to give the remaining doses before the vial expires,” a representative for the State Joint Information Center in Colorado, where more than 619,000 doses have been unused, told ABC News. “This is aligned with CDC’s best practices that advise providers to not miss any opportunity to vaccinate every eligible person.”

In large states like California, where more than 70% of residents are fully vaccinated, nearly 3.6 million shots are sitting in the state’s stockpile, according to state data.

Similarly, in North Carolina, where 60% of residents have completed their primary vaccination series, 856,000 shots are currently available under state inventory, while 1.7 million shots have been wasted after the doses expired or were improperly opened.

Nearly 760,000 vaccine doses have been designated as non-viable, spoiled, or expired, officials in Oregon reported, but officials told ABC News that such totals are “not unexpected.”

“As demand for vaccines wanes, we expect there to be a similar drop in the number of doses vaccine providers request and, as a result, a decrease in the number of unused doses. Oregon will be left with excess inventory, but we believe that we have done everything we can to minimize waste,” a representative for the Oregon Health Authority told ABC News.

Many states ordered hundreds of thousands of vaccine doses in bulk in order to ensure they had enough shots to meet demand, but in many cases, the need turned out to not be as high as initially expected.

Although the total number of shots wasted in states was high, many state organizers stressed that the overall percentage of wasted doses was relatively low, in comparison to the number of shots provided to residents.

Officials said they continue to work to minimize wastage by controlling the amount of vaccine that is ordered and shipped to the state, and by redistributing vaccine when possible within the state.

Last spring, millions of Americans flocked to COVID-19 vaccination clinics across the country to get their shots. In April of 2021, when every adult became eligible to get vaccinated, more than two million people were getting their first doses every day.

Overall, more than 220 million Americans have received a shot, representing about two-thirds of the U.S. population. Earlier this month, a new study from The Commonwealth Fund found that the U.S. COVID-19 vaccine program is now estimated to have prevented 2.2 million deaths, 17 million hospitalizations and 66.1 million additional infections through March 2022.

Now, a little less than a year later, with those most eager to get the shots now inoculated, vaccination rates have plummeted, federal data shows. A sizable group of more than 55 million eligible Americans remain unvaccinated against the virus.

“The pool of people that are unvaccinated is likely to remain unconvinced of the importance of vaccine-induced protection,” Dr. John Brownstein, an epidemiologist at Boston Children’s Hospital and an ABC News contributor, said, adding that convincing those still hesitant to get the shot will be a difficult feat.

In recent weeks, following the introduction of a fourth COVID-19 vaccine dose for some older and high-risk populations, there has been a slight uptick in the overall number of doses administered. However, the number of Americans initiating vaccination remains at a near record low of just over 50,000 Americans getting their first dose every day.

“Efforts including incentives, improved convenience, mandates and targeted public health messaging during a surge have all had various successes in increasing vaccination rates. It’s hard to imagine what might influence someone to change their stance especially with cases at low levels and restrictions being lifted,” Brownstein said.

Dr. Stephen Morse, an epidemiologist at Columbia University’s Mailman School of Public Health, described the waste of millions of COVID-19 doses in the U.S. as a “tragic combination of events.”

“The vaccine development was both one of the miraculous triumphs and one of the tragedies of the COVID response,” Morse told ABC News, further referencing a combination of factors to blame, including vaccine nationalism, in which wealthy countries, such as the U.S., pre-ordered large quantities of the shots, making less vaccine available for the rest of the world, and persistent issues with vaccine hesitancy.

“We naïvely underestimated the extent of vaccine hesitancy and resistance, some driven by what WHO called the ‘infodemic’ of misinformation and disinformation, which persists to this day,” Morse said.

Vaccine access and wastage a stark reminder of privilege

Some politicians and public health experts have raised concerns over the ethical implications of so many shots going to waste.

“The wastage of millions of doses is a stark reminder of the privilege we have had in accessing vaccines while the majority of the world had to wait months. Extraordinary resources and financial investment will ultimately go to waste,” Brownstein said.

Delaware Sen. Chris Coons warned last week that millions of COVID-19 vaccine doses, which were set to be shipped overseas, could expire, without proper funding from Congress.

“I was so disappointed that we, in Congress, could not come together and deliver critically needed global help to deliver the vaccines that we’ve already invented, developed and purchased, and to make sure that the nearly 3 billion people around the world who haven’t yet had a single vaccine dose get some protection against this pandemic,” Coons told CBS’ Face the Nation.

“We’ll negotiate what we have to in order to secure a chance to move forward and not waste the vital vaccines America has already purchased,” Coons added.

There may be additional ethical concerns about not donating enough shots to ensure that people can receive a full vaccination series.

“There are significant operational and potentially ethical issues around donating vaccines to other countries; is it ethical to donate the first dose when there is no guarantee of a second? What if the vaccine has not yet been approved in that country? Given how rigorously we regulate and authorize vaccines around the world, it is likely no surprise that the process of donating vaccines can become complicated very quickly,” Creech added.

Even if states wanted to donate their stockpiles to other countries in need, with so many doses left unused in the U.S., Brownstein explained that logistically, such donations would be near impossible.

“Once a vaccine ends up at a site, it is administered or thrown out. There is usually no third option of sending it to another site and even lower chance it could go to another state let alone another country,” Brownstein said. “These expired doses are a reminder of our challenged logistical platforms. While we optimized for distribution to vaccination sites, there was very little capacity to shift supply especially across jurisdictions.”

A continued concern for many health experts is vaccinating the rest of the globe, as they say the pandemic will never truly subside until vaccine-use is widespread and equitable.

“Assuming we won’t get immediate supply for most of the world, the best solution might be to retest and determine if we can legitimately extend shelf life,” Morse said, adding that he does not believe donating short-dated doses is realistic.

“We certainly should intensify efforts to provide vaccine now to those who, for some reason, haven’t yet been vaccinated and may now be willing to take it if vaccine is easily available,” Morse said. “Unfortunately, in the U.S., I fear we’ve reached diminishing returns by now. It would have been far better if everyone had gotten two doses early on, which might have slowed the virus down.”