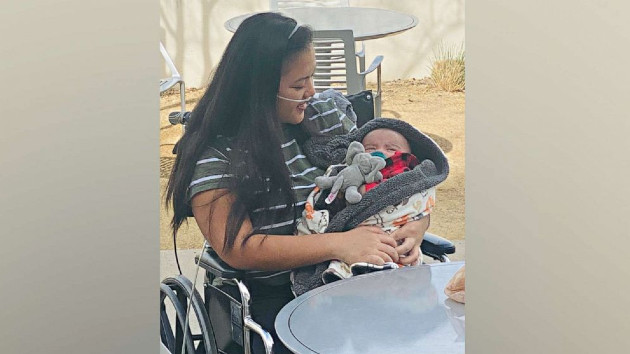 (NEW YORK) — A Nevada woman who gave birth to two children and suffered the loss of her husband during the coronavirus pandemic is recovering after a nearly four-month battle with complications from COVID-19.

Rowena Salas, of Las Vegas, was released from the hospital last week, after first being hospitalized with COVID-19 in late November, when she was seven months pregnant.

Salas said doctors told her they needed to do an emergency cesarean section to save her and her baby’s lives.

“I remember them saying they had to do an emergency C-section and I remember saying, ‘I’m not ready. The baby is not ready,’ and I was freaking out,” Salas, 32, told ABC News’ Good Morning America. “I remember waking up and it’s January.”

Shortly after, she was put on an extracorporeal membrane oxygenation, or ECMO, machine, which removes carbon dioxide from the blood and sends back blood with oxygen to the body, allowing the heart and lungs time to rest and heal, according to her doctor, Dr. Michael Gale, co-medical director of the ECMO program at Sunrise Hospital in Las Vegas.

Salas said when she contracted COVID-19 in November, it was her first time getting the virus. She had not yet received a COVID-19 vaccine because she was waiting until she gave birth to do so.

Data show that women who have COVID-19 during pregnancy have both an increased risk of more severe disease and an increased risk of pregnancy complications. Both the Centers for Disease Control and Prevention (CDC) and the American College of Obstetricians and Gynecologists (ACOG) recommend vaccination against COVID-19 for women who are trying to get pregnant, are currently pregnant, or are breastfeeding.

While Salas was sedated and on the life-saving machine, her newborn son, Oliver, spent several weeks in the neonatal intensive care unit. Once he was released, he and his older sister, Mia, 2, were cared for by family members while Salas remained hospitalized.

When she woke up from sedation in January, Salas said she quickly realized she was not pregnant anymore. She said she was confused by family photos on the wall, including ones of her husband, Jaime, who died in May 2021 due to hemorrhagic pancreatitis.

“I thought, ‘He would never leave me by myself,’ not realizing he had already passed,” Salas recalled. “I didn’t realize what happened until I saw a picture from his service and it felt like losing him all over again. It was just hard.”

She said her thoughts then turned to being a single parent of two children, and realizing she needed to work hard to get better for them.

“I told myself, ‘No one is going to parent my kids like how we want to parent, so I have to finish this. I have to see myself through,'” said Salas, who gave birth to Mia in March 2020, at the start of the pandemic. “So I kept pushing myself.”

Salas pushed herself through an arduous physical recovery that saw her exceed her medical team’s expectations, according to Gale, who described Salas as always pushing “a little bit further.”

“It’s a long, long process to recover from anything as life-threatening as the severe COVID pneumonia that she had,” said Gale, adding that Salas’ medical care consisted of a “dedicated team” of physicians, surgeons, physical therapists, respiratory therapists, nurses and more. “Rowena is a really remarkable person and drove a lot of her recovery herself.”

Even with her faster-than-expected recovery, it was not until March 3, 2022, 98 days after giving birth, that Salas was able to hold her son Oliver for the first time.

Salas said she was nervous at first that she would not have a connection with her son because of their long separation.

“Once he was put into my arms, he looks just like me. I knew, this is my baby boy,” she said. “Meeting him for the first time brought back memories of my husband and, everything. This is why I pushed myself to finish, to recover so soon, because of that moment, being with him and with Mia.”

Salas said she was also anxious that same day when she was reunited with Mia, worrying her daughter would not remember her after so months away. Instead, she said, Mia ran into her arms.

“It was a feeling that I had never felt before,” said Salas. “I don’t even know how to describe it … Seeing her and her approaching me with her arms wide open, it’s the best feeling in the world.”

Salas is now adjusting to life as a single parent of her two children, caring for them both at home with the help of family and friends.

She is currently on oxygen but doctors expect her to continue to improve to the point where she no longer needs supplemental oxygen. Salas can walk on her own and said her goal is to keep improving so she can keep up with her kids.

She also hopes to return to her job working in a dermatology office.

“I’m so grateful for everyone who was there for me,” said Salas. “I honestly would not have made it this far without the team, the respiratory therapists, the nurses, the physical therapists, everyone involved in my care I feel like motivated me to finish.”