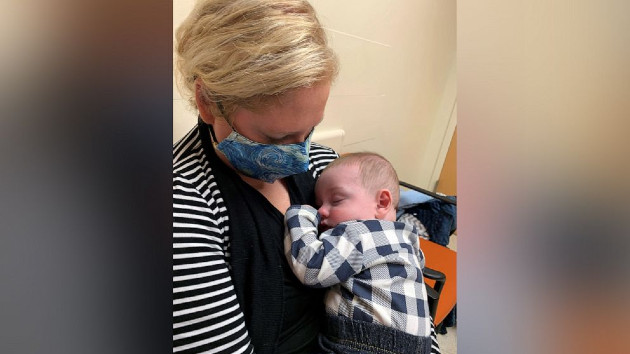 (NEW YORK) — A Missouri mom is warning fellow parents about a rare condition caused by a strand of hair that sent her 5-month-old son to the emergency room.

Sara Ward, from St. Louis, shared a Facebook post explaining that her 5-month-old son, Logan, started developing a condition called hair tourniquet syndrome on Jan. 22 and, over the course of a week, had to be rushed to his pediatrician’s office, urgent care and later, the emergency room at SSM Health Cardinal Glennon Children’s Hospital.

“This was my first time and even with being a third-time parent, I was not aware of this beforehand,” Ward, a mom of three, told ABC News’ Good Morning America.

“I had never seen this or this (had) never come up with any of my friends or family members that are moms. So I was definitely kind of in the dark on just how severe this can be,” Ward said.

For Ward, the unexpected ordeal began when she and her husband noticed that one of Logan’s toes was “looking a little bit pink.”

“We kind of didn’t really think much of it that night because he didn’t seem bothered by it at all,” she said.

They went about their weekend as usual, but Ward said that after a couple of days, Logan’s toe started changing color again.

“By Monday, it hadn’t improved and it was starting to look redder and we were kind of noticing this line that was going across the middle of the toe.”

That’s when she decided to take Logan to see his pediatrician and it was at the doctor’s office that she first learned about hair tourniquet syndrome.

“Hair tourniquet syndrome is when there is a piece of hair, or a thread of another material like a piece of cloth, that’s tightly wrapped around a body part. It’s usually a finger or a toe, but it also can be the genitals,” Dr. Sara Holmstrom, a board-certified pediatrician and a pediatric emergency medicine fellow at Lurie Children’s Hospital in Chicago, explained to GMA.

Holmstrom said hair tourniquet syndrome cases are “pretty uncommon overall” and noted that in a 2015 review from Lurie Children’s, only 81 cases of patients ranging in age from 2 to 22 years old were reported from May 2004 to March 2014.

“It most often occurs in young infants under six months, most frequently on the toe, and most of the time, patients do not need surgery,” Holmstrom added. At 5 months, Logan matched the typical patient profile.

At the pediatrician’s office, Ward estimated that Logan’s doctor and nurses spent about 40 minutes trying to remove the hair that had somehow gotten wrapped around his third right toe.

“They took a look and they had to use all these kinds of special instruments. They brought in these magnifying goggles and special lights and they had these long tweezers and like little scalpels,” Ward said. “They were going in there and they could not get it either. I mean they were able to get one small piece of it but they did not feel confident that they got it.”

Logan’s pediatrician then sent the family home with orders to monitor his condition and see if the toe would get better on its own.

“Within a few hours of being home, it felt like the toe was starting to swell some and we felt like it was starting to look a little bit purple, in the back of the toe,” Ward said. “So we became concerned again, and I took him into the urgent care center. And they sent us right to the emergency room.”

Ward said several doctors responded to Logan’s case and he was admitted to the hospital for an overnight stay. By Tuesday morning, when Logan’s toe wasn’t immediately improving, doctors told Ward they had to start considering surgery as a treatment option.

“I was just kind of in shock the whole time that it was getting to this point. I just really thought nothing of it in the very beginning because it didn’t seem to bother him and once we went into the pediatrician and they mentioned that a piece of hair got wrapped around it, I still thought it was going to be an easy fix and that well then, you can just go in and we’ll remove the hair right here in the pediatrician’s office. … I think that’s where a lot of people don’t understand the severity that these hair tourniquets can cause and that it can get to that point,” Ward said.

According to Dr. Katie Lockwood, a pediatrician at Children’s Hospital of Philadelphia, “typically, the affected body part becomes red, swollen, and sometimes has an indentation where the hair/fiber is in a circumferential pattern.”

“You will notice some redness and swelling of a digit, or the affected area, so fingers, toes and then sometimes genitals. So, more commonly the penis in males or labia in females … Sometimes it can cause breakdown of the skin so you may see a little bit of bleeding with time,” Holmstrom continued. “And if it’s been there for a really long time, the digit can actually turn purple, so not just a red discoloration but kind of purple and signs that the blood flow has not been adequate for some time.”

“If (parents notice) their babies are really fussy and they’ve checked all the usual things – they’re fed, they don’t have a wet diaper, they’re trying to console them – as a mom of a six-month-old myself, I would say, ‘Let me just take these socks off and take a peek at the toes,'” Holmstrom added.

Both physicians noted that if manual attempts at removing the hair or thread are unsuccessful, doctors will try other methods.

“We do this in the emergency room, use a chemical solution that dissolves hair,” Holmstrom said. “So over-the-counter, that’s Nair. Veet is another brand and we actually have that in the emergency room to dissolve the hair. And then worst-case scenario, if it can’t be manually or chemically removed, then surgical removal is needed.”

Ward said Logan did not need to have surgery and the hospital discharged him once his toe swelling started to improve.

“We’re actually not really sure what happened. Some of the swelling started to come down. So we’re not sure if maybe the hair removal creams might have worked. I mean, honestly, we couldn’t even tell you because we never even really saw the hair,” she said.

Her message to other parents?

“Be aware of hairs and always be checking the toes and fingers. If (you) see that a hair strand is wrapped around it, try to remove it as quickly as you can and if you can’t get it, then seek help from your pediatrician right away,” she said.

Lockwood and Holmstrom both recommend seeking medical care or contacting a pediatrician if a child can’t be consoled after all the usual methods are exhausted. Other signs it may be time to get a doctor’s opinion is if there’s any abnormal discoloration or swelling of a finger or toe that doesn’t subside.

Ward reported that it took at least a week for Logan’s toe to “fully look back to normal” and her baby boy has recovered three weeks after the incident.