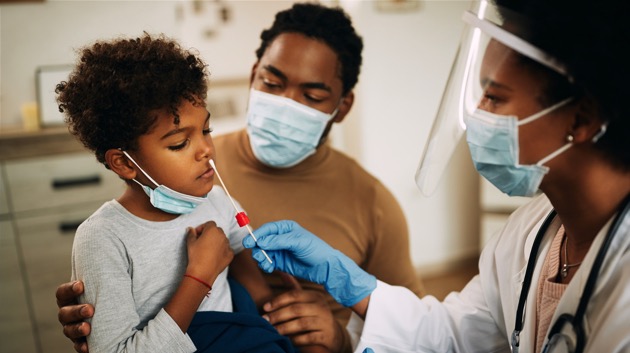 (NEW YORK) — As millions of students return to classrooms, the U.S. is facing its most significant pediatric COVID-19 surge yet, with a record number of American children now testing positive for the virus every week.

In the last week alone, nearly 252,000 children in the U.S. have tested positive for COVID-19, marking the largest increase of pediatric cases in a week since the pandemic began, according to a newly released weekly report from the American Academy of Pediatrics and the Children’s Hospital Association.

Since the onset of the pandemic, more than 5 million children have tested positive for the virus, and in the last month alone, there have been over 750,000 confirmed pediatric cases, after the country experienced an “exponential” rise in infections, according to the organizations.

The weekly figure now stands nearly 300 times higher than it was in June, when just 8,400 pediatric cases were reported over the span of a week.

The South now accounts for more than half of all new pediatric infections, according to data released by the Centers for Disease Control and Prevention.

In a similar trend, the rate of pediatric hospital admissions per 100,000 people is also at one of its highest points of the pandemic, up by 600% since the Fourth of July, according to federal data. The admission rate is also nearly 308% higher than it was a year ago.

Across the U.S., just under 2,400 children are hospitalized with a confirmed or suspected COVID-19 infection.

In Texas, where the governor has banned mask mandates in schools, there are more children hospitalized with COVID-19 than anywhere else in the country.

“We’re calling this the fourth wave … but it has certainly been by far the most impactful surge — really hitting children and adolescents,” Dr. James Versalovic, pathologist-in-chief at Texas Children’s Hospital, told ABC News.

Brennah Gurganious, 11, wound up fighting for her life on a ventilator. She was too young to get a vaccine and her mom says she got COVID just days after going back to her Texas classroom.

“Her lungs were going through hell. … They’ve been doing breathing treatments on her every four hours and then they suction her lungs out at the same time,” her mother, Terri Gurganious, told ABC News.

Severe illness and death due to COVID-19 remains “uncommon” among children, the two organizations wrote in the report.

However, the AAP and CHA warned that there is an urgent need to collect more data on the long-term consequences of the pandemic on children, “including ways the virus may harm the long-term physical health of infected children, as well as its emotional and mental health effects.”