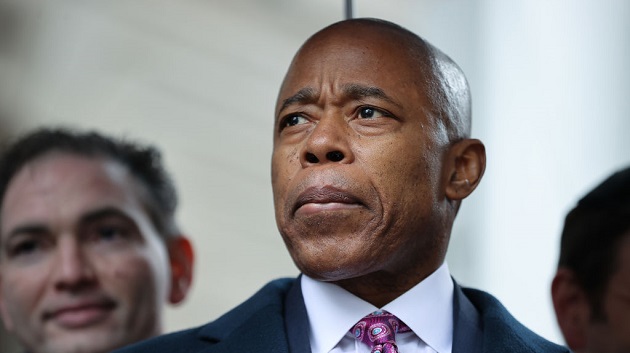 (NEW YORK) — Big Apple athletes and performers who haven’t received their COVID-19 vaccine shots now won’t be barred from taking the court or stage. But some New Yorkers who are still required to show proof of vaccination are calling foul on what they see as a double standard.

New York City Mayor Eric Adams announced Thursday that he was dropping the mandate that all city-based athletes and performers show proof of vaccination to take part in their game or event. Adams said his decision was based on the city’s low COVID-19 cases and hospitalizations and the city’s goal to restart its economy.

“We have to be on the field in order to win,” Adams said during a news conference at Citi Field, where unvaccinated Mets players will no longer have to worry about not playing when the baseball season begins next month.

Until Thursday’s announcement, unvaccinated athletes could not play home games, because venues required everyone to be vaccinated for entry. Visiting players and entertainers, however, were exempt.

This affected the Brooklyn Nets after its star point guard, Kyrie Irving, repeatedly refused to get vaccinated.

Irving was listed inactive during the first three months of the season but was called up in January for road games. He scored 43 points in his last game Wednesday against the Memphis Grizzlies.

Adams said the old rules put teams and performers at a disadvantage.

“This is about putting New York City performers on a level playing field,” Adams said.

“Broadway theatres anticipate no change in our protocols based on this announcement. We continue to evaluate our COVID safety protocols for audiences, cast and crew, in concert with our unions and medical experts,” Charlotte St. Martin, the president of The Broadway League, said.

The mayor added that the decision will help the venues and employees who work in the arenas and entertainment venues and local businesses.

But not everyone was thrilled with the mayor’s decision, particularly some unions representing city workers who are required to show proof of vaccination to work.

“There can’t be one system for the elite and another for the essential workers of our city. We stand ready to work out the details with the mayor, as we have been throughout this process,” Harry Nespoli, president of the Uniformed Sanitationmen’s Association, said.

“This exemption sends the wrong message that higher-paid workers and celebrities are being valued as more important than our devoted civil servants, which I reject. This is a step away from following sensible public health-driven policies that prioritize equity,” she said in a statement.

As of Thursday, 77.5% of all New Yorkers were fully vaccinated, and 36.3% of residents had received their booster dose, according to the city’s Health Department.

The mayor and health department have repeatedly stressed that the COVID-19 vaccines are the most effective way of preventing hospitalizations and death caused by the virus and encouraged more New Yorkers to get their shots.