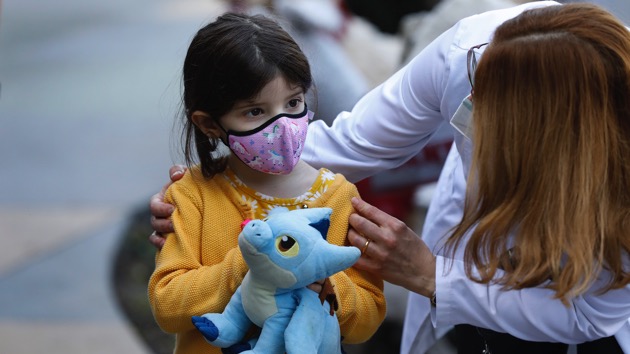 (NEW YORK) — For many parents of unvaccinated toddlers in the U.S., a return to normalcy amid the COVID-19 pandemic seems out of reach.

Many have been forced to take time off work or change their schedules to provide care for their children due to school shutdowns. Rebecca Sanghvi, a public school teacher in Washington, D.C., has a 5-year-old daughter, who is vaccinated, in kindergarten and a 2-year-old son in daycare.

Working from home is not possible for her, so she juggles the house responsibilities with her husband, who’s able to shift remotely when needed. She said it’s been exhausting to cope with the pandemic while balancing her job and parenting responsibilities.

“I do think that there’s not enough attention on the difficulties that the families who can’t do that are facing with kids being quarantined, taking time off work, often unpaid,” Sanghvi said.

Mask mandates have been lifted in many parts of the country and in-person events have resumed, but many parents feel that until their kids are vaccinated, they can’t move on from the first stages of the pandemic.

Vaccines for kids under 5 are still unavailable — though Pfizer said approvals could come in the next few weeks — and currently, there are nearly 20 million kids under 5 years old in America, according to the Children’s Defense Fund.

“People don’t realize that if you have a young child, you’re still stuck in March 2020, and that we haven’t really evolved for these young children,” Deborah Schoenfeld, a mom of three in Maryland, said.

The recent surge in COVID-19 cases due to the omicron variant has taken an even bigger toll on parents of young children. Sanghavi said the reality others have been living in, where vaccinations are widely available and daily life is looking close to “normal” again, is drastically different to hers.

Some schools and daycares across the country have reopened despite the rise in cases, leaving young unvaccinated students with higher risks of getting contaminated, and consequently, bringing the virus home.

These surges in schools have left parents — like Anagha Phadkule — struggling to find ways to care for their children while working full-time jobs.

Phadkule is from Portland, Oregon, and works in a hospital, while her husband works from home. Their 3-year-old son, Aroosh, had to spend most of his time home after his daycare shut down twice in January due to COVID-19 outbreaks among the staff.

Her son’s unvaccinated status leaves Phadkule worried about his safety.

“It feels like a very reckless time to push your toddler into daycare and be like, ‘OK, whatever happens, happens,'” Phadkule said.

The frequent school shutdowns have led some parents to change their routines permanently. Schoenfeld, for example, made the decision to keep her son at home after his daycare was shut down several times over the past few weeks.

“My childcare situation has gotten increasingly hard. I almost feel like in 2021 it was easier. They were still figuring out what to do with COVID, but there weren’t so many cancellations and quarantines,” Schoenfeld said.

Other parents, who don’t have many options left, find themselves taking their kids to work in hopes to juggle both responsibilities. But the move has proven to be more stressful than expected.

“Sometimes, [my husband] was busy and I had to take even my kids to work for showings, for times that I had appointments with different clients … I had an issue with a client where she told me that it was unprofessional for me to show up with my kids,” Eddie Suarez, who has a 3-year-old, said.

Brigid Schulte, director of The Better Life Lab and Good Life Initiative at New America, said many parents are feeling “unheard” and “invisible,” as they don’t think their struggles are being considered.

“We’re talking about real existential threats to family survival right now — at a time when so many families thought that we had rounded the corner,” Schulte said. “This is hitting everybody. This is sort of an equal opportunity exhaustion, disruption, uncertainty and a disastrous situation for so many families.”

So what is the solution? Many parents believe the authorization of vaccines for children 5 and younger will change things for the better.

“I’d rather them take their time and … make it right, make it safe. I don’t want to feel like this push in this rush to get it done if it’s not ready yet,” Schoenfeld said. “But I don’t want to be like a hostage or prisoner waiting for the vaccine, like I need child care. That’s going to work for us right now … or something needs to, because this cannot continue. It’s too hard.”