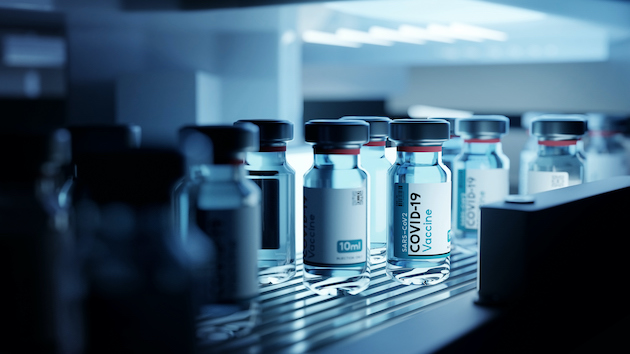 (WASHINGTON) — Pfizer CEO Albert Bourla said on ABC’s “This Week” Sunday it’s possible to provide both COVID-19 booster shots as well as doses for people who have not yet been vaccinated.

With millions more Americans now newly eligible for a booster COVID-19 shot from Pfizer, Bourla’s optimism punctuates what’s become a protracted, hot-button issue amongst the scientific community over who needs the boost and when. The White House has stressed in both private and public that the rationale for green-lighting boosters must be uncoupled from the question of global vaccinations and that one does not preclude the other.

Just after midnight Friday, Centers for Disease Control and Prevention Director Rochelle Walensky endorsed her independent advisory panel’s recommendation for seniors and other medically vulnerable Americans to get a booster shot of Pfizer’s COVID-19 vaccine six months after their second dose, partially overruling the panel by adding a recommendation for a third dose for people who are considered high risk due to where they work.

On ABC’s “This Week” Sunday, Bourla called that decision a “very good one.”

“We are looking forward to being able to vaccinate all these vulnerable people so that we can put an end to this pandemic,” Bourla told ABC’s Stephanopoulos.

The CDC’s final sign-off at least in part buttoned up what has become a seething scientific debate on the issue. The Biden administration announced there would be “boosters-for-all” before any review from federal regulatory bodies or their independent groups, and while some political appointees had endorsed that timeline, some federal career scientists and advisers vehemently objected to the incomplete data they were being asked to assess — and that there should be a more global focus on getting more first shots in arms.

The booster debate has played out amid the delta variant’s surge, even as the World Health Organization has reupped their call for a moratorium on booster shots in the interest of more equitable distribution of primary vaccinations, as many countries are still struggling with providing first and second doses.

On Sunday, Bourla expressed pride at the service his company had stepped up to offer and the “millions of lives” saved by the vaccine. But Bourla pushed back on criticism his and other pharmaceutical companies making the vaccine could be doing more to help put an end to COVID’s spread, including waiving intellectual property rights to speed up manufacturing.

“Intellectual property is what created the thriving life sciences sector that was ready when the pandemic hit,” Bourla said. “Always there is more we can do, but I want to make sure people understand what we are doing right now.”

That includes, he said, the commitment Pfizer has made to be able to produce billions of vaccine doses for both primary shots and boosters and pricing them lower for middle- and low-income countries.

Meanwhile, as the academic year kicks off in into the pandemic’s uncertainty for a second time — and as pediatric COVID infections have soared to alarming levels — Pfizer’s Bourla told Stephanopoulos they expected to submit their data to the FDA for review very soon.

On Wednesday, Pfizer released its first safety data about COVID-19 vaccines for children ages 5 to 11, reassuring parents that a safe and effective vaccine soon could be available for those younger than 12. In a trial of more than 2,200 children, results showed a smaller dose of Pfizer’s vaccine — one-third the amount given to adults and adolescents 12 and up — provided robust and adequate immune responses among those ages 5 to 11.

“I think we are going to submit this data pretty soon. It’s a question of days, not weeks,” Bourla said, deferring to the regulatory review process for final answers.

If and when the FDA does agree with Pfizer’s assessment, Bourla said his company is poised to finally begin providing shots to younger children.

In the midst of the promising data his company has touted, however, Bourla tempered his prediction for when the U.S. and world could finally return to “normal life,” underscoring progress is dependent on improved vaccine uptake and some measure of herd immunity.

While he said “within a year” he believes “normal life” will make a return, “The most likely scenario for me is that because the virus is spread all over the world, we will continue seeing new variants that are coming out.”

With that, he predicts annual vaccinations will be the norm.

“But we don’t know. We need to wait and see the data,” he added.