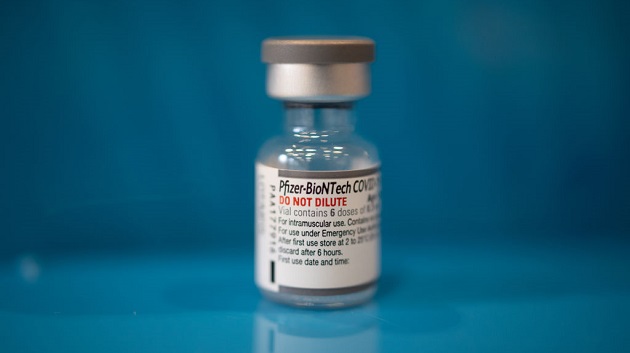 (NEW YORK) — By this fall, pharmaceutical giant Pfizer and its partner BioNTech could potentially have a COVID-19 booster that specifically addresses the omicron variant as well as its subvariants and other known strains of the virus, CEO Albert Bourla said during a panel Wednesday.

“It is a possibility that we have it by then; it’s not certainty,” Bourla said. “We are collecting data right now, and as far as I know, Moderna, as well as us, we are working on omicron or different enhanced vaccines,”

“I hope clearly by autumn … that we could have a vaccine, if we have one that works,” Bourla said.

Once enough data is aggregated, Bourla said the company will submit data to the Food and Drug Administration.

“It makes sense to think in terms of at least having ready an omicron-specific boost,” Fauci told MSNBC in January.

Last month, Moderna also announced it had started phase 2 trials of its omicron-specific booster vaccine, which will ultimately include 375 adults in the U.S.

In February, Moderna President Stephen Hoge said he believes the combination approach – which they call a “bivalent” vaccine — could offer more durable protection while preserving activity against “ancestral” variants.

“We do believe, as we’ve said, that it is time to update the vaccine against the mutations that are currently circulating and to improve the durability against those new variants of concern,” Hoge said during an investors call in February.

The push to develop omicron specific boosters come as the omicron subvariant BA.2 sweeps the globe and as new subvariants continue to pop up.

New York has had a recent surge of infections in the central part of the state, which officials said is likely fueled by these two new subvariants. Although they are thought to be highly contagious, so far, there is no evidence to suggest they cause more severe illness.

“We are alerting the public to two omicron subvariants, newly emerged and rapidly spreading in upstate New York, so New Yorkers can act swiftly,” state Health Commissioner Dr. Mary T. Bassett said in a statement Wednesday. “While these subvariants are new, the tools to combat them are not. These tools will work if we each use them: get fully vaccinated and boosted, test following exposure, symptoms or travel, consider wearing a mask in public indoor spaces, and consult with your health care provider about treatment if you test positive.”

For the month of March, BA.2.12 and BA.2.12.1 rose to collectively comprise more than 70% prevalence in central New York and more than 20% prevalence in the neighboring Finger Lakes region, state data shows, and data for April indicates that levels in central New York are now above 90%. The state reported that its findings are the first confirmed instances of significant community spread due to the new subvariants in the U.S.

Across the state of New York, reported infection and hospitalization rates have been steadily on the rise for weeks.