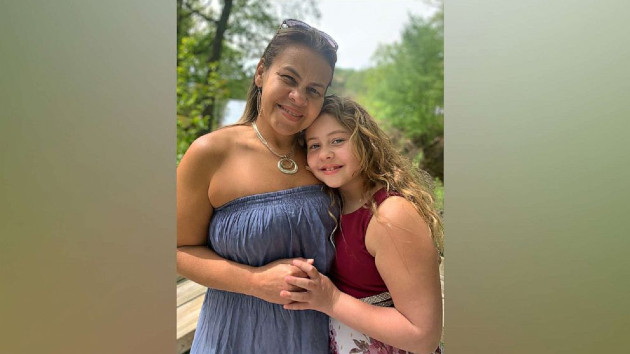 (NEW YORK) — Meire Carlos was suffering from chronic kidney disease but like the estimated 90% of people who have the disease, she was not aware of it.

In June 2021, after experiencing headaches and a sudden spike in her blood pressure, Carlos was rushed to the hospital where three days later she was diagnosed with renal failure at only 43 years old. She had no other symptoms.

Carlos said doctors told her 75% of her kidneys were “destroyed”. Less than a year later, her kidneys are operating at 10% capacity and her diagnosis has progressed to end-stage renal failure.

In dire need of a kidney, Carlos, a Brazilian native who lives in Greenwich, Connecticut, was placed on a transplant list with a five-year waiting period. Since her diagnosis, she and her support system have been working to find a living donor.

Carlos, who is on the transplant list under her full name, Meire de Lima Carlos Santos, is not alone in her ordeal. Chronic kidney disease affects more than 1 in 7 U.S. adults, according to the Centers for Disease Control and Prevention.

Mike Spigler, the vice president of patient support and education at the American Kidney Fund, told ABC News that cases of seemingly sudden onset kidney disease affect many of the patients they work with. He says the organization’s Unknown Causes of Kidney Disease Project is focused on seeking out these causes and spreading awareness on how they affect patients if they go undiagnosed.

The organization highlights the importance of taking preemptive measures, like getting tested for those at risk with preexisting conditions like diabetes or high blood pressure. The organization recommends two main tests: the glomerular filtration rate and urine albumin-to-creatinine ratio tests. Both can be ordered by a healthcare provider.

“One is a blood test that gives you an estimate of something called GFR…it’s basically how fast your kidneys filter your blood which gives you a sense of kind of where you are in the staging of the five stages of kidney disease,” Spigler said. “But that only really starts to trigger in around stage three. Stage one and stage two are identified by a urine test…and one of the most common tests is something called UACR–urine albumin-to-creatinine ratio.”

Kidney disease disproportionately affects Black, Hispanic and Latino, Asian American Pacific Islander, and Indigenous communities. According to the National Kidney Foundation, “Black or African Americans are more than 3 times as likely and Hispanics or Latinos are 1.3 times more likely to have kidney failure compared to White Americans.”

“Obviously, I think historical and systemic racism has played a role in in that for sure, all the way down to direct interactions with patients but also you know, just neighborhood structure and food deserts,” Spigler said.

He said these issues can contribute to a patient’s struggle to find a donor match.

“If a disease is ravaging your community that you live in, and there’s other people with kidney disease in it, it’s obviously, clearly, harder to find a living donor from somewhere in your family or in your neighborhood,” he said.

Carlos, who emigrated from Brazil 23 years ago, said the Brazilian community in New York, and where she now lives in Greenwich, Connecticut, has been a tremendous support throughout this time, but she has yet to find a match. Carlos says that the process of looking for a donor while taking several medications and attending frequent appointments has been “very hard to take in” but her 10-year-old daughter, Melanie, who she lives alone with, keeps her going.

“She’s my whole thing, so we’ve been together all the time,” she said. “We’re very close.”

Carlos says she tried to shield her daughter from her diagnosis, but just recently told her what she was going through.

“I put my story on social media, so I had to explain to her what was going on and [at] the same time tell her not to worry about it because everything’s gonna be fine,” she said.

Roseann Bleier, who employed Carlos as a babysitter for her children when she first moved to the U.S., has gone to several of her appointments. She, along with Ilyssa Londa, who Carlos works for as a housekeeper currently, have also taken to social media and contacted several organizations to get the word out about her search for a kidney donor.

“That’s the number one thing people can do is see if there’s anybody in their lives or get the message out that this young woman needs a kidney,” Bleier said.

For those interested in being a donor, Spigler said kidney health, medical history, emotional state and blood type are all key factors in determining a match. Recipients generally cover costs related to the transplant surgery.

“Transplants [are] definitely, you know, the best option for patients for lots of reasons. It’s a treatment, it’s not a cure, but anything we can do to get more organs out there and to encourage people to be living donors is important,” he said.

Carlos remains hopeful that she will find a donor soon so she can visit her family in Brazil and continue to support her daughter.

“We’re going to be so happy for my daughter, you know, for myself too,” she said. “She’s my priority.”