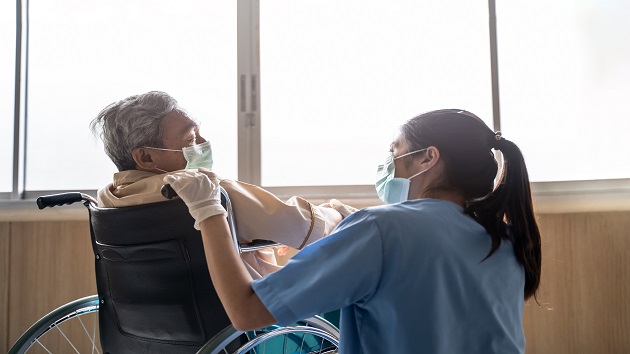 (NEW YORK) — The Biden administration in recent weeks has announced a series of mandates that require long-term care facilities to fully vaccinate staff against COVID-19, drawing mixed responses from providers, industry leaders and advocates, including those who said the federal policies will put extra strain on an industry already suffering a workforce shortage.

But some nursing homes said they’ve already successfully implemented their own mandates without a significant impact on their workforces, which officials say showcases how the new federal rules can be carried out to protect vulnerable elderly residents amid yet another coronavirus surge.

President Joe Biden’s mandate, announced last month, directly targets nursing homes — employees in long-term care settings must be vaccinated for those facilities to continue receiving federal Medicare and Medicaid funding. Additional White House announcements made this week could also indirectly affect nursing homes, including an upcoming Occupational Safety and Health Administration rule that would mandate private businesses with at least 100 employees require employees to either be vaccinated or undergo weekly testing. Businesses that don’t comply with the agency’s rule could face fees of up to $14,000.

The proposed rules would also require health care facilities that receive Medicare and Medicaid reimbursement to have a vaccine mandate.

Genesis HealthCare, one of the largest nursing home providers in the country, said almost 100% of its staff was vaccinated by Aug. 23, except for a “small number of individuals who received medical or religious exemptions,” spokesperson Lori Meyer told ABC News.

“Thoughtful and supportive dialogue, clinician-led family and peer discussions about the safety and efficacy of the vaccines, and the looming federal mandate all played important roles in seeing the vast majority of our unvaccinated employees choose to become vaccinated,” said Meyer, adding that two weeks after Genesis finished vaccinating its staff, COVID cases among residents declined by nearly 50%.

When the nationwide push to vaccinate the most vulnerable population began in December, nursing homes were at the front of the long-term care industry’s battle against the pandemic, with facilities across the country reporting more than 33,000 cases and 6,000 deaths a week.

As of Aug. 29, the latest weekly data available, nursing homes reported an average of 84% of residents per facility vaccinated and roughly 63% of staff vaccinated, federal data shows.

In recent weeks however, COVID cases and deaths have been on the rise again in long-term care facilities as the delta variant rips through the country.

A recent study published by the Centers for Disease Control and Prevention found that the effectiveness of Pfizer and Moderna vaccines among nursing home residents has declined significantly over the past few months with the advent of the delta variant, from 74.7% in March through May to 53.1% in June and July.

Experts have cited this data to advocate for multi-pronged and layered prevention strategies for nursing homes, including vaccinations of staff members, residents and visitors, contractors, as well as appropriate testing and possible booster shots.

Most of the facilities with the lowest vaccination rates are in Florida, Texas, Missouri and Ohio, where vaccine hesitancy rates tend to be higher.

The Jewish Home Family, a New Jersey-based senior care facility in a part of the state ravaged by the pandemic, is one of the nursing homes that’s finished vaccinating all employees. During that process, the facility ended up letting go five of 350 employees, CEO and President Carol Silver-Elliott said during a press conference last week.

“We felt it was a small price to pay to keep our elders safe, and it is something we feel very very strongly about,” Silver-Elliott said. “It doesn’t take much to invoke those images of what horrible experiences we all went through, and to all of them suffered losses of friends and colleagues and family members and elders, so I think that made a difference too.”

Dayspring Senior Living in northern Florida, near the Georgia state line, has had a vaccine mandate in place for all employees since January, achieving 99% compliance, Executive Director Doug Adkins told ABC News.

He said one employee sought medical accommodation, and another who resigned rather than get a vaccine ended up getting vaccinated and returning to work. Late last week, Dayspring Senior Living rolled out booster shots for staff and residents approaching the eight-month mark since getting vaccinated, Adkins said.

“No one likes to be told what to do — this is no different,” Adkins said, but “once the employee is vaccinated, then I believe they appreciate the fact that the majority of the workforce is vaccinated and the environment is safe.”

Despite his facility’s successful staff vaccination effort, Adkins said rather than create a mandate tied to federal funding, a better approach would have been to offer tax incentives to companies that decided on their own to implement a vaccination mandate to help them compete and develop a workforce that helps keep residents safe amid ongoing staffing shortages.

The American Health Care Association and the National Center for Assisted Living, which represents more than 14,000 nursing homes, as well as other local nursing home advocates, are urging the Biden administration to expand the vaccine requirement to all health care settings, not just nursing homes.