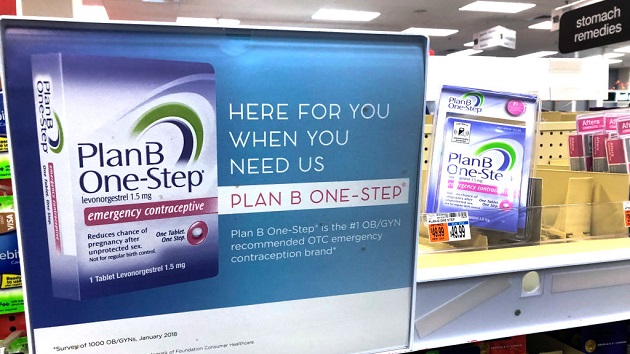 (NEW YORK) — Two of the country’s largest pharmacy chains, CVS and Rite Aid, confirmed to ABC News this week that they had restricted the amount of Plan B or morning-after pills a customer could buy, following a spike in demand for emergency contraceptive drugs in recent days.

In the case of CVS, the restrictions have since been dropped, according to company officials.

The rise in demand for Plan B pills came after the Supreme Court ruled on Friday to overturn the landmark Roe v. Wade decision, which previously set a 49-year precedent for legal abortion in the U.S., at the federal level.

Following the ruling, Justice Clarence Thomas suggested other past court decisions, including the 1965 Griswold v. Connecticut decision — which ensured the right of married couples to buy and use contraception, and the right to marital privacy — should be reconsidered as well.

A CVS spokesperson told ABC News that while CVS pharmacies had temporarily limited Plan B purchases to three at a time, given high demand, the company had since eased those restrictions as sales leveled off.

“Immediately following the Supreme Court decision, we saw a sharp increase in the sale of emergency contraceptives and implemented a temporary purchase limit to ensure equitable access,” the spokesperson said. “Sales have since stabilized and we’re in the process of removing the purchase limits, which will take effect in-store and on CVS.com over the next 24 hours. We continue to have ample supply of emergency contraceptives to meet customer needs.”

Rite Aid, as of Tuesday afternoon, was still restricting purchases of the morning after pill due to high demand.

A spokesperson told ABC News in a statement, that “due to increased demand, at this time we are limiting purchases of Plan B contraceptive pills to three per customer.”

Walmart officials, meanwhile, have not said whether they will specifically place buying limits for morning-after pills. A company spokesperson told ABC News that “many of [Walmart’s] products have online purchase limits in place,” but did not specify what kind of limits, if any, would be applied to purchases of Plan B or morning-after pills.

“During times of fluctuating demand, these limits may change,” they said.

Plan B or morning-after pills, which stop pregnancy before it happens, are different than abortion-inducing pills. Morning-after pills are instead a type of emergency contraception that can be taken orally up to five days after intercourse — though it is recommended that they be taken within 72 hours, to be more effective — to prevent an egg from being fertilized or delay ovulation, thus preventing unintended or undesired pregnancy.

Morning-after pills can be used when a birth control method fails, or if no birth control was used, according to the Centers for Disease Control and Prevention.

Levonorgestrel, the generic name of the drug used in Plan B, is sold over-the-counter under various brand names, including Plan B One-Step, AfterPill, Aftera, EContra One-Step, My Choice, My Way, Next Choice, Option 2, Preventeza, and Take Action.

Another type of morning-after pill, ulipristal acetate, is sold under the brand name Ella and usually requires a prescription.

This article has been updated to include comments from a Walmart spokesperson, and to add new information from a CVS spokesperson on the company’s move to halt temporary purchasing limits on morning-after pills.