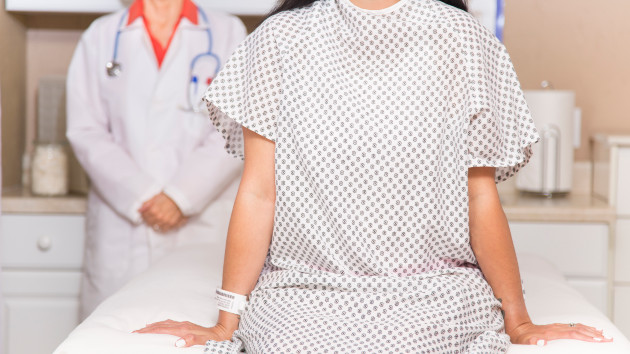 (NEW YORK) — Egg freezing — a process that involves collection, freezing and storage of a woman’s eggs with the intention to use at a later time for pregnancy — is more widely available than it was even five or 10 years ago, but it is still a complicated decision for many women.

There is the cost — often thousands of dollars — as well as the fact that a woman’s biological clock keeps ticking even amid egg freezing.

There is also the unknown for so many women around egg freezing, from what exactly it entails to how often it works to any potential side effects to what it means to keep eggs in storage for possibly years.

When Courtney Hunt, 34, of New York, decided to freeze her eggs nearly two years ago, she chose to document the process and share it on her YouTube channel.

“I wanted to document this whole process because I think it’s important to really open the conversation,” Hunt told ABC News’ Good Morning America. “By documenting it, I could help educate people, inform people, and kind of just give women in general an opportunity to see another woman kind of going through [the process].”

She continued, “I think we do often feel alone in a lot of these experiences because we don’t talk about about a lot of these [topics] in conversations, miscarriages or IVF or egg freezing.”

GMA reached out to medical experts to talk more about the egg freezing process and what women should know. Here are five questions answered by the experts:

1. Why are more and more women turning to egg freezing?

After over 30 years of advancements since the first human birth from a frozen egg was reported in 1986, egg freezing is now widely available to women who may choose to delay child-bearing.

Traditionally, women resorted to egg freezing due to medical conditions such as a cancer diagnosis requiring chemotherapy, which can damage reproductive cells, or genetic abnormalities that shorten reproductive years. In 2012, the American Society for Reproductive Medicine lifted the “experimental” label from egg freezing, allowing it to be utilized more widely.

The number of women who utilize egg freezing is expected to continue to grow as the technology becomes more accessible and better understood, experts say.

“There is just more information out there now for women,” Dr. Elizabeth Sarah Ginsburg, medical director of assisted reproductive technologies at Brigham and Women’s Hospital in Boston, told ABC News. “Women are now more aware of the age-related decline in fertility that women experience.”

While there are many medical reasons for egg freezing, today many women are also turning to egg freezing to focus on their careers or postpone having children until they are partnered.

“Most of the women that I see are freezing their eggs because they don’t have a partner,” Ginsburg said, also adding, “I’ve had women who are married freeze eggs to start their own companies or because they’re up for a promotion and they know their eggs are aging but can’t take time out to have a baby.”

In Hunt’s case, she said she took advantage of the opportunity to freeze her eggs when she learned the process was paid for by her then-employer. She said she did it as assurance that when she is ready to have kids, the option is there.

“It was never a battle in my mind of all the what-ifs and what if this doesn’t happen with a partner or what if this does,” said Hunt. “I was just doing this, selfishly, for myself to make sure that I do have an opportunity if and when I want kids, however that comes about for myself.”

2. What is the process of egg freezing?

The total time commitment for an egg freezing cycle is about two to three weeks and involves continuous monitoring with ultrasounds to time each of the steps.

Ovarian stimulation involves self-administering daily injections for about two weeks to grow multiple eggs in the ovaries to eventually collect and freeze. For many, this step may be the most physically and emotionally draining.

“Making sure you’re doing things right in such a delicate and, frankly, expensive process is something that even worried me when I knew what I was doing,” said Dr. Samantha Estevez, a clinical fellow in the division of reproductive endocrinology and infertility at the Icahn School of Medicine at Mount Sinai who went through the egg freezing process herself.

Most commonly, women experience mild fullness, bloating and cramping during their cycle.

“The ovaries get pretty big. A normal ovary, not stimulated, is about the size of a walnut. In women who stimulate a lot and get say 20 eggs, ovaries will be the size of an orange,” Ginsburg said.

Once the eggs reach their target size, a different injection, referred to as the “trigger shot,” is administered to make the eggs undergo their final maturation for retrieval.

The egg retrieval procedure is then typically scheduled 36 hours after this injection. This is a procedure done under sedation with vaginal ultrasound guidance to collect the matured eggs.

After the eggs are collected, they are then frozen in liquid nitrogen and stored until the person decides to come back for them.

For those who return for their eggs with the hopes of becoming pregnant, the frozen eggs are thawed and fertilized in the laboratory using donor or partner sperm to make embryos and undergo genetic testing if desired, then transferred into the uterus for pregnancy.

3. What is the cost of egg freezing?

The cost of egg freezing can be highly variable. For anyone considering egg freezing, experts recommend understanding the breakdown of the costs and the factors that can influence these costs to estimate final costs for an individual.

“There is usually a global fee that includes all the monitoring, the anesthesia, egg retrieval and freezing for that cycle of the two-week period from that first ultrasound to the egg removal and freezing of the eggs,” Ginsburg said, adding that the net cost for an individual may be higher or lower depending on insurance, employer, region and the fertility center. “Patients really need to call around to find out.”

At CCRM, a fertility clinic network with 11 locations across the U.S. and Canada, the average cost of a single egg freezing cycle is $9,232, according to Dr. Jaime Knopman, a board-certified reproductive endocrinologist at CCRM New York.

Other expenses, including medications and anesthesia, total over $6,000 on average at CCRM, according to Knopman, who added that the cost depends on each individual person.

“Older women or those with lower ovarian reserve would pay more in total, but not because the process is more expensive,” said Knopman. “The cost is higher because medication dosage is higher, and therefore the cost of medications is higher.”

People who are older may also need to do more than one cycle of egg freezing, which comes at an additional cost, Knopman explained.

After the egg retrieval, storage comes at an additional cost depending on how long a person would like to freeze their eggs. Storage can cost anywhere from a few hundred dollars to over $1,000 per year.

At CCRM, for example, the average annual cost of storage is $775.

If a person ultimately decides to use the eggs they have frozen, there is also additional cost involved.

“People going into egg freezing also need to recognize that this is just the first step, not the final step when it comes to fertility preservation if they end up using the eggs,” Estevez said. “The transfer cycle is less involved than egg freezing cycle but almost financially equivalent.”

Knopman said she tells patients at CCRM to expect to pay around $10,000 for a frozen embryo transfer, a total that includes medications and the process itself.

4. What is the right age to consider egg freezing?

Although most women who undergo egg freezing in the U.S. are in their late 30s, the younger you are, the better, data shows.

According to a study published in 2020 in the journal Human Reproduction, success rates for live births were double for women who stored their eggs at age 35 and younger.

“There is no question that pregnancy rates are higher if women are younger,” said Ginsburg, adding that, “A higher percentage of eggs in the ovaries are chromosomally abnormal the older women get, so the less likely a particular egg is to result in a pregnancy.”

Once a woman reaches the age of 30, her fertility starts to decline, according to Dr. Nita Landry, a Los Angeles-based board-certified OBGYN.

“Once she reaches her mid-30s, especially around 37, that decline becomes faster,” Landry said. “Once a woman is 45 years of age, the probability of her conceiving without any fertility intervention is going to be low.”

The risks associated with pregnancy also increase as a woman ages.

Studies show that women who become pregnant at an advanced age inherently have an increased risk for pregnancy complications such as gestational diabetes, hypertension, pre-term birth and low birth weight.

Therefore, women who get pregnant in their late 30s or 40s may not have successful pregnancies regardless of how old their eggs were when they were frozen.

5. What are alternatives to egg freezing?

There are options other than egg freezing for those who are not partnered but are ready to become parents now. Women can get pregnant using their own eggs with donor sperm rather than freeze and store their eggs.

“Some women think about freezing eggs and when they realize they really want a baby and decide that a partner is not critical to their life being fulfilled, donor insemination is the other way to go,” Ginsburg said. “That tends to happen more in women in their late 30s.”

Some also choose to freeze embryos rather than eggs because of higher success rates for live births.

“Often when someone is married, they will freeze part eggs and part embryos because of the fact that if a man gives his sperm and embryos are frozen, he has a say in whether they can be used or not later,” Ginsburg said. “So I think egg freezing is favored from a reproductive autonomy standpoint.”

Women now have many options in reproductive technologies. Although costs remain a barrier for many, these technologies may become more affordable as they continue to grow in popularity.

“I think insurance companies are doing better and better about paying for egg freezing that is medically indicated,” Ginsburg said. “I think it’s also going to increasingly be a benefit of employment especially in firms that are trying to increase the number of women in their ranks.”