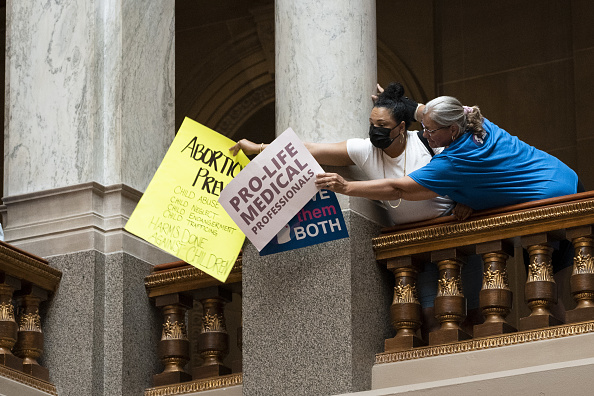 At least 15 states have ceased nearly all abortion services and an additional four states have bans that have been blocked in court and are undergoing legal challenges.

Despite an ABC News/Washington Post poll finding 79% of Americans support making abortion legal in exceptions of rape, only four states with active bans allow for such exceptions, according to the Guttmacher Institute, a research group focusing on sexual and reproductive health.

Proponents of anti-abortion bills have argued that a fetus should not be “punished” because of the crime and be allowed a chance to be born, but they are trying to help women find some recourse after suffering through a horrific act.

But abortion rights advocates and experts told ABC News it’s more complicated than that. They say that while such exceptions do help prevent a pregnant person from living through the trauma of giving birth to their rapist’s baby, they say the exceptions may work in theory but not in reality.

They explained some of the language in these laws make it unclear how a provider is supposed to validate a patient’s accusation of rape, or the providers may be scared to act due to fear they will be prosecuted if they act outside the law.

Additionally, they say women may be too scared to come forward when they’ve been raped, or if they do and are required to report the assault to the police, may experience additional trauma by having to relive the crime.

“It’s not whether there’s simply a law that happens to be on the books,” Michele Goodwin, a law professor at the University of California, Irvine, whose expertise includes health law and reproductive rights, told ABC News. “It’s whether the law is more real than illusory. For so many of the exceptions that are being drafted now, what you have is not entirely meaningless but so difficult to navigate that they essentially become kind of a fool’s gold.”

She added, “One can have rights on paper, but they become very useless and lack meaning until they’re placed in practice.”

Of the states with abortion exceptions for rape, three — Georgia, Idaho and Mississippi — require a police report to be filed before requesting an abortion.

Oklahoma also has an abortion ban, HB 4327, signed by Gov. Kevin Stitt in May with exceptions for rape that requires a police report as well. However, the state has passed multiple contradictory abortion bills in the past year including one a month earlier that Stitt signed, which does not have exemptions for rape or incest.

State Rep. Jim Olsen said the exceptions for rape were added because the bill allowed anyone who “aids or abets” an abortion to be sued for up to $10,000 in damages but lawmakers didn’t want the rapist to be allowed to sue.

However, he believes that generally abortion bans should not include exceptions for rape.

Most sexual assaults are not reported

However, most rapes are not reported to the police. In fact, according to the Rape, Abuse & Incest National Network, two out of every three sexual assaults go unreported.

Elizabeth Nash, interim associate director of state issues at the Guttmacher Institute, said there are several reasons why someone might not report their rape – especially if they’re pregnant – including fear of retribution from the rapist [or the person who raped them], fear people won’t believe them or fear of ostracization from their community.

“When you combine the need to report in order to access an abortion, you’re really putting a barrier in place for someone to get the abortion that they need,” she told ABC News.

Goodwin said having to report the assault can be like a second trauma for a victim of rape.

“There is tremendous trauma that can result from being pregnant when one does not wish to be that is only magnified after one has been raped, becomes pregnant, and due to that rape, and then has to go through the interrogation,” she said. “Because, when a person, when a woman, when a child files a report about being raped, it’s not as if someone presents them with a comfortable environment. Instead, questions are asked, and those questions without the proper training and sensitivity can be quite harsh.”

Experts say abortion providers may be unsure how to proceed in exceptions for rape. Although the laws require a police report to be filed, it’s unclear if anything specific needs to be in the report or if the victim needs to take any other steps.

“It’s not entirely clear what all is required or if providers will be able to meet the letter of the law in providing an abortion under the rape exception,” Nash said. “There’s this concern that if a provider tries to meet the requirements of the exception that, in some way, they will fall short and then the state will prosecute them in some way.”

She said these exceptions could potentially dissuade providers from performing abortions under the rape exception for fear of potential prosecution or lead to clinics moving their services across state lines where abortion access is freer.

For example, even though North Dakota’s abortion ban, which includes an exception for rape, is currently blocked in court, the state’s sole abortion clinic — the Red River Women’s Clinic located in Fargo — said it will be providing abortions in Minnesota.

“Abortion is still legal in North Dakota, for now,” the clinic wrote on its website. “However, Red River Women’s Clinic has made the commitment to continue to provide abortion care to our region, so we have moved our services across the river to Moorhead, MN.”