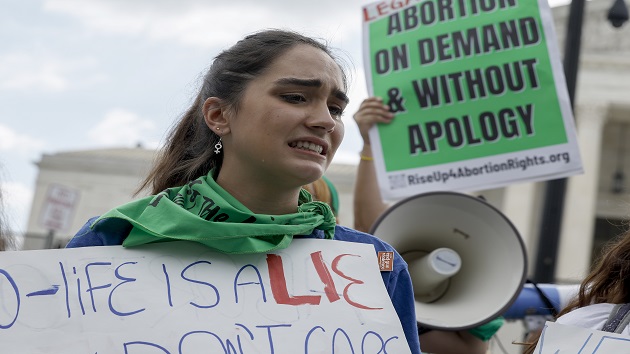 (WASHINGTON) — As reactions to the Dobbs decision roll in, Congressional Democrats are outraged. But don’t expect that outrage to translate to passable legislation anytime soon.

Any effort to codify a woman’s right to choose would need to clear the Senate filibuster. That means 60 votes. And those votes are nowhere to be seen in the Senate.

Undoubtedly, today’s Supreme Court decision will reignite discussion among some progressives about overturning the filibuster to try to codify the rights previously enshrined in Roe v. Wade. They’ll have to wait to see if those discussions gain any traction, but 50 votes are needed to change the Senate rules.

That will need the support of Democratic Sen. Joe Manchin of West Virginia, who has been exceptionally clear that he doesn’t support a filibuster carve out. Without his support, the Senate rules can’t be changed.

In a statement today following the ruling, Manchin said he’s hopeful for a bipartisan solution (which, if some are reading the Joe Manchin tea leaves, likely means a path forward that does NOT involve a change to the Senate rules).

When the draft Dobbs decision leaked in May, reporters chased after Manchin to ask him if he’d support a filibuster carve out to codify Roe. He held the line then on defending the Senate rules. He was asked if he’d be willing to get rid of the filibuster in light of the ruling if it meant Democrats could be successful in their efforts to codify Roe.

“The filibuster is the only protection of democracy,” he said.

When reporters pushed him on women who are going to be affected by the ruling, he said, “We’ve protected women’s rights with the filibuster, so we have to look at it. But the bottom line is it is the only check and balance we have.”

It’s deeply unlikely Manchin will have a change of tone. Which means any legislative efforts are going to be largely for show. That’s a road that Democrats have already gone down. Democrats forced a vote on the Senate floor on the Women’s Health Protection Act in May. It failed 49-51 (Sen. Joe Manchin opposed it because he felt it was more sweeping than simply codifying a right to an abortion).

Republican Sens. Susan Collins of Maine and Lisa Murkowski of Alaska said they support codifying a woman’s right to choose, but their support isn’t enough to get to 60.

“Our goal with this legislation is to do what the Court should have done — provide the consistency in our abortion laws that Americans have relied upon for 50 years,” she said.

If that effort fails to gain traction, where does that leave abortion rights supporters? Looking toward the 2022 election. That’s why Senate Majority Leader Chuck Schumer and others today have been calling on Americans to take to the polls in November.