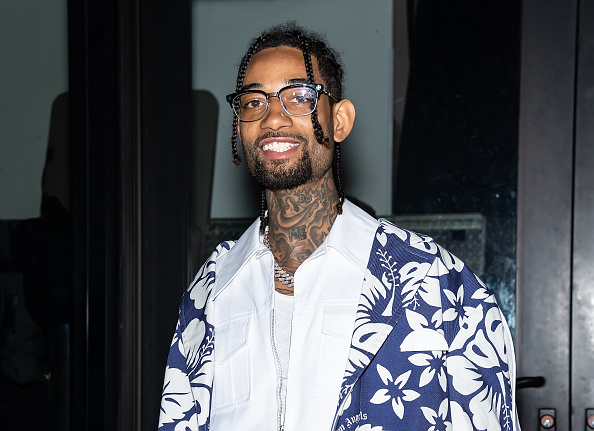 (LOS ANGELES) — Family, friends, fans and hip-hop stars are mourning the tragic death of rapper PnB Rock, who was shot and killed on Monday afternoon during a robbery in South Los Angeles. He was 30.

His brother, rapper PnB Meen, expressed heartbreak and grief in an Instagram tribute, along with a photo of the brothers as kids.

“Rock I love you big brother with my whole entire Heart an soul … Im sorry it wasn’t me . Why they take The one that provides for the whole family,” he added and pledged to take care of his late brother’s two young daughters.

The rapper, whose legal name is Rakim Allen, was fatally shot during a robbery at Roscoe’s Chicken & Waffles while dining with his girlfriend. According to police, a suspect demanded jewelry and other valuables before getting into a struggle with Allen and opening fire.

Allen’s death is the latest in a string of shootings and killings of prominent rappers in recent years, as well as up-and-coming local artists – from Chicago to New York City – who were shot and killed at a young age during attempted robberies or violence stemming from reported disagreements.

The Philadelphia-born rapper was a force on the East Coast and collaborated with some of the biggest artists in the hip-hop industry as an artist and a producer.

Hip-hop stars from Drake and Young Thug, to Meek Mill and Nicki Minaj posted tributes to Allen on social media, with some reflecting on the violence that has continued to plague the hip-hop community.

“Rip dawg you didn’t deserve that…. Every time I see one of my friends bleed out on camera or killed on camera, I feel a sick feeling I can’t even really explain… it puts me more and more back in survival mentality!” Meek Mill tweeted.

According to a May 2022 report released by the Centers for Disease Control and Prevention (CDC), Gun violence is a growing public health issue in the U.S. and disproportionately impacts Black people.

According to the report, Black people are at least four times more likely to be shot and killed than the overall U.S. population.

“My heart is hurting for the MOTHERS OF THESE KIDS that tried to make something better of their lives!!!” Nicki Minaj tweeted after PnB Rock’s death.

Chicago rapper Smokepurpp, who collaborated with Allen, shared a heartfelt tribute to PnB Rock on Instagram, calling him a “pure heart and soul,” and reflected on the dangers of being in the hip-hop industry.

“I know y’all have heard it many times but being a rapper really is one of the most dangerous jobs you can have,” he wrote.

Memphis rapper Young Dolph was shot and killed in his hometown on Nov. 17, 2021, while visiting Makeda’s Homemade Butter Cookies, a bakery in South Memphis. He was 36.

Dolph’s longtime partner and mother of his children, Mia Jaye, who opened up about his tragic death in an interview with ABC News Live in January, expressed her condolences to Allen’s family after his death.

“Why does it seem like rappers and black men in general are under attack and caught off guard by predators?” she wrote on Instagram.

In 2019, Jaye launched the “Black Men Deserve to Grow Old” campaign after the shooting death of her brother to support families who have lost husbands and fathers to violent crime.

“All this s— is disturbing, out of control and heartbreaking,” Jaye wrote after PnB rock’s killing. “How will the narrative change?”

Days after Dolph was killed, Compton rapper Slim 400 was fatally shot in Inglewood, California, on Dec. 9, hours after he shared a tribute to Dolph on Instagram. He was 33.

And on Dec. 18, 28-year-old Los Angeles rapper Drakeo the Ruler was fatally stabbed backstage during the Once Upon a Time in LA festival.

On Nov. 11, 2020, rapper Mo3 was killed in Dallas only a few days after King Von, another rising star in the industry, was shot and killed in Atlanta.

Earlier that year, Brooklyn rapper Pop Smoke was fatally shot on Feb. 19 during an attempted robbery at his rental home in Hollywood Hills, California, after reportedly sharing his location on social media. He was 20 and was killed months before his debut album, “Shoot for the Stars, Aim for the Moon,” would be released. It was certified double platinum.

Los Angeles rapper Nipsey Hussle was shot and killed on March 31, 2019, at the age of 33 at his Marathon Clothing store in the Crenshaw neighborhood of Los Angeles.

And in June 2018, rapper XXXTentacion was shot and killed during an armed robbery in Deerfield, Florida. He was 20.

“After Pop Smoke there’s no way we as rappers or our loved ones are still posting locations to our whereabouts,” Nicki Minaj tweeted. “[PnB Rock] was such a pleasure to work with. Condolences to his mom & family. This makes me feel so sick.”

According to social media posts, Allen’s location at Roscoe’s was reportedly tagged on social media in a since-deleted message. Los Angeles Police Chief Michel Moore told the Los Angeles Times on Tuesday that the LAPD is investigating whether the geotagged post led to the attack.

LAPD detectives are aware of a social media post where his location was tagged, sources told ABC News and police said they are examining surveillance video to identify potential suspects.

Allen reflected on previous robbery attempts that he experienced in Los Angeles during a Sept. 2 interview on the podcast “Off the Record with DJ Akademiks,” saying he was targeted while he was out with his girlfriend and their daughter.

“Somebody shot me on Fairfax, like, mid-pandemic,” he said, while DJ Akademiks noted that robberies in Los Angeles are “bold” and can happen “broad daylight.”

“It’s just a new generation. Everybody is on some demon s–,” Allen said.

The rapper was an independent artist who gained popularity on the SoundCloud platform and released a number of hits that charted on the Billboard Hot 100. He was featured in XXL Magazine’s Freshman Class of rappers to watch in 2017.

He is known for songs like “Selfish” and “Cross Me,” featuring Chance the Rapper, which have hundreds of millions of streams on Spotify. He released his latest single, “Luv Me Again,” on Sept. 2.