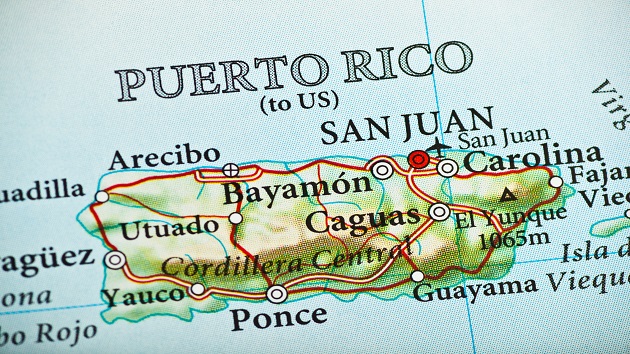 (NEW YORK) — Tropical Storm Fiona is headed for Puerto Rico and the U.S. Virgin Islands after battering the Caribbean Islands.

As of Saturday afternoon, over 45,000 customers were already without power. The island’s emergency management office even had a blackout during its Saturday morning press conference.

Hurricane watches and a flood watch have been issued for Puerto Rico. A flood watch is also in place for the U.S. Virgin Islands and the eastern side of the Dominican Republic.

The storm continues to move west at 13 miles per hour.

Fiona’s center moved through the island of Guadeloupe on Friday night, bringing heavy rain and gusty winds across the Leeward Islands.

Six to 10 inches of rain are expected for much of Puerto Rico, with the heaviest rainfall occurring overnight Saturday as Fiona passes to the south.

Sustained winds of 45 to 60 miles per hour are expected for parts of southwest Puerto Rico and St. Croix Sunday night with gusts as high as 85 miles per hour.

Rain and wind pick up after sunset Saturday in Puerto Rico, with the worst conditions lasting through Sunday afternoon. Rain and gusty winds will continue for Puerto Rico through Monday morning before conditions taper off in the afternoon.

The worst conditions in the Dominican Republic are expected late Sunday morning.

It is still uncertain which track Fiona will take after leaving the Caribbean. It is expected to become a category 1 hurricane by Tuesday evening. While most models indicate it will head toward sea, some suggest it will meander near the East Coast into the later part of next week.

The rain has already saturated areas in the southeastern part of Puerto Rico, along with the mountainous areas, where potential mudslides and winds could cause the most damage.

Resident Magda Diaz told ABC News outside a San Juan Walmart that she expects to be without power. Diaz said she loses power regularly, especially during smaller storms, and was recently in the dark for three days.

A LUMA Energy official told ABC News Saturday the company has been fixing the grid and is ready to get the grid back online if the system fails. LUMA Energy is in charge of transmission and distribution of electricity on the island.

“We were expecting power outages from Fiona … and we’re bringing in 100 more workers from our parent companies that will be landing Sunday,” LUMA official Don Cortez said.