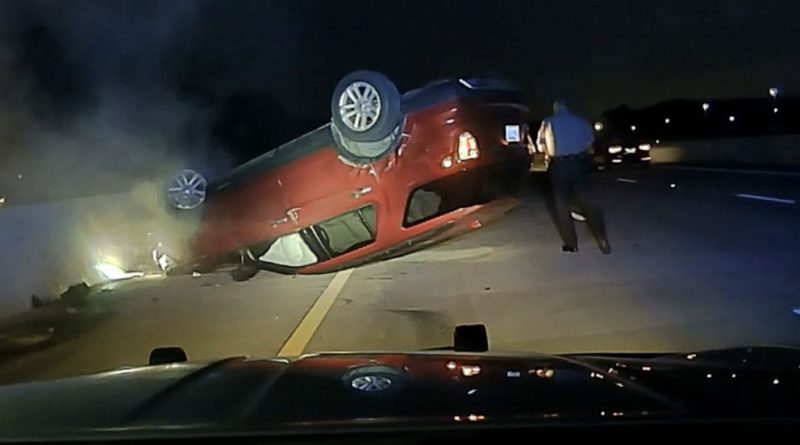 Courtesy of Denton and Zachary, PLLC

(PULASKI COUNTY, Ark.) — A woman is suing the officer who attempted to stop her for speeding, saying his PIT maneuver — short for Precision Immobilization Technique — was “negligently performed,” causing her car to overturn in a crash caught on video.

Janice Harper, who said she suffered “severe” injuries in the July 9, 2020, rollover in Pulaski County, Arkansas, filed a lawsuit last month against the trooper who stopped her, Rodney Dunn, as well as his supervisor and the director of the Arkansas State Police. The suit also names 10 John Does — whose identities are unknown to Harper — who she and her attorney, Andrew Norwood, claim were responsible for teaching Dunn the PIT maneuver and authorizing its use at the time.

On the night of the crash, Dunn allegedly clocked Harper, who was pregnant at the time, driving 84 mph in a 70 mph zone and put on his emergency lights to begin a traffic stop of her car, according to the lawsuit.

Within four seconds of Dunn’s police lights turning on, Harper claimed she hit her blinker, slowed to 60 mph and moved to the right lane. Harper argued she wasn’t able to stop safely because of a narrow shoulder and concrete barriers, the suit said.

Within 14 seconds of turning on the cruiser lights, Dunn allegedly “floored” his car and sped up to less than one car length away from the back of Harper’s car, the suit said. Within 15 seconds of the cruiser lights, Harper said she activated her emergency flashers to indicate she was looking for a place to stop, which is seen on the dash camera video provided to ABC News by Norwood.

In the video, Dunn is seen pulling up beside her and then again following behind her down the highway for a couple of minutes before bumping the back of Harper’s car. The car skidded across the road and flipped over, deploying the airbags.

In a PIT maneuver, an officer uses his or her front bumper to touch the corner of the suspect’s back bumper, causing the car to spin and come to a stop.

The suit claimed the PIT maneuver was executed 2 minutes and 7 seconds after Dunn put on his overhead lights and there were no exits or shoulders for her to stop safely before that time.

In the video after the crash, Harper can be heard saying, “I thought it would be safer to wait until the exit.” The officer replied, “No ma’am, you pull over when law enforcement stops you.”

“When I pulled up alongside of you, you saw I was a state trooper … we call it a PIT maneuver, when people flee from us … all you had to do was pull over,” the officer says.

Harper’s attorney said she didn’t pose a threat to anyone and Dunn’s use of force “was excessive” and “not reasonable under the circumstances.”

The suit alleges the state police and Dunn’s supervisor failed to train and supervise “regarding the rules, regulations, procedures and policies applicable to the proper application of PIT maneuver during a traffic stop.”

The state police did not immediately respond to ABC News’ request for comment. Arkansas State Police director told Little Rock station KARK-TV in a statement that there has been a 52% increase in drivers ignoring police traffic stops in the last five years.

“All drivers are required under Arkansas law to safely pull off the roadway and stop when a police officer activates the patrol vehicle emergency lights and siren,” the statement said, according to KARK-TV.

“Harper requested a jury trial and an award of damages, including, but not limited to, actual, compensatory, special, consequential, and punitive damages exceeding $100,000,” the suit said.