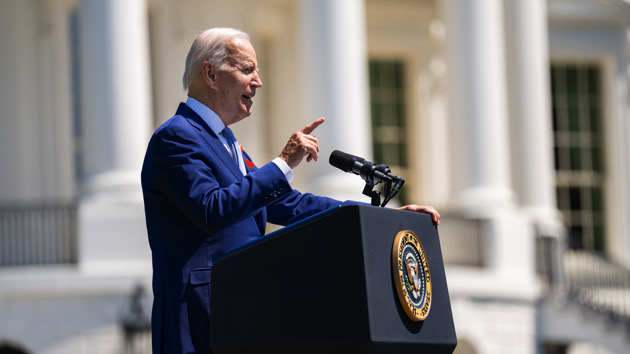 (WASHINGTON) — President Joe Biden is hosting a celebration of the Inflation Reduction Act at the White House on Tuesday, highlighting a big political win for him and congressional Democrats eight weeks before midterm elections.

The health care, climate and tax law passed Congress earlier this summer, and represented a long-sought major legislative accomplishment for Democrats as they hope to keep control of Congress.

Biden and Vice President Kamala Harris will deliver remarks marking the legislative victory at 3 p.m. from the South Lawn.

“We’re going to be celebrating with thousands of supporters tomorrow on the South Lawn of the White House,” White House press secretary Karine Jean-Pierre told reporters on Monday.

Biden touted the Inflation Reduction Act as “further proof that the soul of America is vibrant, the future of America is bright, and the promise of America is real and just beginning” when he signed the bill on Aug. 16 when Congress had left town for its summer recess.

He also criticized Republicans for their unanimous opposition to the law.

The law passed the Senate by just one vote on Aug. 7, with Vice President Kamala Harris casting the tie breaking vote. The House passed the bill the day before by a 220-207 margin.

Since Biden signed the bill last month, members of his Cabinet and other administration officials have hit the road to promote the Inflation Reduction Act. According to the White House, officials plan to travel to 23 states to tout the law.

The legislation is estimated to generate more than $300 billion in revenue by imposing a 15% minimum tax on corporations making over $1 billion and a new excise tax on corporate stock buybacks.

But it lacked many of the priorities Democrats hoped to include in a major spending package, including universal pre-K and paid family leave.

Republicans have scorned the law’s tax provisions and are specifically targeting the additional funding the law provides for the Internal Revenue Service, which they claim will lead to the hiring of 87,000 new agents to target middle class Americans. The IRS has rejected those arguments.

The GOP has also questioned how much it will reduce inflation amid various, sometimes conflicting forecasts about exactly how much the law would help reduce prices.

The nonpartisan Congressional Budget Office found the law will reduce federal budget deficits by $102 billion over 10 years but would have a “negligible” impact on inflation this year and next year.

Inflation data released on Tuesday revealed that consumer prices rose slightly in August, with the Consumer Price Index showing an 8.3% increase over last year and a 0.1% increase over the prior month.

Several Republicans seized on the new numbers out Tuesday morning.

“So much for Biden’s so-called Inflation Reduction Act. Democrats should have called it the Paycheck Reduction Act,” Sarah Huckabee Sanders, who is running for governor in Arkansas, tweeted.

Rep. Byron Donalds, R-Fla., tweeted: “Inflation is up 8.3%. Food, shelter, and electricity are all up double digits. This is crushing poor families and seniors on fixed income. What are Dems doing today…Celebrating the Inflation Reduction Act.”