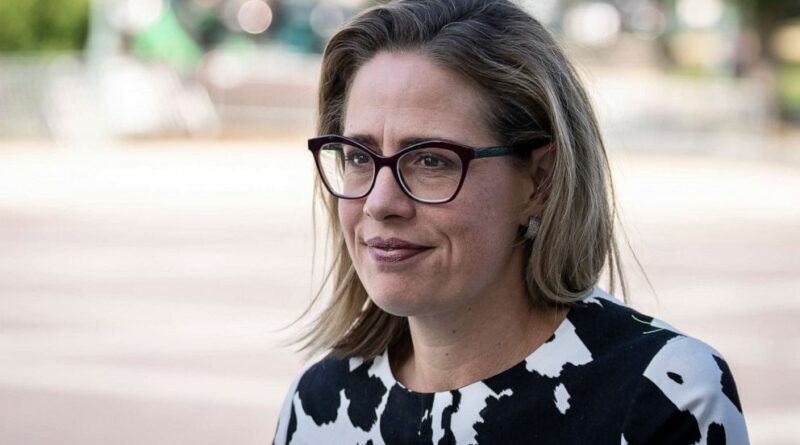 (WASHINGTON) — All eyes are on Arizona Sen. Kyrsten Sinema as Democrats look to begin debate on their major health care, tax and climate bill this weekend.

Senate Majority Leader Chuck Schumer, D-N.Y., announced Thursday that the chamber is expected to take its first vote on the Inflation Reduction Act on Saturday afternoon. The vote will be on a motion to proceed to the $740 billion bill, which if passed will kickstart up to 20 hours of debate.

Aiming to fast-track the legislation with a process known as reconciliation, under which bills can pass with a simple majority, Democrats need the support of every member of their caucus in the face of expected unanimous Republican opposition.

That’s where Sinema comes in. The moderate Arizona Democrat has occasionally thwarted the party’s agenda, along with West Virginia’s Joe Manchin. Manchin is already on board and has claimed credit for the last-minute agreement on the spending bill.

Sinema has spoken very little about the bill publicly, avoiding repeated questions by reporters on where she stands.

ABC News has learned from two sources familiar with the matter that Sinema is seeking changes to the Inflation Reduction Act, specifically the removal of a provision that would close the so-called “carried interest” loophole that allows wealthy hedge fund managers and private equity executives to pay lower tax rates on investments.

Sinema is also seeking to add $5 billion in drought resiliency.

Sinema spent Thursday shuttling back and forth from her pale pink-walled office in the basement of the Capitol to the Senate chamber – once meeting with Manchin – and to Sen. Schumer’s office. When asked if she had agreed to any bill changes, the enigmatic senator told ABC, “I can’t tell you anything.”

It’s unclear what impact such changes would have on the outcome of the legislation.

Sinema is also still waiting for word from the Senate Parliamentarian — the chamber’s nonpartisan rule-keeper — who is scrubbing the legislative text to see that each provision meets the strict test of reconciliation.

Manchin told reporters on Tuesday that he and Sinema have discussed the Inflation Reduction Act but didn’t reveal where she may land, stating “she’ll look at all of this and make her own decision.”

Amid Sinema’s silence, a video of her talking to Republican Sens. Tom Cotton and Mitch McConnell went viral this week, though the topic of their conversation is unknown.

McConnell, the Republican leader in the chamber, has sharply criticized the tax provisions in the bill. McConnell on Wednesday accused Democrats of wanting to pass “huge, job-killing tax hikes.”

Democrats have countered that the tax provisions, including a 15% corporate minimum tax, won’t increase taxes on Americans making less than $400,000 a year — one of President Joe Biden’s key campaign promises — and will target corporations and professionals they say aren’t paying their fair share.

Biden pushed for passage of the law himself on Thursday as he participated virtually in a roundtable with business and labor leaders.

Biden did speak directly to members of Congress in his remarks, urging them to pass the bill “for the American people.”