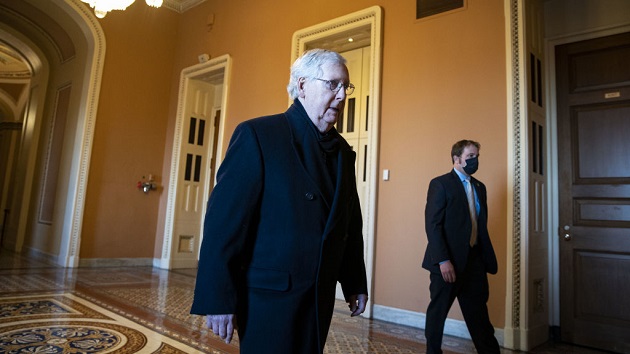 (WASHINGTON) — As President Joe Biden prepared to head to Capitol Hill on Thursday to rally Senate Democrats on election reform, a visibly angry Republican Leader Mitch McConnell fired back Wednesday, saying he didn’t recognize the man who delivered the fiery speech in Georgia on voting rights one day earlier.

McConnell characterized Biden’s speech — in which the president called for the Senate to change its rules by “whichever way they need to be changed” in order to pass Democrats’ voting bills — as “profoundly, profoundly un-presidential,” deeming the remarks a “rant” that “was incoherent, incorrect and beneath his office.”

The Kentucky Republican repeatedly took issue with Biden linking Republicans to Jim Crow-era legislation to standing in the way of election reform now, as at least 19 GOP-led states have passed laws in the last year that experts at the Brennan Center for Justice say restrict voting access.

Biden, one day earlier in Atlanta, spoke forcefully in favor of changing the Senate filibuster rule so that Democrats could pass two key voting bills that have stalled in the Senate.

“Nowhere does the Constitution give a minority the right to unilaterally block legislation,” Biden said. “The American people have waited long enough. The Senate must act.”

McConnell, in turn, closed his floor speech on Wednesday by imploring his colleagues — including an indirect call to Sen. Joe Manchin, D-W.Va., whom he has courted to change parties — that it’s up to them to defend tradition in the Senate.

“Unfortunately, President Biden has rejected the ‘better angels of our nature.’ So, it is the Senate’s responsibility to protect the country. This institution was constructed as a firewall against exactly — exactly the kind of rage and false hysteria we saw on full display yesterday,” McConnell said.

After Biden paid respects at the casket of former Senate Majority Leader Harry Reid in the Capitol Rotunda, ABC News’ Trish Turner asked him, “Mr. President, any response to Mitch McConnell who said your speech yesterday was ‘profoundly un-presidential’?”

Biden paused, turned, removed his black mask and answered, “I like Mitch McConnell. He’s a friend.”

Senate Majority Leader Chuck Schumer had promised to move toward a showdown on votes on Democrats’ voting legislation as soon as Wednesday.

The Democratic leader met Tuesday night with Arizona Sen. Kyrsten Sinema — another Democrat who has not committed to a filibuster carveout but says she supports election reforms — and then with Manchin on Wednesday morning for around an hour as he navigates a way to push through Biden’s agenda.

While acknowledging he likely doesn’t have the votes to move the bills forward, Schumer said he wants to force a vote to put senators on the record to show Americans — and history — where they stand on the issue that Democrats call vital to democracy.

A recorded vote on those bills could be seen as the first move toward another vote on changing or eliminating the filibuster on the measures, which could potentially fall on Monday given the symbolism of Martin Luther King Jr. Day.

Ahead of his visit to Capitol Hill on Thursday, Biden in Atlanta on Tuesday attempted to shame the 16 sitting Republicans who voted to extend the Voting Rights Act before — to support voting rights now.

“Not a single Republican has displayed the courage to stand up to a defeated president to protect America’s right to vote, not one,” he said. “Not one.”

While Biden, having served in Congress for 36 years, has defended the filibuster in the past, he changed his tune regarding election reforms, saying Tuesday that a minority of senators shouldn’t be permitted to block actions on voting rights for all Americans.