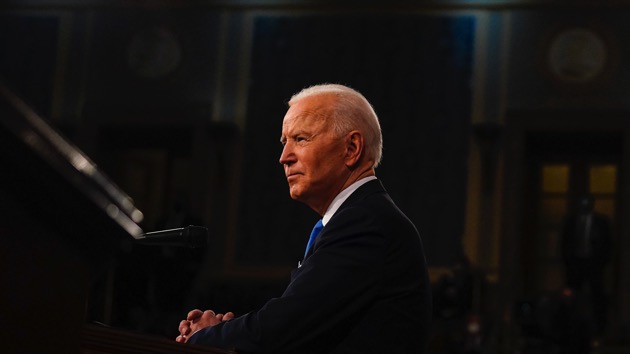 (WASHINGTON) — As President Joe Biden headed to Capitol Hill on Thursday in an attempt to persuade Democratic lawmakers to back a major change to the Senate’s rules that would allow voting rights legislation to move forward, two key Democratic senators again rejected the idea.

Making the trip risked his political capital, after delivering an impassioned speech Tuesday in which he said there was “no option” except for senators to do away with the filibuster — a rule that requires 60 votes, rather than a simple majority of 50, to advance most legislation — if the bills could not be advanced another way.

“I’ve been having these quiet conversations with members of Congress for the last two months,” he said Tuesday. “I’m tired of being quiet!”

But Biden quickly faced a losing battle in transforming his rhetoric into action as a pair of Democratic senators — Joe Manchin of West Virginia and Kyrsten Sinema of Arizona — repeated their steadfast opposition to changing the filibuster.

Even as he headed to Capitol Hill Thursday, Sinema made a Senate floor speech saying she would not support changing the rule.

“There’s no need for me to restate my longstanding support for the 60-vote threshold to pass legislation. There’s no need for me to restate its role in protecting our country from wild reversals of federal policy,” Sinema said. “This week’s harried discussions about Senate rules are but a poor substitute for what I believe could have and should have been a thoughtful public debate at any time over the past year.”

“Demands to eliminate this threshold from whichever party holds the fleeting majority amount to a group of people separated on two sides of a canyon, shouting that solution to their colleagues,” she added.

And soon after, Manchin told reporters he thought Sinema did a “great job” in her floor speech and said that the Senate needs “rules changes” but “not getting rid of the filibuster” — a blow to Biden before he even arrived on the Hill for the Democratic caucus lunch.

After emerging from the closed-door meeting with Senate Democrats, Biden said, “The honest to God answer is, I don’t know whether we can get this done.” He added, “I hope we can get this done, but I’m not sure. But one thing for certain, one thing for certain. Like every other major civil rights bill that came along, if we miss the first time, we can come back and try it a second time. We missed this time.”

In the evening, Manchin and Sinema met with Biden at the White House for over an hour.

Despite the holdouts in his own party, Biden has made clear this week who he thinks would be to blame if he’s unsuccessful in getting voting rights through: Republicans, who he said Tuesday were choosing the side of standing in the way of advancing civil rights if they block the bills.

And all 50 Republican senators oppose the bills, which Democrats say are needed to create national standards for making voting more accessible and to put a check on new state laws that make it more difficult for members of minority groups and others to cast their ballots.

Senate Minority Leader Mitch McConnell appeared visibly angry Wednesday as he blasted Biden’s speech, calling it “profoundly, profoundly unpresidential.” He deemed the remarks a “rant” that “was incoherent, incorrect and beneath his office.”

When asked by ABC News about McConnell’s rebuke, Biden said: “I like Mitch McConnell. He’s a friend.”

Despite Biden’s support for a carveout to the filibuster, Senate Majority Leader Chuck Schumer announced Wednesday that Democrats planned to use existing rules to prevent Republicans from using the filibuster to block debate from starting.

House Democrats are expected to replace an existing piece of legislation — one that would not require a vote for debate to begin — with both the Freedom to Vote Act and the John Lewis Voting Rights Advancement Act, allowing them to bypass Republicans’ attempts to block the legislation from debate.

“The Senate will finally debate voting rights legislation, and then every Senator will be faced with a choice of whether or not to pass the legislation to protect our democracy,” Schumer wrote in a memo to the Democratic Caucus Wednesday.

Still, Republicans will have another opportunity to block the bill from passing by filibustering before debate ends. Without changing the rules around the filibuster, the legislation will still require 60 votes to pass.

Biden, a veteran of the Senate and a self-described “institutionalist,” has undergone an evolution in his view of the filibuster during the first year as president.

In an interview in March, Biden told ABC News’ George Stephanopoulos that he supports bringing back the “talking filibuster,” a version of the rule that would require a senator to “stand up and command the floor” and “keep talking” in order to hold up legislation.

Biden went further during a CNN town hall in October, noting that he would be open to “fundamentally altering” the filibuster on issues of particular consequence like voting rights.

But Biden’s most definitive comments came in December while speaking with ABC News’ David Muir, saying he would support a carveout to the filibuster in order to pass the voting rights legislation if that was the “only thing” standing in the way.