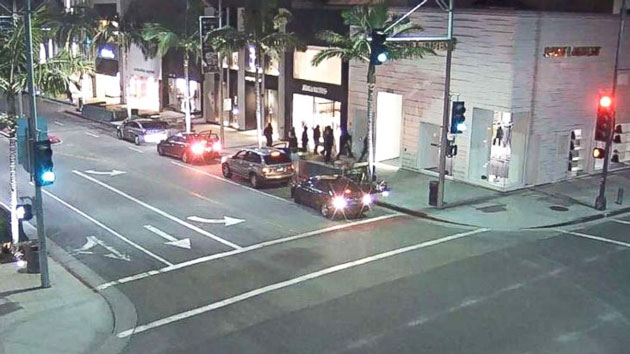 Beverly Hills Police Department(BEVERLY HILLS, Calif.) — Police are looking for at least a dozen thieves who drove up to a pricey storefront in Beverly Hills, California, and bashed in the windows before making off with armfuls of designer clothes.

The theft took place just before 4 a.m. on Tuesday at Zadig & Voltaire on the 400-block of North Rodeo Drive, according to the Beverly Hills Police Department. Security video released by police shows four vehicles drive up to the store and at least a dozen people jump out and immediately begin slamming on glass doors of Saint Laurent’s Men’s store with a sledgehammer.

After repeated attempts to bust through that storefront failed, the group moved to Zadig & Voltaire next door and broke through. The people can be seen taking armloads of clothing and loading it into the four cars.

Beverly Hills police quickly responded to the burglary and pursued one of the fleeing cars to Los Angeles, where it stopped and “four to six males” exited the vehicle and took off on foot, police said. All of the suspects escaped, but the car and “several items of stolen merchandise” were recovered.

Police are still looking for the other three vehicles: a gray/silver two-door BMW sedan, a gray/silver BMW X5 SUV and a black four-door Honda Civic.