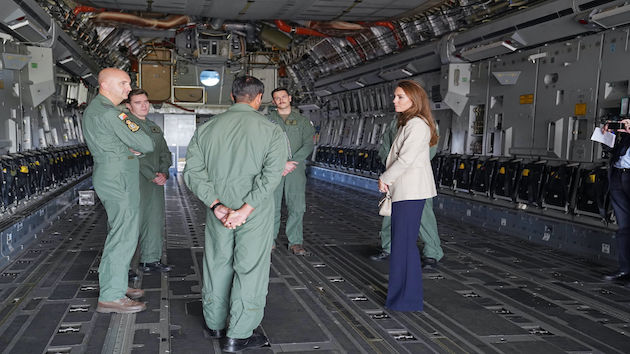 (LONDON) — Duchess Kate made her first public appearance in more than two months on Wednesday.

The Duchess of Cambridge, 39, visited RAF Brize Norton in Oxfordshire, England, to meet with those involved in the United Kingdom’s evacuation of thousands of people from Afghanistan.

In the wake of the Taliban’s takeover of the country, the Royal Air Force undertook the largest humanitarian aid operation in more than 70 years as the UK ended its 20-year military campaign in Afghanistan.

Operation PITTING saw the RAF fly out more than 15,000 people from Kabul between Aug. 14 to Aug. 28. More than 850 people arrived in the country via RAF Brize Norton.

During her visit, the duchess met with everyone from military personnel, including RAF aircrew and medics, to civilians and volunteers who helped evacuees in Operation PITTING through a repatriation center at the base. In addition to the RAF, the Royal Navy, the British Army and aid organizations assisted in the mission.

This is the first time Kate has been photographed in public since appearing at two major sporting events on July 11.