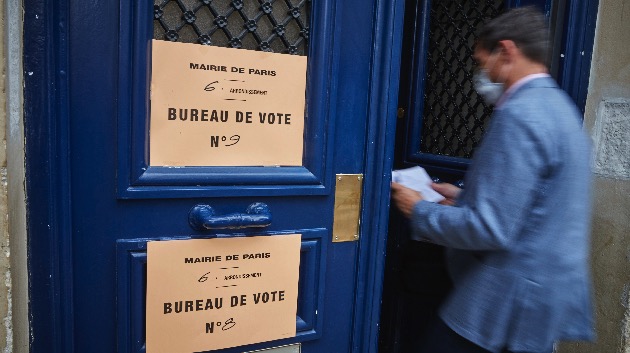 (PARIS) — What would you do if your ideal presidential candidate was only a few swipes away?

That’s the promise of the French app Elyze, which was created by students Gr?goire Gazcarra, 22, and Fran?ois Mari, 19, who will participate in their first presidential election in less than three months.

Elyze is for voting, not dating, but like the popular dating app Tinder, it asks users to swipe right or left — right to agree, left to disagree — with more than 500 anonymous propositions. It then ranks each user’s matches by affinity to each of the dozen candidates. In addition, the app offers a short explanation tab for each topic, and a third option if the user wants to pass rather than agree or disagree.

With the first round of the French presidential elections around the corner, Elyze’s founders want to convince young French people to vote on April 10.

“I see around me that my friends have a more distanced, even more critical relationship with the political class, and that many people do not go to vote because they have the impression that politics no longer has an impact on their daily lives, that it is no longer able to improve our lives, and that their voices, their votes, will not change anything or even are not legitimate,” Gazcarra told ABC News.

Elyze was invented to convince citizens, particularly young ones, “whatever their political sensitivity, their personal background, that their voice is worth hearing,” Gazcarra added.

Abstention, especially among young voters, regardless of the type of election, has been a major issue in France for many years now, with notably 82% of young people ages 18 to 35 having abstained from voting during the regional elections last year.

“Our generation is disconnected from social issues and presidential elections … and multiple initiatives tried to resolve these problems, but they did not use our generation’s codes, like the swipe … So we try to use new codes,” Mari, who first got interested in politics during the first lockdown, told ABC News.

Gazcarra, who founded the non-partisan movement “Les Engag?s” in 2017 to “give young people a taste for politics,” and co-created the NGO A Vot? for “the defense of civil rights and democratic progress,” is convinced that, even though many French politicians are on social media, education is to blame for young people’s lack of interest and involvement in politics today.

“Our belief is that our generation is no less engaged than the previous ones, but it engages differently. … And we are convinced that to reconcile our generation with politics, we must reclaim its codes,” Gazcarra said. “We must talk to young people where they are, especially in digital spaces. … there is still a challenge for politicians to truly understand how young people interact on these platforms and what they expect from them. That said, our drive with Elyze was … to explain that the real issue is that of pedagogy.”

Since the start of his mandate, French President Emmanuel Macron has demonstrated his mastery of social media, and in recent months has increased his efforts toward connecting with young people. Back in May, in an unprecedented communication exercise, the president shot a video with famous YouTubers McFly and Carlito at the ?lys?e palace, following a challenge to reach 10 million views on their video about barrier measures against COVID-19.

Last summer, in a counter-offensive after the anti-health pass mobilization, he defended, phone in hand, the COVID-19 vaccination from Fort Br?gan?on, in a virtual Q&A with young people on TikTok and Instagram, while wearing a T-shirt.

With the rising number of COVID-19 cases amid the omicron surge in France, the presidential candidates have had to adjust their campaigns to follow the recent health guidelines. In the opposition, The Republicans (LR) cancelled a 5,000-person gathering to induct their candidate, Val?rie P?cresse, on Dec. 11.

While Elyze’s creators hope to soon reach 1 million users, a recent Ifop poll revealed that more than half (59%) of 18- to 30-year-olds plan to not vote in the presidential election.