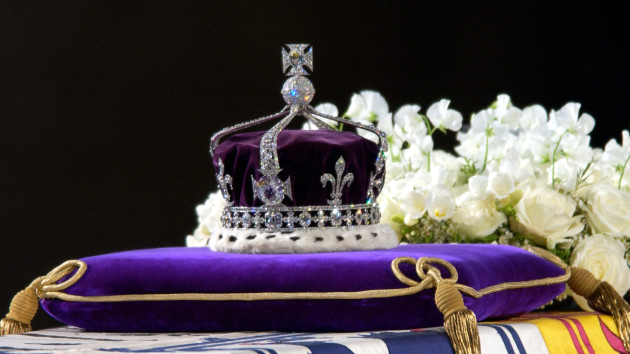 (LONDON) — Questions around rare diamonds that are centerpieces of the British crown jewels have emerged in the wake of Queen Elizabeth II’s death.

Two royal crowns and a scepter are adorned with some of the most famous diamonds in the world, obtained by the British empire over 100 years ago, and intertwined with its history of imperialism.

The 105.6-carat Kohinoor diamond — also spelled Koh-i-noor or Koh-i-N?r — was mined in India thousands of years ago and is one of the largest cut diamonds in the world.

Rumored to be cursed for men, it was initially worn as a brooch by Queen Victoria and later mounted in the crowns of Queen Alexandra and Queen Mary. It is currently set in a crown that was created for Queen Elizabeth the Queen Mother for her coronation as queen consort in 1937. She wore it again at the coronation of her daughter, Queen Elizabeth II, in 1953. It is on public display in the Jewel House at the Tower of London and will reportedly be worn by Camilla, queen consort, at King Charles III’s coronation.

The Great Star of Africa is the biggest stone cut from the Cullinan diamond, which was discovered in South Africa in 1905 in a mine owned by its namesake, Thomas Cullinan, and is the largest gem-quality uncut diamond ever found. Also known as Cullinan I, the enormous, 530.2-carat drop-shaped diamond was added to the Sovereign’s Sceptre with Cross, a sacred object that dates back to the 1600s used during coronation ceremonies, in 1910. It also is on public display in the Jewel House at the Tower of London.

The second-largest stone cut from the Cullinan is set in the Imperial State Crown, which was made for the coronation of King George VI in 1937 and is worn by the monarch upon leaving Westminster Abbey after the coronation. The 317-carat Second Star of Africa, also known as the Cullinan II, is the most valuable stone in the crown, which is currently set atop Queen Elizabeth’s coffin as she lies in state at Westminster Hall.

Among the intrigue of the jewels is their value, which is unclear. Though their rarity and history would inarguably make them worth a fortune.

Following the queen’s death last week, there have been renewed calls on social media for the diamonds to be returned to their respective countries of origin; #kohinoor was trending on Twitter.

“Would now be a bad time to ask for the Kohinoor back,” one person asked.

“RIP Queen. Send back the Kohinoor,” said another.

British-Indian author and political commentator Saurav Dutt tweeted that the British Empire is a “vestige of a bruised and thankfully desiccated past,” and that the Kohinoor diamond “should be dispatched back to Indian hands with haste and alacrity.”

Meanwhile, Snopes investigated the claim that the Great Star of Africa was stolen. It concluded that “would appear to be a matter of opinion.”

According to Brittanica, the Cullinan diamond was purchased by the government in Transvaal, South Africa, where it was found, and “presented (1907) to the reigning British monarch, King Edward VII.”

The Royal Collection Trust states that the diamond was presented to the king “as a symbolic gesture to heal the rift between Britain and South Africa after the Boer War.”

The Kohinoor diamond passed through many hands over centuries. India, Pakistan, Iran and Afghanistan have all claimed ownership and called for the British to surrender it. In 2016, the Indian Culture Ministry said it would make “all possible efforts” to have the diamond returned to India.

Historic Royal Palaces, which oversees the Tower of London, notes that the diamond has a “turbulent history” and is a “symbol of conquest.”

“The East India Company took the jewel from deposed Maharaja Duleep Singh in 1849, as a condition of the Treaty of Lahore,” it said. “The treaty specified that the jewel be surrendered to Queen Victoria.”

The British government has rejected pleas to return the Kohinoor; during a 2010 trip to India, former Prime Minister David Cameron said it was “staying put.”

While London institutions like the British Museum and Horniman Museum wrestle with contested artifacts, some experts, including Dutt, do not see the royal establishment relinquishing its jewels anytime soon.

The royals “would essentially be eviscerating themselves” if they turned over the Kohinoor, he told Time.