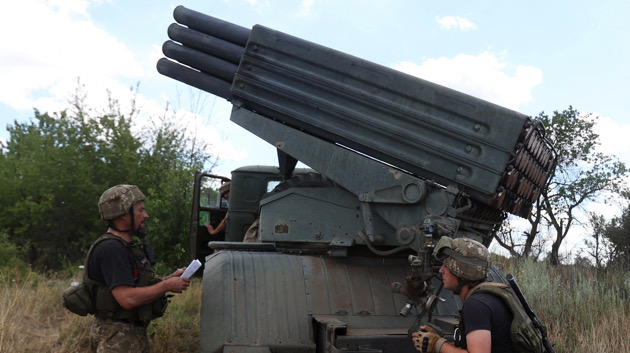 The vessels are bound for Turkey, the United Kingdom and Ireland, with a combined total of 58,000 tons of Ukrainian corn onboard. All three ships will undergo inspection in Istanbul, as is required under the grain exports deal, according to the ministry.

The United Nations confirmed Thursday that three more grain ships — two from the port of Chornomorsk and one from Odesa — were cleared to depart through the designated “maritime humanitarian corridor.”

On Monday, the first commercial vessel carrying Ukrainian grain set sail from Odesa’s port under the so-called Black Sea Grain Initiative, bound for the Lebanese port of Tripoli. Last month, Russia and Ukraine signed separate agreements with Turkey and the U.N. to allow Ukraine to resume its shipment of grain from the Black Sea to world markets and for Russia to export grain and fertilizers.

“We have documented a pattern of Ukrainian forces putting civilians at risk and violating the laws of war when they operate in populated areas,” Amnesty International Secretary-General Agn?s Callamard said in a statement. “Being in a defensive position does not exempt the Ukrainian military from respecting international humanitarian law.”

Between April and July, Amnesty International researchers spent several weeks investigating Russian airstrikes in the Kharkiv, Donbas and Mykolaiv regions of Ukraine. The organization inspected strike sites, interviewed survivors, witnesses and relatives of victims of attacks, as well as carried out remote-sensing and weapons analysis. Throughout the probe, researchers found evidence of Ukrainian forces launching strikes from within populated residential areas as well as basing themselves in civilian buildings in 19 towns and villages in the regions, according to Amnesty International.

The organization said most residential areas where Ukrainian soldiers located themselves were miles away from front lines, with viable alternatives that would not endanger civilians, such as nearby military bases or densely wooded areas, and other structures further away. In the cases documented, Amnesty International said it is not aware of the Ukrainian troops asking or assisting civilians to evacuate nearby buildings in the residential areas, which the organization called “a failure to take all feasible precautions to protect civilians.”

Amnesty International, however, noted that not every Russian attack it documented followed this pattern. In certain other locations in which the organization concluded that Russia had committed war crimes, including in some areas of the city of Kharkiv, the organization did not find evidence of Ukrainian forces located in the civilian areas unlawfully targeted by the Russian military.

Aug 03, 11:21 AM EDTInspectors in Turkey clear 1st grain ship from Ukraine, but no sign of more

The Sierra Leone-flagged Razoni set sail from the Ukrainian port city of Odesa on Monday, with more than 26,000 tons of Ukrainian corn on board. The vessel docked off the coast of Istanbul late Tuesday, where it was required to be inspected before being allowed to proceed to its final destination, Lebanon.

A joint civilian inspection comprising officials from Russia, Turkey, Ukraine and the U.N. inspected the Razoni on Wednesday morning, checking on the cargo and crew. After three hours, the team cleared the ship to set sail for Lebanon, according to the U.N. said.

“This marks the conclusion of an initial ‘proof of concept’ operation to execute the agreement,” the U.N. said in a statement Wednesday.

It’s the first commercial vessel carrying Ukrainian grain to safely depart the Black Sea since the start of Russia’s ongoing offensive, and the first to do so under the so-called Black Sea Grain Initiative. Last month, Russia and Ukraine signed separate agreements with Turkey and the U.N. to allow Ukraine to resume its shipment of grain from the Black Sea to world markets and for Russia to export grain and fertilizers.

In a statement Wednesday, U.S. Secretary of State Antony Blinken called Razoni’s journey a “significant step” but noted that “this is only a first step.”

No other grain shipments have departed Ukraine in the last two days and officials on all sides have offered no explanation for that delay.

The U.N. said Wednesday that three Ukrainian ports “are due to resume the export of millions of tons of wheat, corn and other crops,” but didn’t provide further details.

Since Russian forces invaded neighboring Ukraine on Feb. 24, the cost of grain, fertilizer and fuel has skyrocketed worldwide. Russia and Ukraine — often referred to collectively as Europe’s breadbasket — produce a third of the global supply of wheat and barley, but a Russian blockade in the Black Sea combined with Ukrainian naval mines have made exporting siloed grain and other foodstuffs virtually impossible. As a result, millions of people around the world — particularly in Africa and the Middle East — are now on the brink of famine.

Two-thirds of residents have fled eastern Ukraine’s Donetsk Oblast since the start of Russia’s invasion in late February, according to the regional governor.

“It cannot be described with words,” Zelenskyy said.

Ukrainian forces cannot yet “completely break the Russian army’s advantage in artillery and manpower, and this is very noticeable in the fighting,” he added.

Last month, Ukrainian Deputy Prime Minister Iryna Vereshchuk said 200,000 civilians must be evacuated from the Donetsk Oblast before the weather gets colder, as there is no proper electricity or gas supply in the area for residents to heat their homes. Russian forces are also destroying heating equipment, according to Vereshchuk.

Zelenskyy has ordered the mandatory evacuation of Donetsk Oblast residents, urging them to leave as soon as possible. Those who comply will be compensated.

“The more people leave [the] Donetsk region now, the fewer people the Russian army will have time to kill,” he said.

Although many refuse to go, Zelenskyy stressed that “it still needs to be done.”

Mandatory evacuation from Donetsk Oblast began on Aug. 1. The first two trains evacuated 224 people to the central Ukrainian city of Kropyvnytskyi, according to local officials.