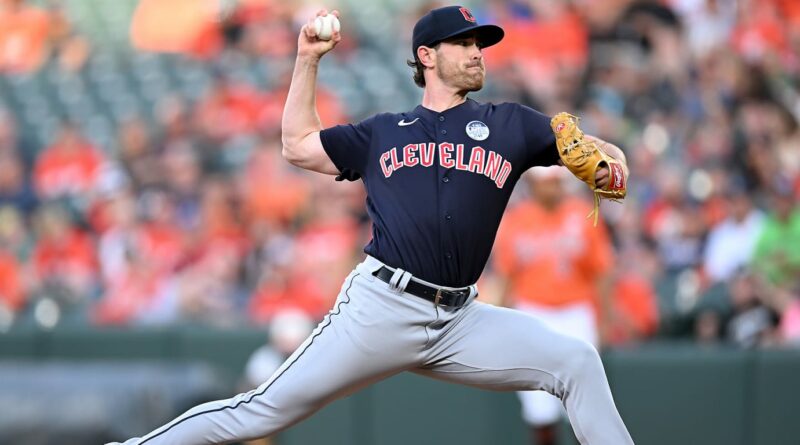 BALTIMORE — Arms high above his head, Shane Bieber pumped both fists as he strolled off the mound, elated at the sight of Oscar Mercado horizontal on the right-field grass, the line drive Ryan Mountcastle had pegged for the gap somehow secured in his glove. Behind Bieber, Austin Hedges also lapsed into minor, momentary celebration. Then they recomposed themselves and escorted each other to the dugout, having only completed the fourth inning.

“I screamed a little bit,” Bieber admitted later. “I’m thinking [no-hitter] from pitch one. Until I give one up.”

Such shows of emotion from both pitcher and catcher are rare so early in a five-run game. But the way Bieber was dealing, the battery already knew how much the hit Mercado took away might matter. That it ultimately didn’t lead to immortality is no knock on Bieber, who flirted with history for much of the Guardians’ 6-3 win over the Orioles on Friday night at Camden Yards.

Even more important for the Guardians: Their ace is beginning to look like vintage Bieber again.

“I thought tonight, more than any start we’ve seen, he looked in command,” manager Terry Francona said. “He stayed in his delivery. I don’t care what the gun said, the fastball had life. The slider was good … I thought he was terrific.”

Holding the O’s hitless for 5 2/3 innings and to one hit until the eighth, Bieber struck out 11 over seven dominant frames before Baltimore rallied against Cleveland’s bullpen late. He retired 14 straight at one point and 18 of 19 from the second to the eighth, carving nearly three times through Baltimore’s lineup while the Guardians racked up 14 hits behind him.

The two eighth-inning runs charged to Bieber marked his first allowed in 24 career innings against the Orioles. But by then the Guardians had plenty of cushion, courtesy of two run-scoring hits each from Owen Miller and Josh Naylor.

“Even from the first inning, it looked like it wasn’t a fight for him,” Francona said. “Then he went out and competed, as opposed to trying to think through it. That was really encouraging.”

The result was the latest in a line of strong outings from the 2020 Cy Young Award winner, who got off to a slow start this season after missing much of last year’s second half due to injury. Bieber improved to 3-3 with a 3.12 ERA through 10 starts; after pitching to a 4.13 ERA over his first six, he’s posted a 1.93 ERA over his last four, with a 33-7 strikeout-to-walk ratio across 28 innings.

“I feel like each start we’re getting closer and closer to where we need to be, where I want to be,” Bieber said. “It feels good to feel for some things through the first inning, maybe two, and then step on the gas a little bit. That’s what we were able to do tonight.”

In fact, aside from a seven-run clunker against Toronto on May 7, Bieber owns a 2.20 ERA (14 ER/57 1/3 IP) in nine other starts this season. He’s allowed two earned runs or fewer in seven of 10 starts overall, and three or fewer in 34 consecutive road starts. That’s the longest such streak since earned runs became an official stat in 1913.

“We didn’t do a whole lot against Bieber,” Orioles manager Brandon Hyde said. “It was more of a relief we got a hit against a guy that was in complete control … that’s as dominating as I’ve seen here in a while.”

Historically, when Bieber has found his groove, it’s the Orioles who have found themselves on the long end of it. Perhaps the best start of Bieber’s career came at home against Baltimore in May 2019, his 15-strikeout complete-game shutout kickstarting a breakout year for the ascendant ace. Later that season, Bieber fanned 11 over eight shutout innings in another dominant display, this time in Baltimore. All told, he owns a 0.75 ERA and 37-2 strikeout-to-walk ratio in three starts against the O’s.

And about that velocity: Bieber’s four-seamer averaged 90.7 mph Friday, precisely his season average. It remains 2 mph down from 2021 and nearly 4 mph down from 2020, per Statcast. But he’s still getting results due to a revamped pitch mix that has him throwing predominantly sliders, including 40 percent Friday, his fourth-most ever in a start. All three others have come this season. He got 14 whiffs with the slider Friday and 23 whiffs overall, tied for seventh-most in a start in his career.

“Obviously, he’s got amazing stuff,” said Trey Mancini, who broke up Bieber’s no-hitter with a single. “Even though his velo is down maybe a couple miles an hour this year, he’s still every bit of the pitcher that he’s always been. He’s one of the best pitchers in the game for a reason. He knows how to pitch. He knows how to locate, and he’s just got great stuff. He’s really good, and it’s a night where we have to tip our cap to him, because he did a great job against us.”