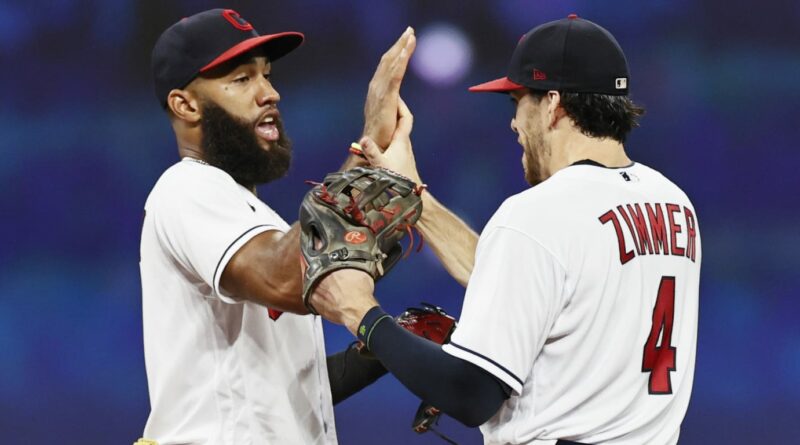 GOODYEAR, Ariz. — Although camp is freshly underway, the Guardians are already 2 1/2 weeks from Opening Day and have to start thinking about paring their roster down.

On Monday, the Guardians began sending some of their big league pitchers to the mound for the first time of Cactus League play — a trend that’s going to continue, as Zach Plesac is slated to get the start on Tuesday. But if there’s one thing that won’t require many decisions this spring, it’s the rotation. Outside of the starting pitchers, the Guardians will have a lot to figure out in the next 14 or so days.

Who’s battling for what? Let’s break it down.

The rotation: Shane Bieber, Aaron Civale, Plesac, Cal Quantrill, Triston McKenzie
Unless an injury occurs during Spring Training, there’s no question that these five will make up the starting rotation at the beginning of the season.

Center field: Myles Straw
Guardians manager Terry Francona had no hesitation declaring Straw the team’s center fielder at the beginning of camp. It’s been a handful of years since the club has had an everyday outfielder, and it feels as though Straw can be that answer — especially defensively — in center.

Catcher: Austin Hedges
After Cleveland declined Roberto Perez’s option for the 2022 season, there was no doubt that Hedges would be the main guy behind the dish, and he couldn’t be more excited to lead a strong rotation and an inexperienced bullpen. Luke Maile will likely serve as his backup.

Third base: Jose Ramirez
Despite the trade rumors, Ramirez appears to be a lock in the Guardians’ 2022 Opening Day lineup, and no one will be taking the hot corner from the All-Star switch-hitter.

Designated hitter: Franmil Reyes
Although he’s attempting to get some time in the outfield again this season, Reyes will see the majority of his time as the team’s DH.

First base: Bobby Bradley
Last year at this time, Bradley was in a tight battle with Jake Bauers for the starting first-base job. But because Bradley had an option and Bauers didn’t, it made it easier on the club to be able to exhaust all choices before making a decision. Now, Bradley is out of options and the team will need to determine if he’ll be part of its future at first base. Other than Josh Naylor, who’s working his way back from surgery on his lower right leg last year, the club doesn’t have any other Major League-ready first baseman, considering corner infielder Jhonkensy Noel (the Guardians’ No. 25 prospect per MLB Pipeline in 2021) hasn’t been above High-A Lake County. So Bradley will likely have some time to find his rhythm with the big league club, but he’ll need to find more consistency at the plate to be a long-term fixture.

Corner outfield: Bradley Zimmer, Josh Naylor, Oscar Mercado, Richie Palacios, Steven Kwan, George Valera, Amed Rosario, Daniel Johnson, Reyes
No. 3 prospect Nolan Jones is still working through some injuries, and Will Benson, Oscar Gonzalez and Valera (No. 2 prospect) may need some more time in the Minors before getting their first call-up. Assuming Naylor is healthy by Opening Day, it wouldn’t be surprising if he lands the right-field job. And while the team has had a few seasons to see what Mercado and Zimmer can bring to the table, it now has to try to evaluate guys like Palacios (who’s moving from the infield) and Kwan in a limited time frame to determine if they could fill the other corner.

Middle infield: Rosario, Andres Gimenez, Gabriel Arias, Yu Chang, Ernie Clement, Owen Miller, Tyler Freeman, Brayan Rocchio
Here’s where it gets trickier. No. 12 prospect Jose Tena will need some more time in the Minors, and Freeman, the club’s No. 1 prospect, is still working through a slight setback with his left shoulder. Rocchio (No. 7 prospect) could also need more time, but Arias (No. 4), Gimenez, Rosario and Miller could be in a tight battle throughout camp, as Clement and Chang (and Miller) compete for utility roles.

Bullpen: Emmanuel Clase, Anthony Gose, James Karinchak, Nick Sandlin, Trevor Stephan, Logan Allen, Sam Hentges, Eli Morgan, Cody Morris, Tobias Myers, Konnor Pilkington, Justin Garza, Ian Gibaut, Jake Jewell
Let’s make things even trickier. Clase is a lock at the back end of the ‘pen, and if Karinchak shows his second-half struggles from last year are in the rearview mirror, he’ll join Clase. Since Gose is out of options, he’ll certainly get a chance to be a regular relief option early in the season. Sandlin and Stephan are the next closest names to locks, but the rest of the bullpen has yet to be sorted out. Alex Young and Kirk McCarty are non-roster invitees who could become options for the club. Allen and Hentges could be used in long relief, especially in the first few series, as the starters build their pitch counts. But the bullpen could be the biggest puzzle the team will have to put together prior to Opening Day.